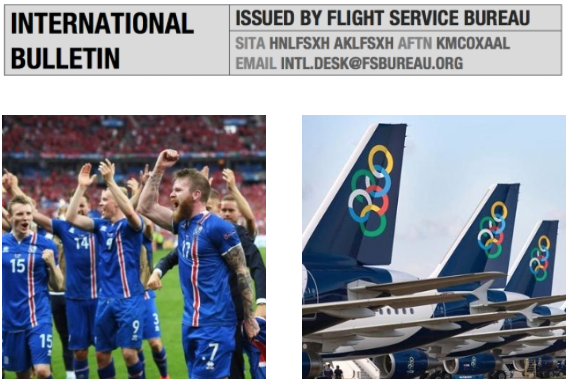 
Iceland Strike Over 27JUL It’s been promised a few times over the last few months but then closures continued – but what we can tell you is that: There was an agreement on July 18,  that appears to be holding. Read the article.

Brazil Olympic Ops Update 27JUL The opening ceremony of the 2016 Olympics in Brazil is on 5AUG, in Rio de Janeiro. There are a ton of airspace restrictions, slot controlled airports, and changes from 19JUL-23SEP. Here is a summary.

LRBB/Bucharest FIR Crews have experienced several ‘fake’ calls on 121.5 within the Bucharest ACC airspace. No reports of control instructions being issued, but operators should be aware of the situation.

SKZZ/Colombia On 25 July, the Colombian health ministry declared the Zika epidemic to be over in the country. The epidemic began in September 2015 and peaked in March of this year. A total of approximately 100,000 Colombians were infected. While authorities believe outbreaks will continue, the number of cases reported is expected to continue to decline.

LTBA/Istanbul has issued a long list of restrictions to discourage additional flights from operating to LTBA. New requests for charter flights are denied. LTBA cannot be carried as an alternate on your FPL.

TNCC/Curacao has daily work on the main runway throughout August. Some closures and shortened lengths. Check for latest with Airport operations on CAP OPS(+5999) 8391030/31/32.