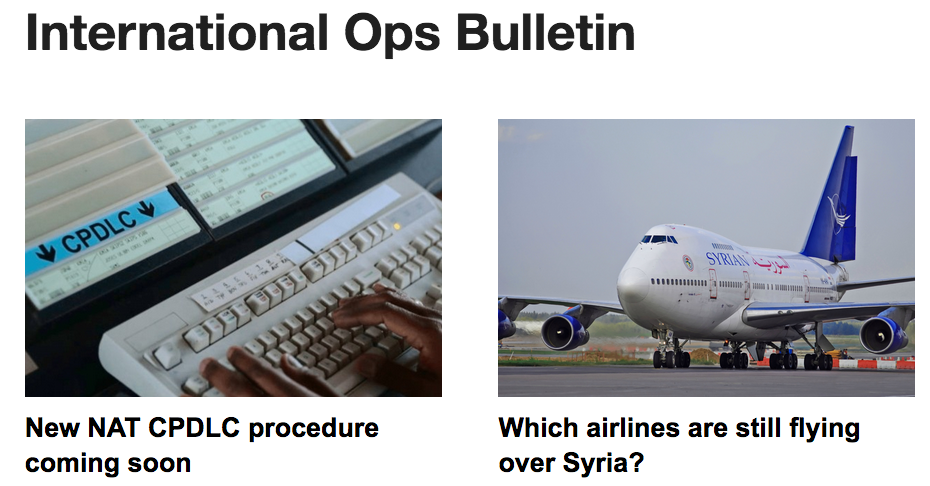 LFZZ/France Yet another French ATC strike is planned for the LFMM/Marseille sector this coming weekend – from the morning of Sat May 5 until the morning of Mon May 7. More info here.

LIZZ/Italy All airports in Italy and all ACC’s are planning a strike for Tuesday May 8th, from 08-16Z. Overflights, and intercontinental flights (eg US arrivals) are exempt. More info here.

LFZZ/France Air France have cancelled 15 percent of its flights today, May 3, due to ongoing staff strikes. Paris airports worst affected.

KHPN/White Plains On Sat May 5, the airport will be running a full scale plane crash exercise from 11am-1pm, which will close the second runway 11/29 between those times.

KSAV/Savannah Flight operations have resumed following the C130 crash on a nearby highway on May 2, which killed all nine people on board.

FTTJ/N’Djamena No jet fuel available until May 10 at the earliest.

OSZZ/Syria Overnight missile attack on a number of military sites in northern Syria on Apr 30, most likely carried out by Israel. Eurocontrol NM has updated the Syria ‘warning’ notice to read: “Taking account of potential military activity and the possibility of intermittent disruption of radio navigation equipment, appropriate risk assessment needs to be undertaken when planning flight operations in the Eastern Mediterranean area”. More info here.

KJFK/New York Following the delays and baggage chaos caused by the January storm, the airport is introducing new rules for flights during winter storms – airlines will now have to get permission to land before the flight leaves its origin; and all six terminals will have to share equipment, staff and gates.

OEZZ/Saudi Arabia Once again increased missile activity in the southwest of Saudi, with 35 missile launches this year by rebels in Yemen, 14 of them in April. About the same amount as Aug 2016 and Dec 2015, but most are now being shot down by Saudi Patriot missiles; only 3 have struck Saudi soil this year. OERK/Riyadh continues to be on the radar for the Houthis. Of most concern, an F-15 was hit by a SAM over Yemen on 21 Mar, fired from OYSH airport. There is definitely a risk to operations in Saudi airspace, even outside the Scatana area. More info here.

WAMG/Gorontalo Operational again after a 2 day closure, B737 removed after overrun.

HKNW/Wilson Potholes on the taxiways and part of the runway at Wilson – Nairobi’s second airport. A DHC-8 Dash 8 recently got stuck in the mud, trying to avoid them. More info here.

YSCB/Canberra Canberra will have CAT II ILS from July. Some WIP on lights and systems in the interim.

EPKK/Krakow LOT Airlines unions have called off a strike that was planned to start on May 1st, after airline management won a court injunction, arguing that the strike action was illegal.

VTUU/Ubon Ratchathani Operational again after a fire on May 1st forced the airport to close.

CYYG/Charlottetown The main Rwy 03/21 will be closed for repair until Jul 28. The other Rwy 10/28 will remain open, but has no ILS, so the airport has warned more planes may have to be rerouted this summer in the event of adverse weather and poor visibility.

EFJO/Joensuu No Jet A1 available over the weekend May 4-6.

KIMT/Iron Mountain Airport closed until May 6 for runway repair. But even after that, the main runway 01/19 will be closed until May 15. In the meantime, the other runway 13/31 will be open, but that’s only 3800ft long.

VTSP/Phuket The airport is not accepting any new requests for flights until May 7. This is due to congestion caused by the runway being closed for repairs each night, meaning all the airlines are having to reschedule their flights.

OYZZ/Yemen You might come across this nasty little Notam issued by Yemen, cunningly set to a “PERM” validity – OYSC A0026/17 – advising pilots that “Sanaa FIR and Yemeni Airports are safe”. This is clearly not true. More info here.

HDAM/Djibouti Multiple reports in the last few weeks of a high-powered laser light near the airport, centred near Doraleh Port. This is not your average handheld laser, but if local reports are true, it’s the Chinese testing its use as a weapon. There is a mil Notam about this also.

SCZZ/Chile LATAM Airlines are expected to resume normal flight schedules from May 3 after cabin crew ended their 18-day strike.