LIZZ/Italy The ATC strike is still planned to go ahead on Jun 8 at all airports in Italy and all ACC’s, from 11-15Z. Overflights, and intercontinental flights (eg US arrivals) are exempt. Expect disruption on the ground at all airports all day.

MGGT/Guatemala City The airport re-opened on Jun 4, following a major eruption at the nearby Fuego Volcano on Jun 3 which has resulted in the deaths of 70 people so far. Though volcanic activity has been declared over, there is potential for additional eruptions and mudslides.

SBZZ/Brazil No fuel shortages are being reported this week at any of the country’s main airports, following the supply issues last week due to the nationwide trucker strike.

LFZZ/France Unions have called for another French ATC strike in the LFMM/Marseilles sector this coming weekend, Jun 9-10. Awaiting official confirmation by Notam.

ZSZZ/China Tropical storm Ewiniar has made landfall in the Guangdong province in southern China just north of Hainan Island, with gusting winds of up to 50kts. The storm is not expected to have a major impact on Hong Kong, although thunderstorms alerts have been issued.

EGZZ/United Kingdom There are almost no options for London airports to land at during the night this summer. EGMC/Southend is probably the best bet, no restrictions there thus far. More info here.

EGPH/Edinburgh Due to limited parking expected until the end of Aug, the airport is only available for diverts that are emergencies. Don’t use EGPH as an alternate airport on your FPL.

EICK/Cork Night-time runway closures on various different dates throughout June. Check the Notams carefully before planning the airport as a NAT alternate.

EINN/Shannon The runway will be closed from 23-04z each night on Jun 11, 12 & 13. For NAT alternates, consider EGAA/Belfast or EIDW/Dublin instead.

LLZZ/Israel Multiple reports last few days of GPS outages in the Tel Aviv FIR/landing in Tel Aviv. Example from A320 operator: In Nicosia area GPS was lost multiple times. TLV TMA using the RNP-X 30 approach. Contingency plans discussed (request LDA or RNAV-V (no GPS requirement) if GPS would not recover before TMA. Or visual approach if later. Approx. 20nm before LIMKO the GPS functioned normally again, and the decision was made to accept/proceed/continue with the RNP-X 30. At SOSOT, suddenly both GPS 1+2 lost, with many GPS PRIMARY / GPS PRIMARY LOST messages at split second intervals. Decision was made to disconnect AP + FDs immediately as visual with the field and in turn. ATC informed and re-cleared for visual approach. Rest of approach and landing uneventful.

UKDE/Zaporizhia Airport completely closed until Jun 14, due to runway repair.

CZZZ/Canada Canada has now expanded its ADIZ to include all its national territory in the Arctic Archipelago. More info here.

LFPB/Paris-le-Bourget The airport will be closed each night 20-04z, June 11-15, for taxiway repairs.

LBZZ/Bulgaria CPDLC will be out of service across Bulgarian airspace until Aug 30.

VICG/Chandigarh The airport reopened on May 31, after a 20-day closure for expansion and repairs. The expanded runway will be 12,400 feet long with effective take-off length of 10,400 feet.

SVMI/Caracas The US now advises against all night-time travel to/from the airport due to the risk of crime. We recommend to avoid planning tech stops in Venezuela altogether.

LEIB/Ibiza Lack of parking space on the apron expected over the summer months. Until Sep 1, the apron is limited to max 3hr stay for GA aircraft with a wingspan longer than 21 meters.

VABB/Mumbai Work to upgrade the ILS on the airport’s main runway 09/27 has now been completed, and the new system is now in operation.

EGSS/Stansted There are now only 10 night-time slots available for GA/BA per week, and new noise restrictions mean that aircraft rated above QC1 are unlikely to receive slot approval at all during the night period. More info here.

OEZZ/Saudi Arabia Another Houthi missile was intercepted over Saudi Arabia early on Jun 5, this time over the city of Yanbu, which is 150nm north of Jeddah, and 550nm north of the border with Yemen, making this one of the farthest missile strikes launched by the Houthi rebels so far.

RCSS/Taipei Due to runway repairs, Taipei’s second airport will effectively be closed nightly between 2240-0630 local time from Jun 20 to Sep 15.

LGAV/Athens For July and August, PPR will be required for GA/BA aircraft wanting to park for more than 3 hours. But depending on the volume of traffic in the coming days, they may decide to implement this rule sooner. 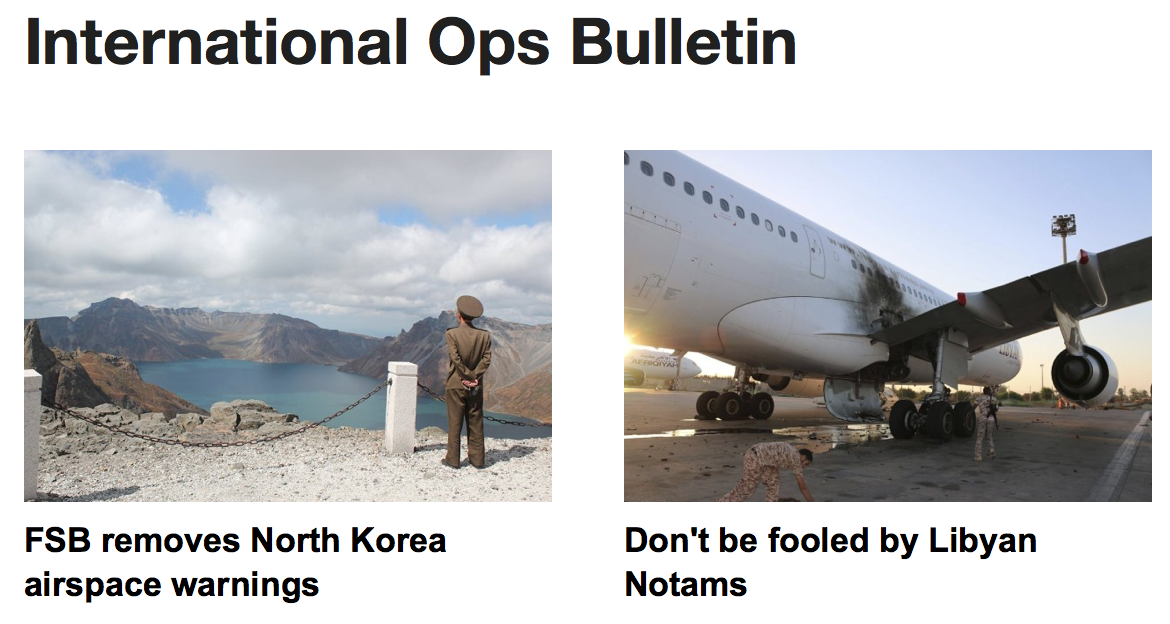