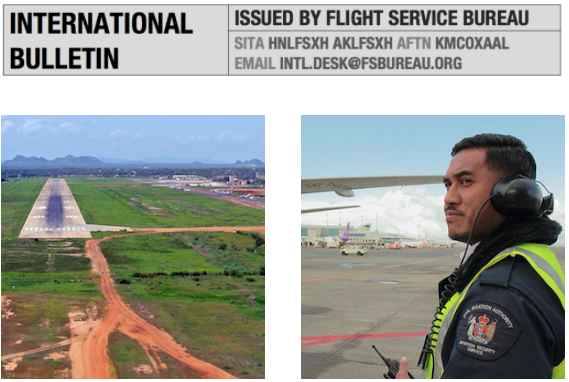 
South Sudan off limits 13JUL The security situation in Juba, and South Sudan, has deteriorated in the last week, with HSSJ/JUB becoming off limits due to fighting. Read the article.

New Zealand airport strike off 13JUL A planned strike by Aviation Security across airports in New Zealand, which would have led to wide scale disruption, has been called off at the last minute. Read the article.

BGBW/Narsarsuaq Current hours are Monday to Saturday 1000-1900Z. If you want to plan a visit outside these hours, or even use BGBW as an alternate, get permission from bgbw@mit.gl in advance. There will be additional costs, especially heavy on a Sunday.

SBZZ/Brazil is the latest country to wield the threat of shooting down aircraft. Last month we reported on the same language from Sudan, in reference to overflight permits. Brazil’s firm stance is in relation to the Olympic Games, and says that unidentified aircraft that violate the protected airspace around facilities of the Olympic Games in Rio de Janeiro. “We are not playing,” said Defence Minister Raul Jungmann. This is more of concern to a lost C172 than commercial flights (unlike Sudan, which is the reverse), but worth being aware of.

EGPZ/Scottish FIR The military are carrying out some GPS jamming trials over the ocean from 12-29JUL. If you’re operating in the region of Benbecula VOR, especially west of it, be aware that your GPS might stop working.

OAKX/Kabul Aircraft in the eastern sections of the Kabul FIR can expect some radio issues, as a comm unit (VSAT at Ghanzi) is out of action. The advice from ATC in Afghanistan is to keep trying the assigned frequency until within range of a different transmitter; in the meantime, a bit of SLOP, IFBP and TCAS should keep you out of trouble. See full article.

MKZZ/Jamaica Significant increase in the number of confirmed cases of Dengue fever in Jamaica during the first half of 2016. Dengue fever is endemic to Latin America and the Caribbean and can occur throughout the year.

ENZZ/Norway FIR Plans are afoot to raise the transition altitude to 18,000ft. It’s an age old question, why does Europe have different TA’s, and the US has just one? Together with surrounding countries, and the Irish FAB, this looks to be changing – but it may take a little while. See Norway AIC 7/16.

YBBB/Brisbane FIR (and Melbourne) will be updating their software on the night of 20JUL, with a hefty 6 hour outage of CPDLC and all the other good stuff.

OAMS/Mazar-E-Sharif Fuel payment is now only accepted in cash.

NZZZ/New Zealand A planned strike by two airport workers’ unions and New Zealand’s Aviation Security Service (Avsec) will now not go ahead. The unions sought increases in compensation, and negotiations on their demands will take place in the coming weeks. Read the article

EYPH/Paluknys is a new location indicator for the airport in Lithuania.

ZBDS/Edros – Ejin Horo, China will open to foreign flights this month. We did battle with AIP China for 30 mins to get further info but lost the fight. If you know more, tell us and we’ll share.

HSZZ/South Sudan The ceasefire announced on 11 July is holding. Juba International Airport (HSSJ/JUB) is open to charter operations; however, commercial flights have yet to resume. U.S. government aircraft evacuated personnel on 12 July; however, a security message issued by the embassy later in the day advised U.S. citizens to continue to shelter in place and not attempt to travel to the airport. Meanwhile, other countries, such as Japan, Uganda, and Germany plan to send military aircraft to evacuate their nationals.

SEZZ/Ecuador A large earthquake (6.4) struck on 10JUL just east of Muisne, on the northwest coast of Ecuador. The quake had a shallow depth and followed 10 minutes after another earthquake that had a magnitude of 5.9. Although strong tremors were reported in Esmeralda and Quito, there were no immediate reports of damage. The Pacific Tsunami Warning Center did not issue a tsunami warning following the quake.

UZZZ/Mt. Klyuchevskoy, Russia continues to produce ash that extends up to 25,000 feet. Movement is towards the east at 10 knots.

PZZZ/Pacific Two hurricanes to monitor: The National Hurricane Center is issuing advisories on Hurricane Celia, located more than 1000 miles west-southwest of the southern tip of the Baja California peninsula, and on Tropical Storm Darby, located several hundred miles west-southwest of Manzanillo, Mexico. Tropical Storm 05E (Darby) is on a strengthening trend…and may reach category 1 hurricane stage over the open ocean in a couple of days. For now both are expected to remain offshore.

DGZZ/Ghana African Union nationals whose countries do not have a visa-free agreement with Ghana are now eligible for a 30-day visa-on-arrival for business and tourism. The visa-on-arrival program will be piloted for three months starting at Kotoka Airport and will be extended to other ports of entry in the future. Travellers can extend their visa upon expiry in Ghana, and business travellers can apply for a longer-term visa at a Ghanaian consular post.

LTBB/Istanbul FIR If you’ve got some time on your hands, have a look at the Greece-Turkey great NOTAM argument of 2016. This is an almost annual performance, the equivalent of a street argument between two kids.. If you’re busy, just skip all of it when they appear on your Pre Flight Briefing for Turkey or Greece (which they will).