Aside from being the oldest operating airport in the New York City area, KTEB/Teterboro is far from quiet.

In the good ol’ pre-Covid days of 2019 it saw over 124,000 aircraft movements – that’s 340 every single day. And even last year in the height of the pandemic, it was well on the way back to those levels.

It is also unique for a few reasons. The first is that it is weight limited – if your ride is heavier than 100,000 pounds (45,000kg-ish), then you can’t land there without a waiver. Which means there is no airline traffic, making it exclusively the realm of GA and business aviation operators.

It is also nestled among some of the busiest airspace in the world. The field itself is only 6nm from downtown Manhattan. Which means traffic in and out of there has to compete with the seemingly constant flows of nearby big hitters KLGA/LaGuardia, KJFK/New York, and especially KEWR/Newark.

This tricky combination creates unique operational challenges for controllers and pilots alike. And now things are going to get even more complicated. Here’s why…

A runway is off to rehab.

Or perhaps more accurately, Runway 06/24 is being rehabilitated. Which is a fancy way of saying it needs to be repaired.

Unfortunately, this is also time consuming. So, a bunch of runway closures have been scheduled at KTEB running all the way into next year at night and on weekends.

During these closures Runway 01/19 will be in use for arrivals and departures which can be hugely disruptive to operations – especially in two scenarios:

When Runway 06 is closed, arriving traffic can expect one of two approaches.

If the weather is good.

You can expect the ILS approach runway 06, circle to land 01 to keep you clear of Newark. But beware, it can be a challenging approach for a few reasons. Code 7700 has published a fantastic briefing that is almost a compulsory read if you’re unfamiliar with ops there.

Some other common sense prevails too – make sure the approach is carefully briefed beforehand. It’s tight, and easy to get unstable so crew co-ordination is going to be important to keep the old SA up.

If the weather is not so good.

You can expect an RNAV-X approach onto Runway 06 – runway closures are weather dependent. The Port Authority of New York and New Jersey have confirmed they will open it back up.

When are we going to see an instrument approach for Runway 01?

Good question, the problem is that Newark gets in the way again. The Teterboro User’s Group are hard at work with the FAA to come up with one, but the process is by nature slow. Within months is the goal, but not quite soon enough to help during these works. 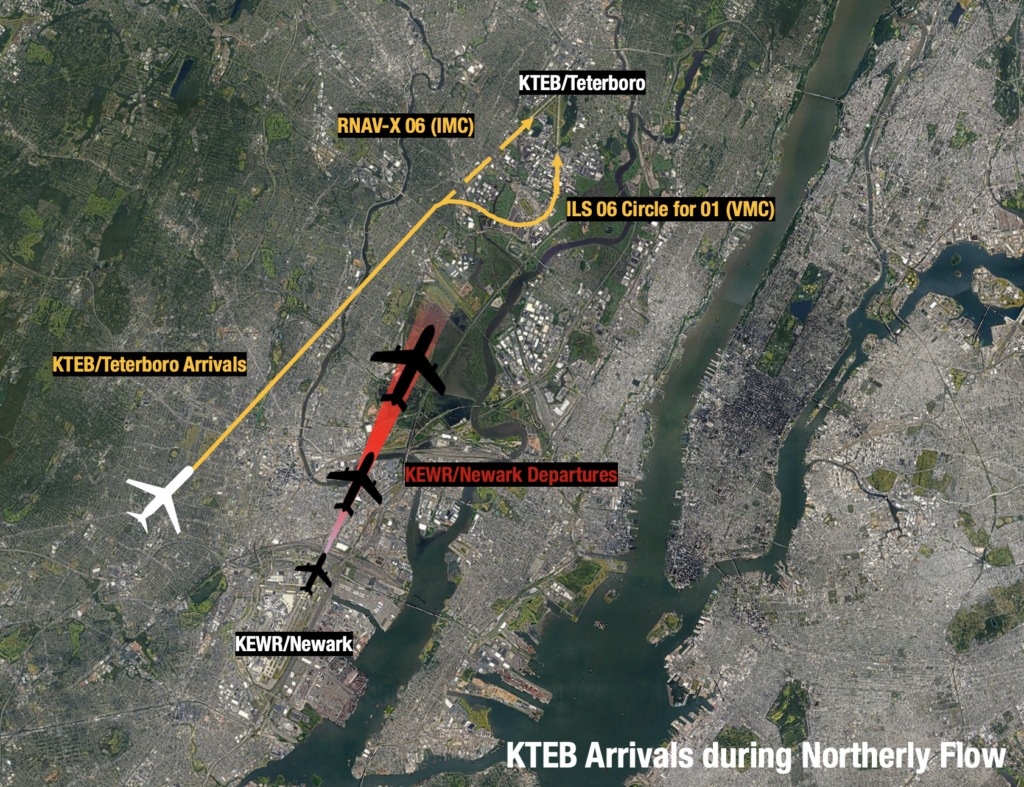 This is when you can expect big delays, as Runway 19 points straight at Newark.

Expect the Teterboro 4 Departure by default. But a head’s up – for every single aircraft that launches out of Teterboro on this SID, NY TRACON needs to find a 10nm gap in arrivals at Newark. And that means a lot of waiting. There may be a better option…

The what? The Dalton Two Departure. It’s unique because it allows aircraft to depart Teterboro visually, before transitioning to your IFR flight plan – and it’s by pilot request only when the weather is better than 3000 – 3.

The Teterboro User’s Group worked with the FAA to get this one off the ground (no pun intended). It is essentially a right-hand turn after departure onto a westerly heading, at or below 1300 feet. You’ll need to keep your speed back too.

The spacing required is effectively halved. Don’t be put off by the phrase expect indefinite delays either. It’s ATC’s way of telling you they don’t know how long it’ll be. But local operators confirm delays are never worse than the standard TEB 4, and more often than not, better.

But before you light the fires, there are a couple of gotchas. It’s going to get busy – the low level-off happens quickly in high performance jets, especially at light weights. So be ready for it. Also, the westerly heading points you (visually) towards rising terrain and there have been reports of EGPWS warnings as a result. 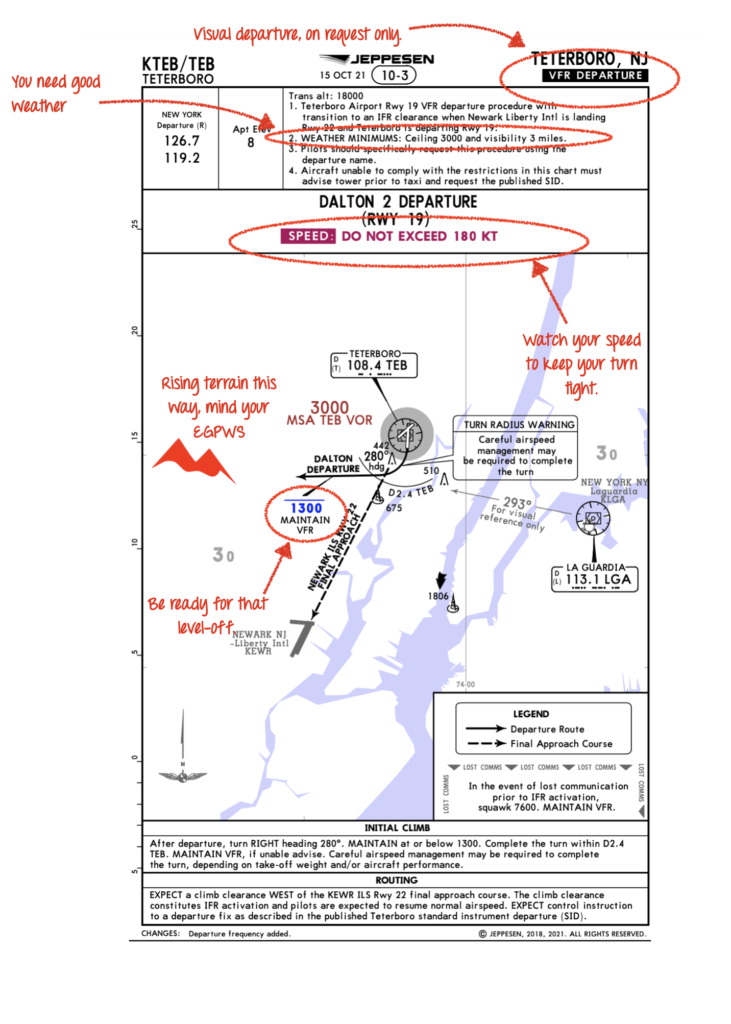 The Dalton 2 can be a valuable time saver, but make sure you brief its threats thoroughly. 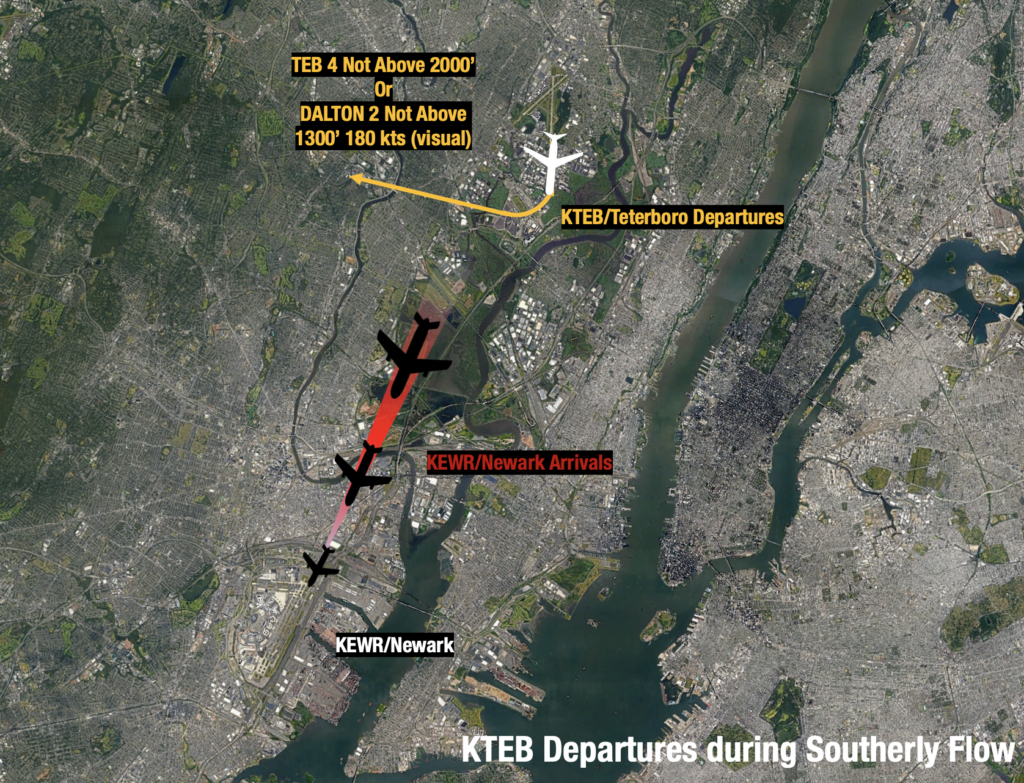 Teterboro isn’t the only option.

If you don’t have the appetite for all of this and are looking for more straight forward options, here are a couple to consider:

KMMU/Morristown About the same distance away with a slightly longer 50-minute drive. It also has two runways with the lengthiest option of 5,998’ (1,828m).

Local operators in New York have told us that even though the drive is a little longer, the overall travel time is often less when you avoid delays in and out of KTEB.

Look out for full airport closures too.

There are also eight complete airport closures scheduled for KTEB coming up, some lasting up to 38 hours:

The exact dates will be confirmed by Notam.

Reach out to the friendly folk at TUG (the Teterboro User’s Group). They’re experts on ops at KTEB, they post weekly construction bulletins on their website and are more than happy to help operators out with advice. Also a special thank you to David Belastock – the President of TUG. This write up would not have been possible without his experience and generous support of OPSGROUP.

We made an Airport Lowdown for KTEB a while back, which you can see here. We had help (since we’ve never flown in there), but if you spot anything to add or change then let us know.

Or you can talk to the OPSGROUP team directly on team@ops.group. We’d love to hear from you.