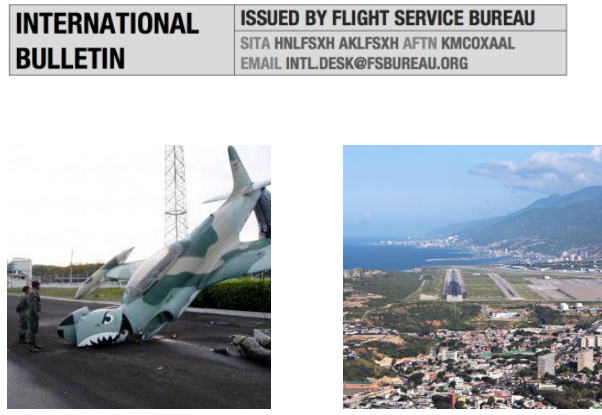 South America – New Timezone 20APR In an unusual move, a new time zone will take effect in South America from the 1st of May. As part of a measure to battle an energy crisis in Venezuela, the entire country will change timezone from UTC -4h30 to UTC-5, to ensure more daylight in the evening when energy consumption peaks. Read full article.

EGLL/London Heathrow An A320 was struck by a drone on approach to LHR on 17APR. This is the first incident of its kind, though there have been many close calls to date.

FMZZ/Madagascar Cyclone Fanatala is currently north of Madagascar, the equivalent of a Category 5 Hurricane. It is expected to miss the island nation and the main airport of FMMI but the close proximity of the cyclone to the island may cause flight disruptions.

BIKF/Keflavik beginning 01MAY, BIKF will be imposing a new Terminal Navigation Charge. This charge is to be applied to all flights arriving at BIKF. The airport authority has issued an Air Navigation Chargedocument to assist in determining the impact of the new fee.

LTZZ/Turkey. We’ve been alerted to a change in Overflight Requirements – aircraft with M- and VP- registrations, and any other countries without a bilateral agreement, require an Overflight Permit. See the new Turkey Lowdown for full information.

TIZZ/U.S. Virgin Islands authorities, assisted by the FBI, began investigating reports of a plot to attack airports on the Virgin Islands, notably the Terrance B. Lettsome International Airport (Beef Island Airport). The U.S. Coast Guard first received information of a terrorist attack plot circulating on social media. The threat focused on Terrance B. Lettsome International Airport but also mentioned airports on St. Croix, St. Thomas and St. John as possible targets. No information is available on what level of credibility authorities attach to these threats.

EBBR/Brussels A recent report from the Brussels Airport CEO has stated that EBBR will be 100% operational by the beginning of June.

EDNY/Friedrichshafen will be hosting the AERO 2016 exhibition from 20APR to 23APR. There is an expected increase in IFR traffic to the airport during the event. Please refer to NOTAM C0933/16 for further details.

SBZZ/Brazil The Canadian government has issued a helpful health notice for crew/passengers planning to travel to Brazil for the upcoming Olympic Games, which has advice on how to contend with the Zika virus.

MGZZ/Guatemala Volcano Santa Maria has had some recent high level ash dispersed into the atmosphere up to FL250. The Washington VAAC provides advisories and forecasts.

ZBAA/Beijing is not available for Non-Emergency diversions or planned as an alternate due to gate/stand shortage daily from 13-23Z daily until 28OCT16.

VIZZ/India The Government of India has introduced the e-TOURIST VISA (eTV) scheme for UK nationals travelling to India. All guests travelling under this scheme must carry a printed copy of the approved eTV for verification at the check-in counter prior to boarding.

HSZZ/South Sudan The UK FCO has issued a travel warning against travel to South Sudan and in particular to Juba due to the return of the First Vice President as “tensions and disturbances” may increase across the country in the coming weeks.

FNZZ/Angola The CDC has upgraded the yellow fever in Luanda Province to an Alert Level 2. The government of Angola requires all travellers older than 9 months to show proof of yellow fever vaccination on arrival. In addition, CDC recommends that all travellers aged 9 months or older be vaccinated against yellow fever.

DNMM/Lagos a new protocol issued by customs and immigration officials is causing congestion in the arrival hall. There are 2 forms being given to passengers only once they enter the arrival processing area. Please ask your handler if these forms can be provided ahead of time.