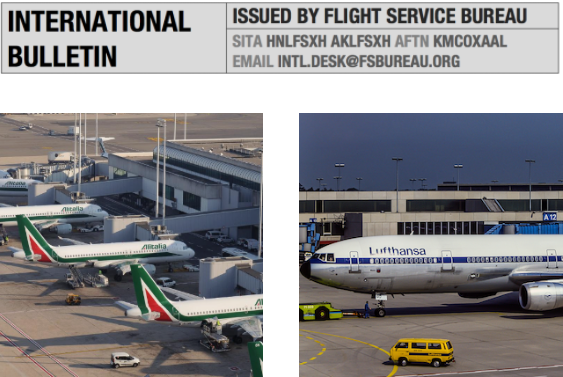 
Rome Airport Closures 27APR Private flights (any non-commercial traffic) will not be allowed to operate to or from LIRA or LIRF on 30APR and 01MAY, as the result of a Papal Restriction. Refer to Italian NOTAMs for details.

KLAX/Los Angeles Due to a runway and taxiway construction project at LAX, arrivals (mostly general aviation) from the north and west can expect to be routed to arrive on the south side of the airport via the LEENA FIVE STAR between 09MAY and 06AUG.

KTPA/Tampa Due to an unforeseen required runway repair, TPA has closed 01R/19L and 10/28 until 09MAY. The airport is operating under single runway ops so you can expect ATC delays until the runway is fixed.

KDEN/Denver has opened a new train line that connects the airport to downtown. Named the ‘A Line’, it will take passengers to downtown in 37 minutes and cost $9 USD each way.

MKJS/Montego Bay increased traffic and possible delays into and out of MBJ 27APR-29APR due to the Airports Council International Convention.

SEZZ/Ecuador As of 23APR, 654 people have been killed, 113 people have been rescued alive, 58 people remain missing, and more than 25,000 remain displaced as a result of the 7.8 magnitude earthquake that struck off the coast of Ecuador on 16APR.

LZBB/Bratislava will be introducing free route airspace in their FIR above FL245 on 28APR. All ATS routes have been withdrawn above this flight level.

MTPP/Port au Prince, Haiti On 24APR, approximately 2,000 protesters marched through Port-au-Prince in opposition of the postponement of the runoff elections. While the protest did not turn violent, it severely disrupted traffic in Port-au-Prince, as protesters set up roadblocks of burning tires in the streets

RJFT/Kumamoto has reopened after closing for several days following the Japanese earthquakes. At this point, the airport can only handle arrivals, due to damage the terminal building sustained, which has effected the airports ability to perform security checks and handle luggage.

RZZZ/Japan The Immigration Bureau will be closed 29APR through 05MAY for Golden Week holiday observance. Foreign nationals should expect processing delays for immigration applications filed before or after this period.

ZZZZ/Worldwide On 25APR the World Health Organization (WHO) warned of a likely increase in the upcoming months in worldwide cases of Zika. Experts believe Europe will be next to experience an increase of Zika virus cases due to the approaching summer.

ZSHC/Xiaoshan The airport authority has requested that all private flights arrive with their specific tow-bar on board to mitigate any departure delays. The expectation is in effect until SEP16.

ZKZZ/North Korea At 0930Z on 23APR the North Korean military launched a submarine-based ballistic missile off the Sea of Japan. The missile flew for approximately 16nm before falling into the sea.

VIAR/Amritsar is currently in the process of upgrading the CAT II ILS to a CAT IIIB ILS which will allow CAT III capable aircraft to land in visibility down to 50 meters. Currently the only other city in India that has a CAT III ILS is Delhi.