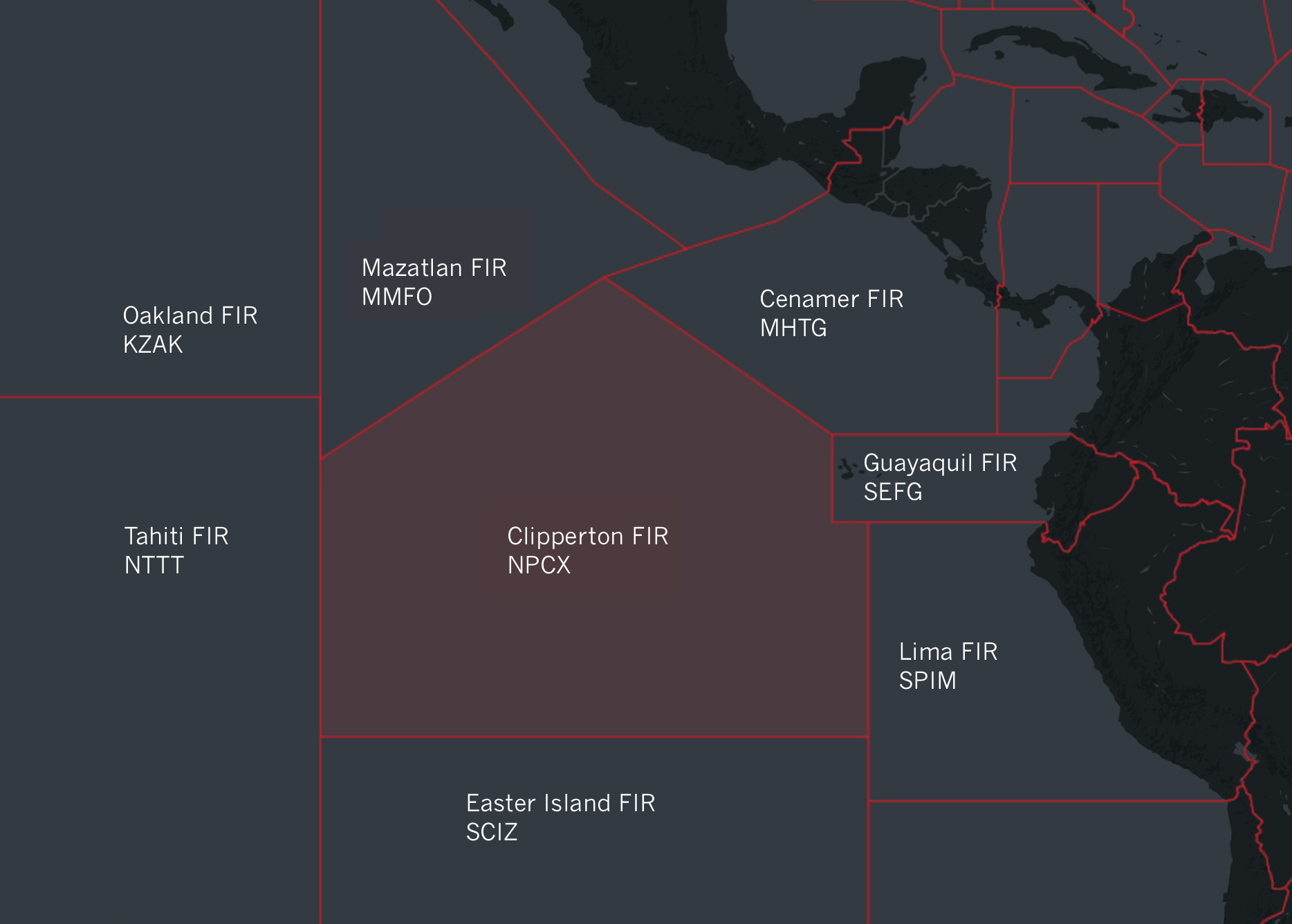 
Clipperton Oceanic starts operations today, and is the world’s newest piece of airspace.

This one is different though – the users are in charge.

FSB and OPSGROUP take official control today of the Clipperton Flight Information Region (FIR) in the South Pacific, a 1.8 million square kilometre chunk of airspace west of the Galapagos Islands and north of Tahiti. The FIR has been unused since 1958, when the Clipperton Oceanic centre and radio service closed.

Announcing the news in an official Press Release, Francois Renard, PM of the Clipperton Government said: “We are a little island but we are proud of our history in Pacific aviation. The years from 1937-1958, when Clipperton Oceanic was a name known to all passing aircraft, are looked back on fondly here. Now, we look forward – to a resumption of traffic on these once busy routes, and we are confident that OPSGROUP is the key to making this happen”.

For the first time, regulations are set by the users. There is no requirement for PBCS, RNP, ADS-B, ADS-C, GNS, GNSS, HLA, MNPS, RLAT, RLON, SLOP, or any of the other exponentially increasing acronyms that operators struggle to keep up with. No LOA’s, no slots, no delays. And no ramp checks. There are no Notams. Although it is large, it’s a simple piece of airspace, and that allows for a simple approach.

Juergen Meyer, a Lufthansa A350 Captain, and a long standing OpsGroup member said: “We’ve seen enough. Ercan (the Cyprus based Turkish ATC centre) doesn’t officially exist, yet you have to call them every time. French Guyana seems to have abandoned their ATC centre. Several African countries have outsourced their entire Permit Department, meaning you have to pay extortionate amounts just to secure a routine overflight. Greece and Turkey continue to hijack the Notam system for a diplomatic war. CASA Australia, like many others, continues to publish absolutely unreadable Notams, endangering safety. Nobody dares to enter the Simferopol FIR. The French ATC service is on strike more often than they are not. Libya lies about the security risks at their airports. Egypt and Kenya refuse to publish safety information because it would harm their tourism.”

Jack Peterson, an Auckland based operator of 2 G550’s, said: “If all these agencies can exist with a poor service, then why not try something different? Clipperton puts the users in charge, and we get to decide whether any of these rules or procedures actually serve us. Now that we have our own airspace, we can make it safe and user-friendly rather than user-hostile. And the South Pacific is the perfect place to start.”

OPSGROUP has also banned Ramp Checks within the region, a practice where pilots are taken hostage by the local Civil Aviation Authority during routine flights, and held accountable for the mistakes of their company, not being released from the ordeal until they submit with a signature.

The Clipperton FIR has a chequered history.

The island is named after a Pirate (John Clipperton). First activated in 1937, Clipperton Oceanic Radio provided a Flight Information and Weather service to trans-Pacific flights for 21 years, until it lost funding from a French-British-American government coalition in 1958.

In 1967, the Soviet Union attempted to takeover the airspace, offering to build several Surveillance Radars on the island. That was seen by the United Nations as a cover story, with their interest being more likely centred on having additional monitoring territory proximate to the US.

Since then, the Flight Information Region has remained dormant, appearing in most Flight Planning systems as “XX04”. Until the agreement with FSB, no service of any kind was provided. 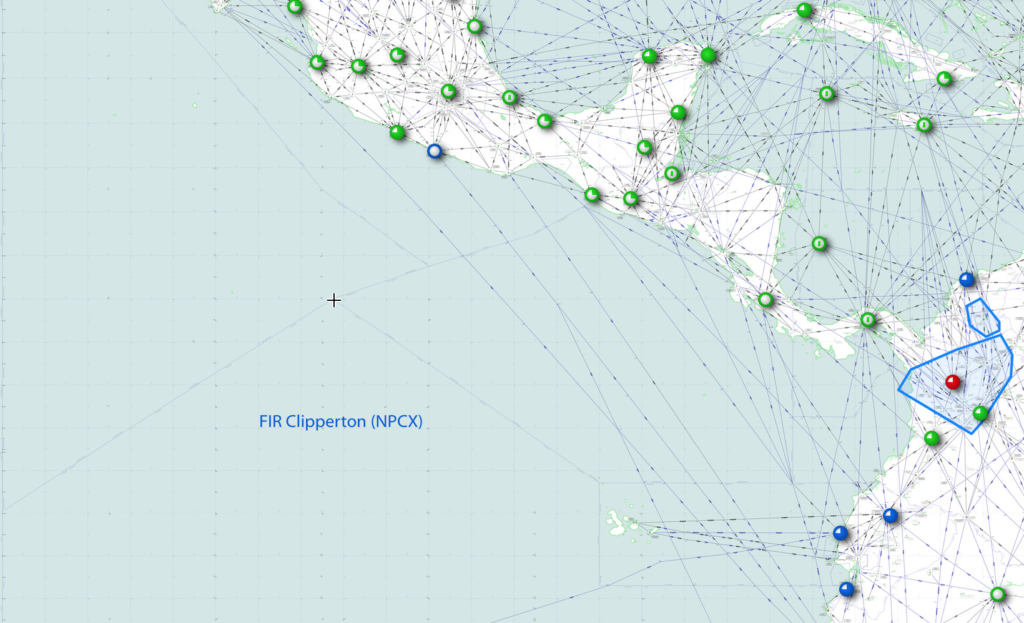 The Clipperton FIR, still marked on the Skyvector chart as “XX04” (Click to expand)

The move has been seen by some observers as similar to the delegation of control of Kosovo airspace to Hungary in 2013, under a 5-year agreement that will likely be extended. Reinhard Kettu, newly appointed Oceanic Director, FSB, commented: “It’s not really the same thing. The Kosovo thing was just a delegation of Air Traffic Control, and at that, just for civil aircraft. Here, in Clipperton, FSB is taking full control of the aviation system. That will allow us to introduce an across-the-board user-first system.

On the Notam issue, OPSGROUP founder Mark Zee commented: “We’ve made things really simple here. Critical Notams, for the most part, tell us of a binary Yes/No for availability. Runway closed, ILS unavailable, Frequency u/s. It’s basically an On/Off switch, and the existing system handles that pretty well. When it comes to everything else, they fail, badly. So much rubbish about unlit towers, cranes, birds, and the rest. That makes up the noise. So, we’ve banned them in this new airspace, while we work on a better system. We will notify operators through the DCA of any withdrawn essential service or facility, for example if our HF is broken. Nothing else.”

Operationally, there are two new airways, UN351 and UN477, with 8 associated waypoints. HF is provided on the South Pacific MWARA Network, on the same frequencies as Auckland, Brisbane, Nadi, and Tahiti – 5643 and 8867 will be the primary ones.

Flight plans should be addressed to NPCXZQZX and NPCXZOZX. Although only HF is required to enter the airspace, CPDLC is provided and the AFN logon is NPCX. To begin, only a Flight Information Service is provided; no alerting, SAR, or Air Traffic Control service is part of the agreement. The rest is detailed in Clipperton AIC 03/18.

FSB and the Clipperton Government have also partnered with Thales and the KPA Military Construction Unit in a US$27 million agreement to build an entirely new Oceanic Control Centre on the Island, to be completed by 2021. “Until then, we will rely on HF and position reporting, but from 2021 we will be able to use space-based ADS-B”, said Mr. Kettu.

Clipperton Oceanic welcomes all. If you’re passing, say hello on HF. And if you’re planning to enter the airspace, make sure to read AIC03/18.