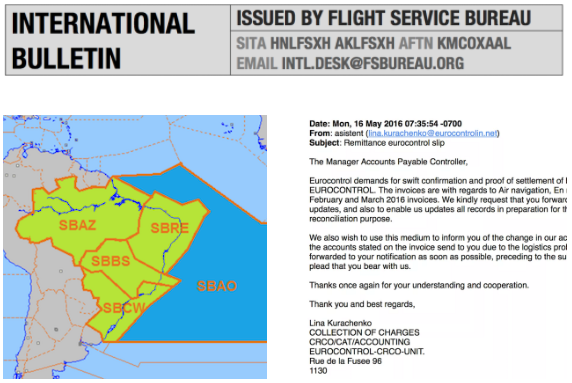 
Brazil Airspace changes for Olympics 18MAY A number of airspace changes, and specific procedures for aircrew and ATC, have been created for Brazil in advance of the 2016 Olympic Games, which start on 05AUG. Read the article.

Increase in Fake Nav Charges 18MAY We’ve seen an increasing variety of bogus emails, that at first glance look like they are from Eurocontrol – but aren’t. It’s a concern: instead of sending your Nav Fees payment to Eurocontrol, you’ve actually sent it to a suburb of Lagos. Read the article.

LFZZ/France A French national call to strike is planned for 19MAY. Several public service unions have echoed this call, including USAC-CGT for the DGAC. Please check the NOP Portal for the latest advisories.

BIKF/Keflavik Closures here and in BIRD/Reykjavik Oceanic airspace continue due to ATC Industrial action. Plan all flights to or within Icelandic airspace with caution. Iceland strike continues … Read Full Article.

UIBB/Bratsk has multiple new restrictions of ATC hours, RFF categories, and availability as alternate. Check A1923.

PLCH/Christmas Island will not supply JetA1 to non-scheduled flights, shortage until 26MAY. Landing permits are now required at least three days prior, and can be obtained via email at cal02@mcttd.gov.ki.

EGLL/London Heathrow will have an emergency exercise on 21MAY. If you see smoke or fire, it’s most likely from there.

N90/New York Airports The FAA has withdrawn its proposed slot program which was extremely restrictive to non-scheduled operators. The FAA is withdrawing the NPRM to allow for further evaluation of these changes.

KZZZ/United States the FAA has updated it’s list of Critical DME’s. When these critical DME’s are not available, it results in navigation service which is not sufficient for DME/DME/IRU operations along all or portions of a specific route or procedure. This is mainly an issue for Non-GPS equipped aircraft.

CYUL/Montreal has added a new International wing to the terminal as of 12MAY. The 65,620-square-foot expansion includes 8,611 square feet of additional retail space and six new boarding gates.

SOOO/Cayenne FIR issued NOTAM A0141/16 advising that the due to the SOCA CPDLC system trail, datalink connection may be lost. If unable to communicate by CPDLC then they advise to contact SOOO or SOCA VIA normal HF frequencies until 24JUN.

EZZZ/Europe an annual large scale military exercise called “NATO Tiger Meet 2016” will be held from 16MAY to 27MAY in Spain. NOTAMs LE D1109/16 and D1272/16 have been issued along with a map detailing the area.

LKPR/Prague officials stated that they are working to assess the security at LKPR as they begin to implement the government’s security recommendations. The measures, including face recognition technology, should be fully introduced within 12 to 18 months. Security has increased in response to the attacks in Brussels. Heavily armed soldiers continue to patrol LKPR.

NZZC/Christchurch FIR has issued NOTAM B2740/16 advising of recent activity for Volcano Mount Ruapehu. No current eruption but concern for increased likelihood of eruption exists.

FHSH/St. Helena has received its certification to begin commercial flight operations. An 1850 meter runway, a 3500 sq m airport terminal and other associated infrastructure, such as access roads, bulk fuel installations, water supplies and aerodrome ground lighting have been installed and are ready for operational use. However – concerns remain about windshear which is currently delaying acceptance of traffic.

HKZZ/Kenya The U.S filed an advisory with IATA stating that Kenyan airspace is unsafe due to a possibility of extremist or militant activity within Kenyan airspace as Al Shabaab has demonstrated the capability and intent to conduct terrorist attacks in Kenya targeting, among others, US/Western interests including aviation interests.

EGPX/Scottish Scottish Control is changing to a new ATC system this week: expect airspace restrictions. ATC advises a fundamental level of change in the method of operation within Scottish Upper Airspace will result. There is no change to the Oceanic Operation, and Domestic CPDLC will be available at all times from 17MAY.

CYMM/Fort McMurray, Canada remains closed due to Forest Fires; only emergency and evacuation flights are allowed.

EHZZ/Amsterdam FIR The Netherlands has revised procedures for obtaining Special Permission for overflying or landing aircraft on delivery, ferry flights, or other circumstances where a normal Certificate of Airworthiness is not in place. Read the article. Questions should be directed to our ferry team at service@fsbureau.org.

View the full International Bulletin 18MAY2016