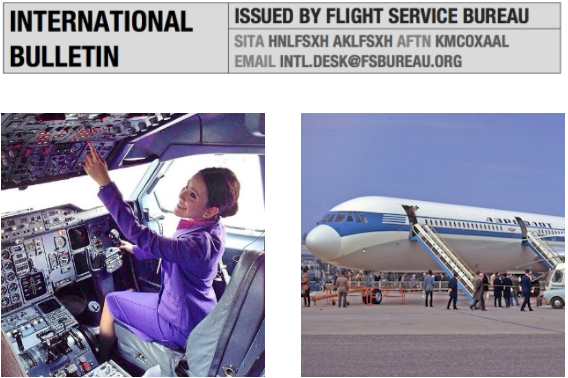 
EASA: New Cockpit Rules 10AUG EASA has published a new SIB with guidance for operators on, well, how best to arrange the swap of pilot-taking-a-pee and flight-attendant-now-up-front … Read the article

UUZZ/The Moscow Area will get busy between 26AUG and 04SEP (we’re not entirely sure why), but … The Main Air Traffic Management Centre (MATMC) has issued notice that there will be increased regulation for flights to UUWW, UUDD, and UUEE. Permission to depart will expire 30 mins after planned off blocks time, after which the Operator (that’s you) must call MATMC for a completely new permit.

MWCR/Cayman recorded its first local transmission of the Zika virus on 08AUG. Several other people on the Cayman Islands have reported symptoms of the virus; however, authorities stated that in these cases the patients contracted Zika during travel abroad.

MKJK/Kingston, Jamaica is carrying out work on its Comms lines until the end of the week, and is expecting to lose some Flight Plans. The outage is 0415-1100Z daily. If you are operating to Jamaica, or through the FIR, it’s worth sending your FPL early, and not during that time. Maybe send it a few times to be sure, should minimise delays due to missing FPL’s.

VIZZ/India Independence Day on 15AUG. Multiple restrictions. No overflights within 150nm of Delhi. VIDP/Delhi will not allow non-scheduled flights 0030-0430Z, and 1030-1330Z. Check with your handler for specific restrictions on 15AUG.

LIRA/Rome Ciampino will be completely closed from 14-29OCT for runway maintenance and upgrades. According to CIA, maintenance work will be carried out on a 24/7 basis on parts of runway 15/33, at various junctions and taxiways.

EVVA/Ventspils is closed for the week from today, due to repairs to the main runway. One of the three main airports in Latvia, it reopens on 15AUG.

GUCY/Gbessia, Guinea Opposition leaders have announced the postponement of opposition demonstrations planned for 10-16AUG. Marchers will reportedly demonstrate on the Autoroute Fidèle Castro, between Aéroport International de Gbéssia (GUCY/CKY) and the Palais du Peuple. The demonstration was originally slated to occur on 4 August but was later postponed until 10 August.

LWKS/Skopje Flooding on 6-7AUG2016 in Skopje and neighbouring areas has resulted in over 20 deaths. Some roads, including part of the Skopje ring-road, are closed. Alternative routes are available, but traffic may be slow moving. You should travel with extreme care.

LTZZ/Turkey Per new dictat from the DGAC in Turkey, all Ambulance flights entering Turkish airspace are to report “ACTIVE AMBULANCE FLIGHT” on first contact with Turkish ATC.

EDDV/Hannover has special runway configurations on 14AUG due to (yet another) bomb from WW2 being removed. Between 1100-1400Z all approaches to 27L/09R are suspended.

VVZZ/Hanoi ACC reports that a lot of flights operating through the Hanoi ACC area of responsibility have not been submitting flight plan messages to VVHNZRZX or VVHNZQZX. In order to avoid missing / delay of FPL messages, copy these AFTN addresses when submitting your FPL’s.

BGSF/Kangerlussuaq Daily Closures between 09AUG and 30AUG for runway work. Double check NOTAMR A0295/16 for complete list of timings. Only Medivac, Search and Rescue and PPR confirmed operations allowed.

KTEB/Teterboro Landing Fees here are to increase by about 25% on September 1st. Comments regarding the fee changes can be submitted to The Port Authority of New York and New Jersey, and must be received by 10AUG2016.

Measles Myanmar/Taiwan On August 6th health officials confirmed a measles outbreak in the Sagaing region, a mountainous area located in northern Myanmar, bordering eastern India. We have also received report from Taiwanese health officials confirming a link between two cases of measles and Taipei’s Songshan International Airport (RCSS/TSA). The two cases, which were first detected on 15JUL, involved an airline ground crew worker and a passenger who traveled to the airport.

SECU/Cuenca, Ecuador Operations at Cuenca airport will be suspended from mid-August 2016 for 3 weeks to 1 month due to the need for additional runway works.

OMDB/United Arab Emirates On 04AUG both runways at Dubai International Airport (OMDB/DXB) resumed full operations following the 03AUG 777 accident. Expect delays and some cancellations as the airport is still struggling to catch up.

UTZZ/Turkmenistan and UAZZ/Kazakhstan On 04AUG Turkmenistan temporarily closed its border with Kazakhstan, citing security concerns. Officials stated that the closure will last for five days. Turkmenistan instituted a similar border closing on 20JUL. Authorities did not release details on the purported security concerns that prompted 04AUG closure.

UZZZ/Russia 03AUG Polish officials stated that they did not have a specific date to reopen visa-free border traffic between Poland and the Russian enclave of Kaliningrad. Security concerns associated with the NATO Summit and Roman Catholic Church’s World Youth Day led officials to temporarily restart border checks at Poland’s borders. Residents of border areas, however, will be able to travel across the border for cultural, social or family reasons.