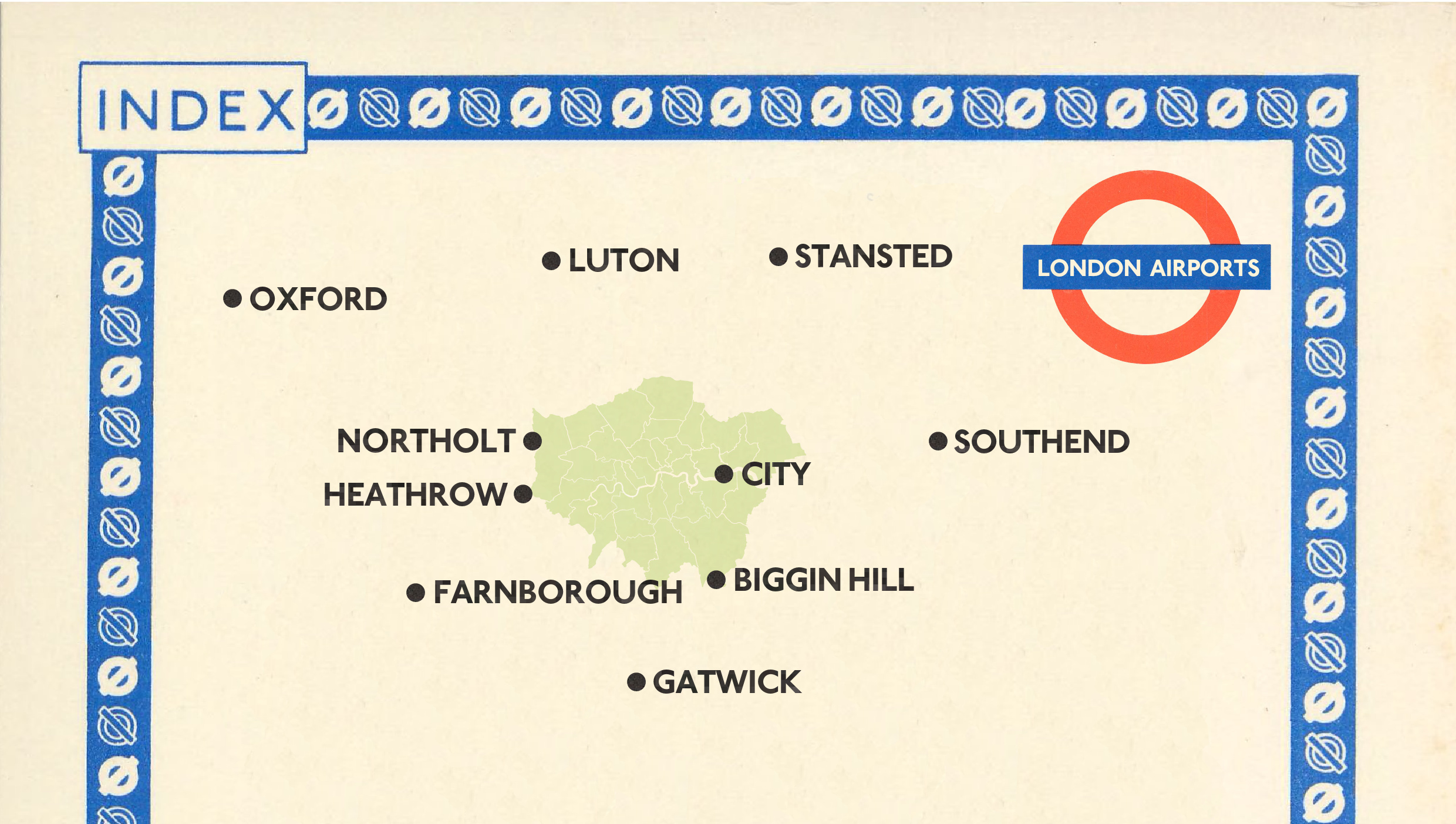 
Here’s some basic info we put together on the London Airport options, made with help from the London Underground tube map publishers, circa 1962. 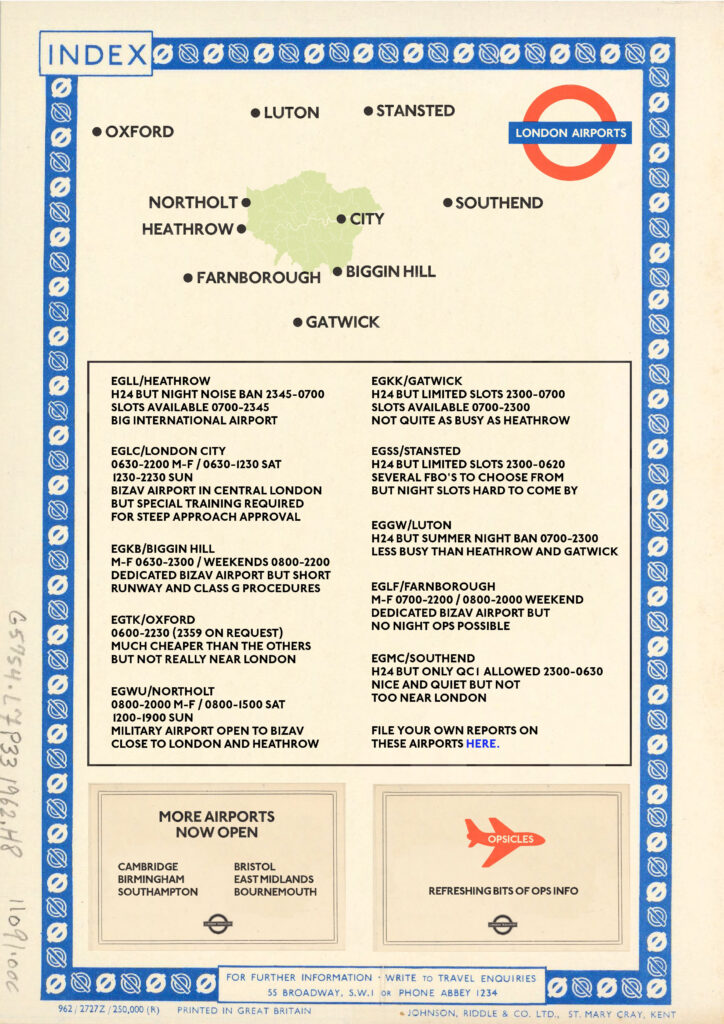 How many airports are there around London?

Then you have EGMC/Southend which is also quite big but a bit less big really, it mainly just serves European routes really. Same for EGGW/Luton. FYI – both of these are officially ‘London’ as well.

Then you have smaller or predominantly business aviation airports – EGLC/London City, EGLF/Farnborough (not a London, but closeish), EGTK/Oxford Kidlington (this is a London), EGKB/Biggin Hill (really near London but not called London) and EGWU/Northolt (8nm from Heathrow and actually a military base).

Back in 2015, the UK handled something like 2 million flights a year and 1.2 million of them were in and out of the 5 main London airports. In fact, here’s a cool video of 24 hours in London (also from 2015 so probably wildly inaccurate at this point, but has some nice neon colours.)

Right, so, it’s busy. What are some things you need to know.

It only has 3 FIRs – London, Scottish and Shanwick, although these are split in UIRs as well.

All the airspace in the UK is split into 7 types classes – A to G. Here is a picture: 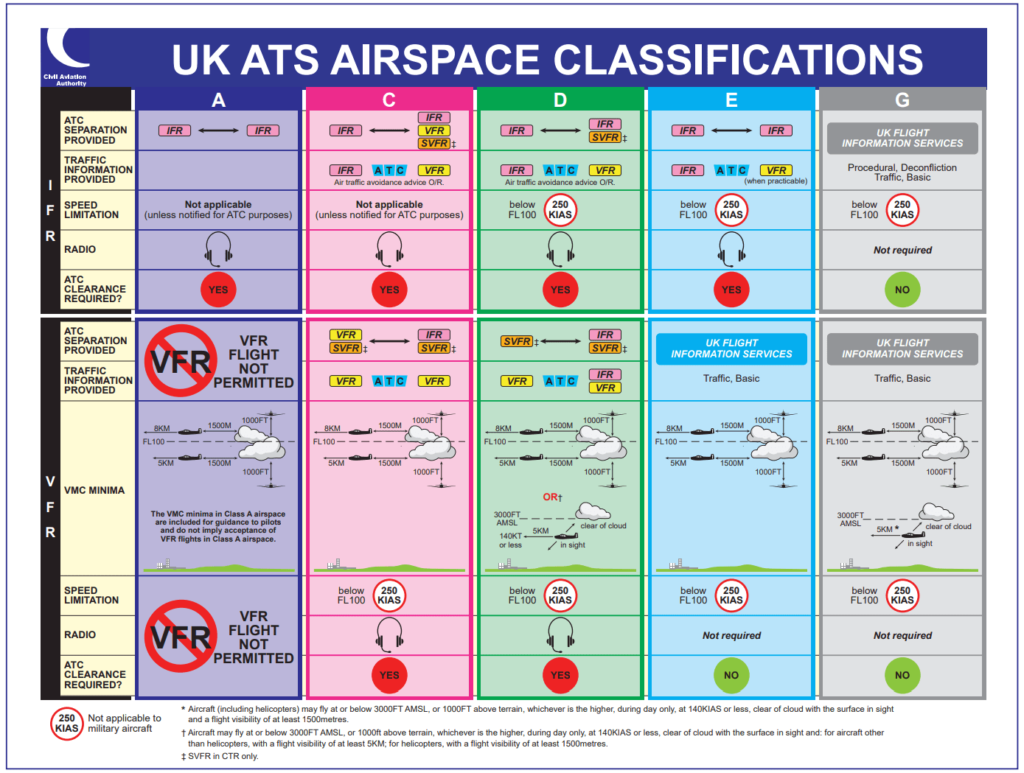 I will point out, in case you miss it, that Class G is uncontrolled.

If you’re in Class G (and some class E if you’re VFR) then you get Flight Information Services. These work like this: 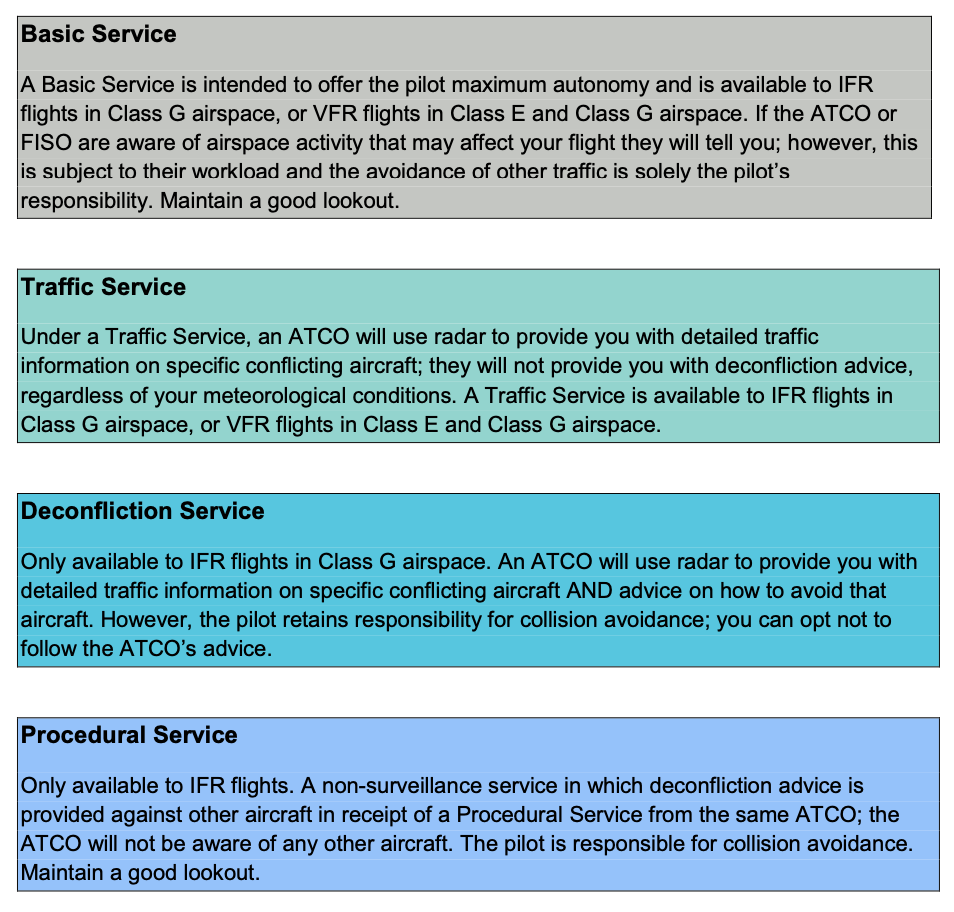 When will you ever be in Class G?

Remember this started as a post about London, sort of? Well, now it is a post about Biggin Hill specifically, because that’s where you – a BizAv aircraft maybe routing over from the US on some nice business trip – might find yourself in Class G airspace.

First, let’s talk Air Traffic Zones (ATZ). If the longest runway is longer than 1850m, then these zones are generally 2000’ high and 2.5nm around the aerodrome – if shorter than that you generally have a 2nm ring.

To go in or out of an ATZ you need to either:

So, Biggin Hill has an ATZ and it’s a funny sized one and it’s right in Class G airspace, and if you fly there you probably want to know about the procedures to go in before you.

We were told this by a very helpful Opsgroup member who had just been there.

It is in class G, has an ATZ, and a tower. The tower give you all the permissions and clearances you need.

Right above Biggin Hill you’re straight up into Class A (2500’). Your instrument approach starts below Class A and is outside the ATZ… so many non radio carrying, non transponder transmitting aircraft could be wafting about all around you. You might get one of those service I mentioned above, but you might not, and you will always have to make sure you don’t fly into stuff. So watch out.

Also because of its airspace, you can probably expect some extra track miles as you head in and out from the west. Arriving –  count on an extra 15 minutes, departing – be prepared for an extra 10 minutes or so.

They also only really land onto runway 21, and if you depart 21 then it’s an EARLY right hand turn for noise abatement.

Here’s an Airport Lowdown on all of this. 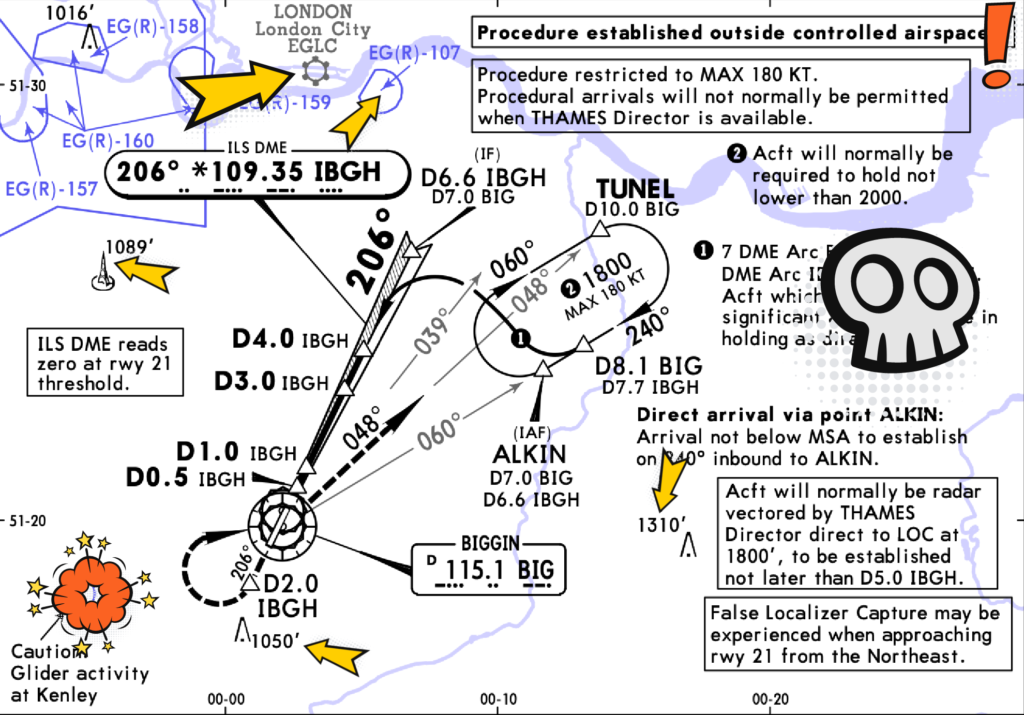 Finally, some other bits on other London airports.

1. Don’t go to London City unless you have been trained (it needs prior training) and your aircraft is certified for steep approaches or its going to get quite embarrassing fairly quickly. If you are going to London City then take a look at the platform and missed approach altitudes because they’re low. Why? Because it is directly under the flight paths for Heathrow and Gatwick.

2. Don’t head to Heathrow without a bit of fuel for holding. You usually hold for Heathrow.

3. Don’t fly level for too long if you’re heading to Heathrow. They have quite strict NABT arrival procedures and you might get fined (and will definitely get shamed!) if you don’t try and do a CDA.

4. Don’t plan on using many of them at night. Really, Southend and Stansted are your only options at night – everywhere else is either closed or has noise curfews in place. Here’s something we said on that.

5. If you’re not from the UK you’re more than likely going to need to register for a TCO before December 2022 if you want to operate any kind of commercial flight into the UK. It looks like a hideous process and we don’t know much about it so if you have questions, email these folk – TCO@caa.co.uk

6. London is awesome. If you want some recommendations on top spots to visit then ask.