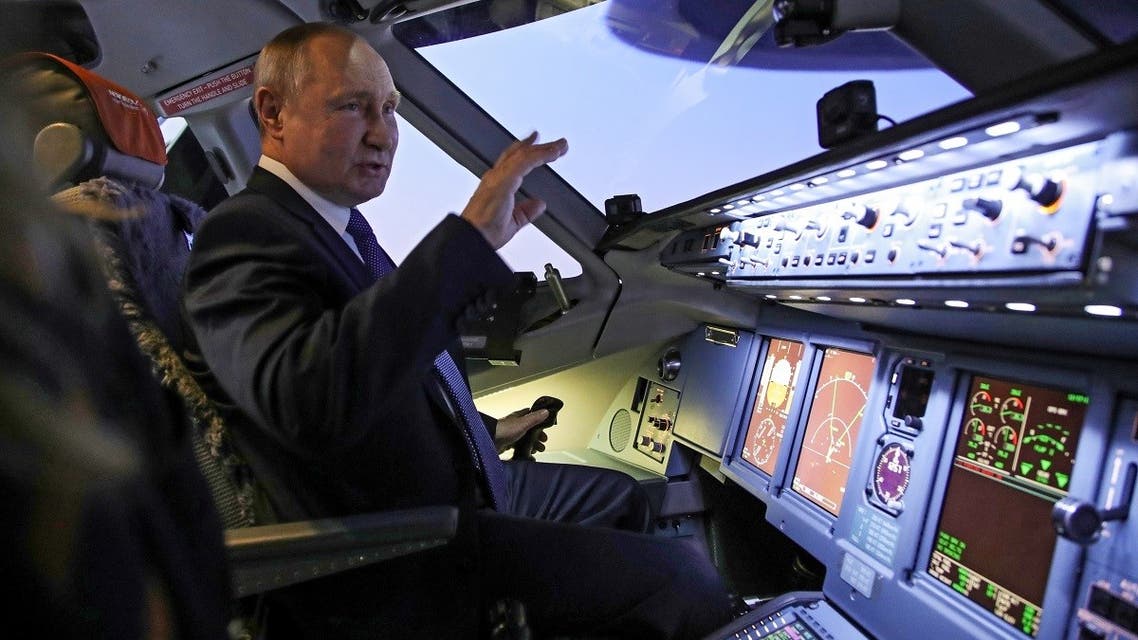 
As the conflict in Ukraine continues, the world has been responding with sanctions against Russia. This includes the US, Canada, the UK and EU.

The problem is that these sanctions are having far-reaching impacts on aviation – especially for charter operators who may not even be aware that they are breaking the rules. And it’s important to stay on the right side of the law, as the penalties can be severe – even if the lines are blurry.

Here is a rundown of what we know for US operators, and things to be aware of.

First up, what actually is a sanction?

Simply put, commercial and financial penalties that are applied by one or more countries against another state or group.

They are a tool that falls short of military force for punishing or deterring some form of action. In this case – Russia’s ongoing military offensive in Ukraine. Sanctions mean that our ways of doing business, or interacting financially, are restricted by law – including the payment for, and delivery of, services for those restricted by the sanction. This is where things start to become complicated for aviation. Perhaps more than you may realise.

US operators can find that information in KFDC Notam 2/2415 below: 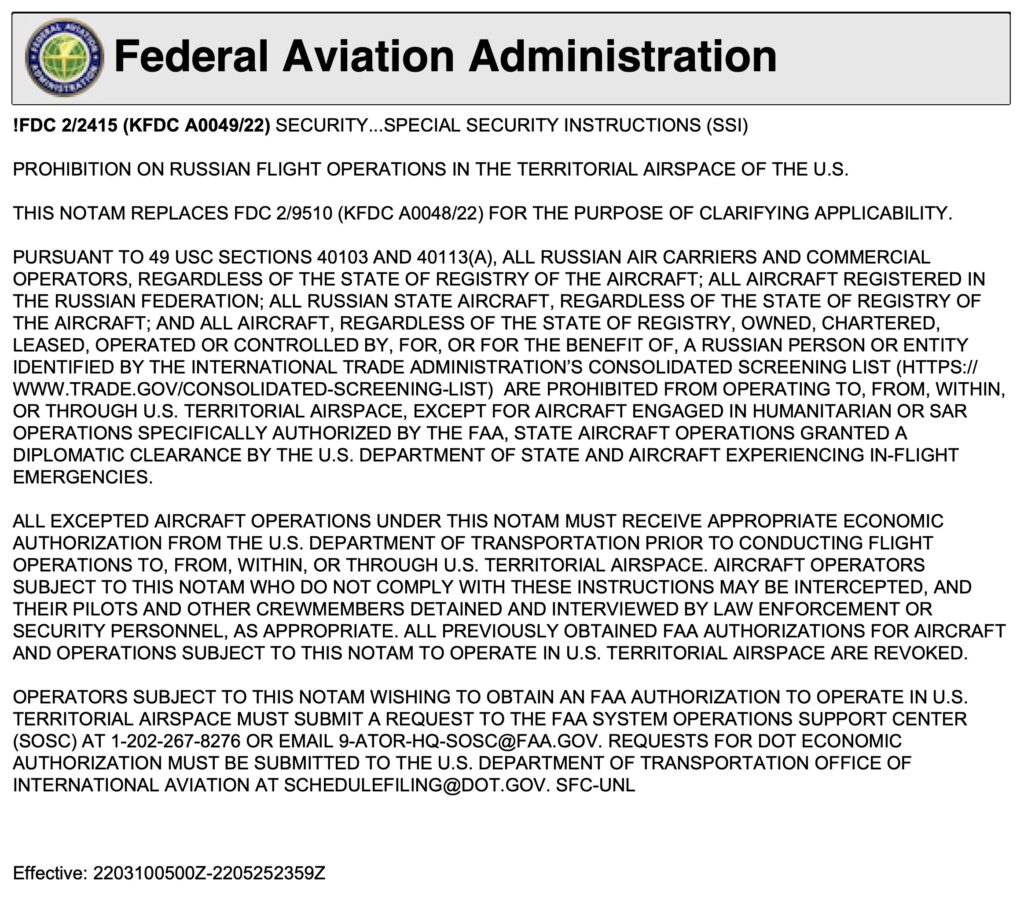 So, regardless of where an aircraft is registered – if it is owned, chartered, leased, operated or controlled by or for the benefit of a Russian person or entity on a specific list (www.trade.gov/consolidated-screening-list), it can cannot be operated in US airspace. This includes overflights. Exemptions are available but only with special diplomatic approval.

The issue is that the italicised words above are open to interpretation which can lead commercial operators, especially charter providers up the garden path. And as the Notam eludes to, rule breakers can be detained or even face prison time. It may be tempting to try and sneak under the radar but be careful. The US Government has established a task force known as ‘KleptoCapture’  to actively enforce the sanctions. They have the ability to arrest, prosecute and even seize the assets of anyone breaking the rules.

Let’s take a closer look at what you need to be careful of.

Who owns the bird?

Fractional ownership of private jets can be complicated. There can be numerous owners of a single tail number. It may have a N-Reg, but that doesn’t mean part of that tail isn’t owned by Russian interests. Even if it’s only a small part. Which means just flying it will put you on the wrong side of the law. The reality right now is that ownership share may need to be re-allocated.

Things can become more complicated  too – it may not be an individual that owns a share, but a company. And what if that company is, or has since been purchased, by those with interests in Russia? This can also be buried deep in the legalities of business. 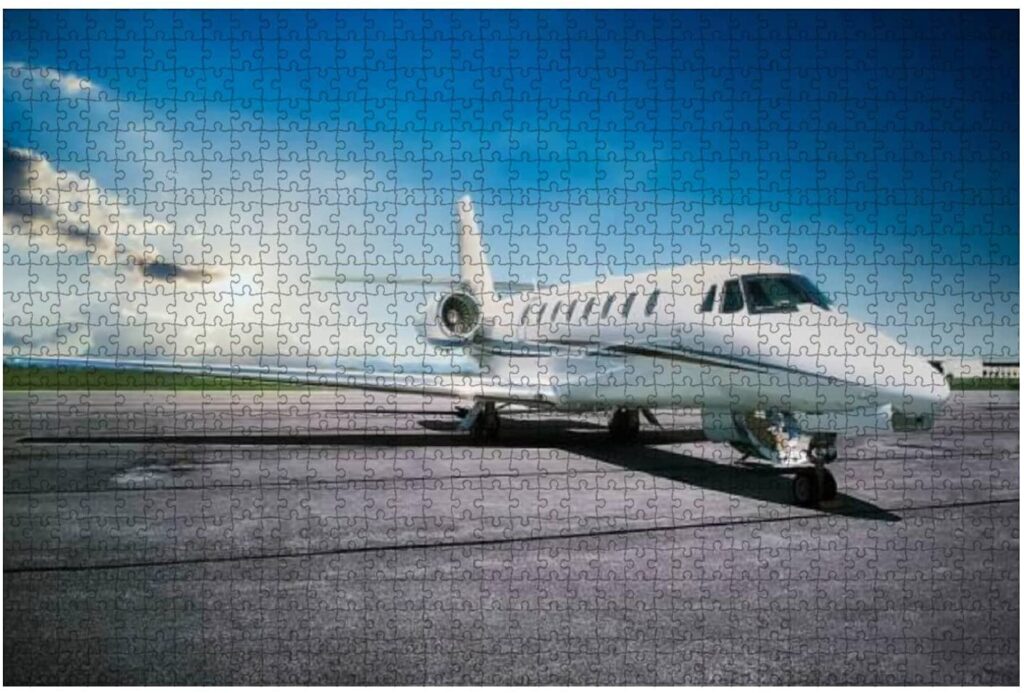 Be careful with fractional ownership arrangements. Even if only one piece breaches the sanction, it can’t fly in US airspace.

I need a ride – the charter conundrum.

As they stand, current sanctions do allow you to carry Russian passengers. But, they can’t be the ones who have specifically chartered your aircraft. Or in other words, Russian nationals and companies can’t be the ones to thumb the ride – but they can take a seat if someone else is picking up the tab.

There is also the issue of dual citizenship, or dual passports. Where does the duty of care for operators lie, and how would they know? It is a question to which we are still looking for answers.

Purchasing an aircraft is also currently problematic – particularly if it is currently owned by Russian interests. That is also no-bueno. If you’re in the market for a new ride, make sure you understand exactly who you are buying it from – in terms of legal and beneficial owners, along with the broker you are using and how you plan on financing and insuring your purchase.

Stuck on the ground.

The effect of sanctions and airspace restrictions means that moving expensive aviation assets out of Russia right now is a risk. Put it this way – there are currently somewhere in the vicinity of five hundred leased jets effectively grounded there. That’s literally billions of dollars’ worth of aviation assets waiting to be recovered, with no obvious solution in sight.

And even if you get airborne, are you allowed to be operating in their airspace? Russia has been reciprocating western airspace bans with bans of their own – check out the UUUU Notams for the lengthy list of those.

Then there is the issue of what happens if your airplane breaks. You will struggle to secure the supply of parts, services and other support for aviation assets in Russia as you would effectively be in breach of sanctions. Be aware that even if you can operate an aircraft into Russia right now, you may find yourself stuck when it is time to leave again.

Sanctions are also having an impact on operating costs around the world. Restrictions on the importation of Russian oil has seen oil prices, and the cost of jet fuel, sky rocket in recent weeks. It has increased by thirty percent in the last week alone, and has effectively doubled compared to this time last year. That’s rampant inflation.

Add to that that the majority of the world’s traffic are having to bypass over six million square miles of airspace to and from Western Europe and you can quickly begin to get your head around the combined costs of these issues to our industry.

And in Russia there is also an emerging problem of availability. Earlier this week we reported to OPSGROUP members that at least one major carrier had cancelled flights to Moscow due to being unable to uplift fuel. It is important to gauge availability ahead of time. 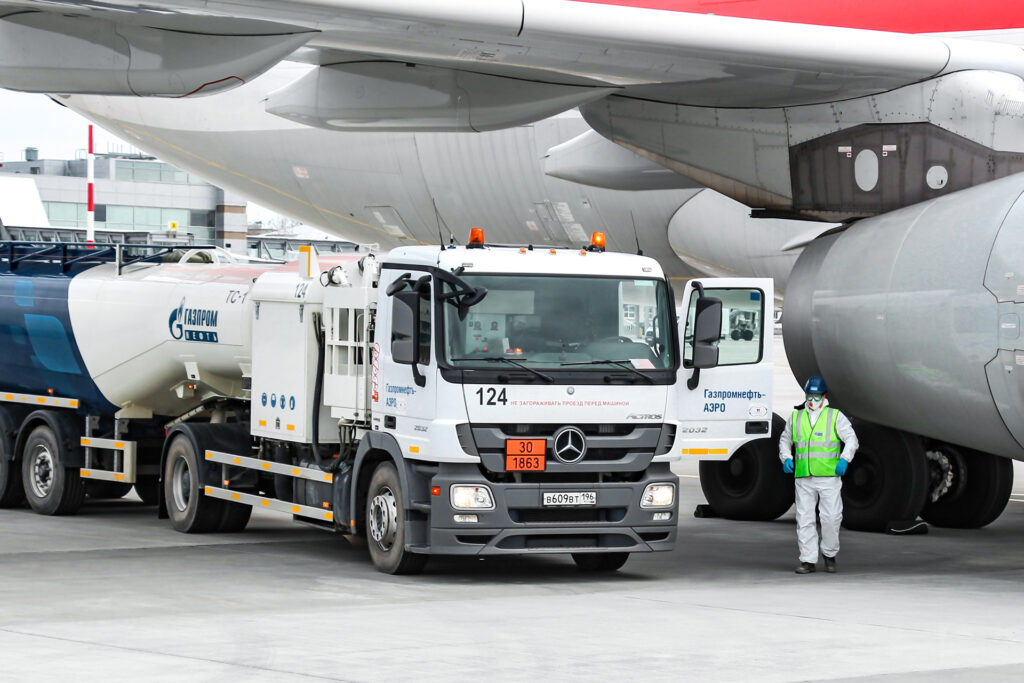 Jet fuel shortages have been reported at some Russian airports.

So you have a pressing reason to break the rules of the sanctions? You may still be able to fly, but it’s vital you get diplomatic approval first – even if only operating domestically in US airspace. There are two things you’ll need. First is an economic approval from the US Department of Transport Office via schedulefiling@dot.gov. You’ll also need to submit a request to the FAA System Operations Support Centre (SOSC). You can reach them on 1-202-267-8276 or via the email 9-ator-hq-sosc@faa.gov.

Permission is most likely to be granted to flights engaged in humanitarian, SAR or other essential work.

Where else to look for help.

If in doubt, it is better to seek clarification on the rules before you fly. This may mean seeking legal advice. The OPSGROUP team may also be able to help – you can reach us on team@ops.group and we’ll do our best to give you a hand.