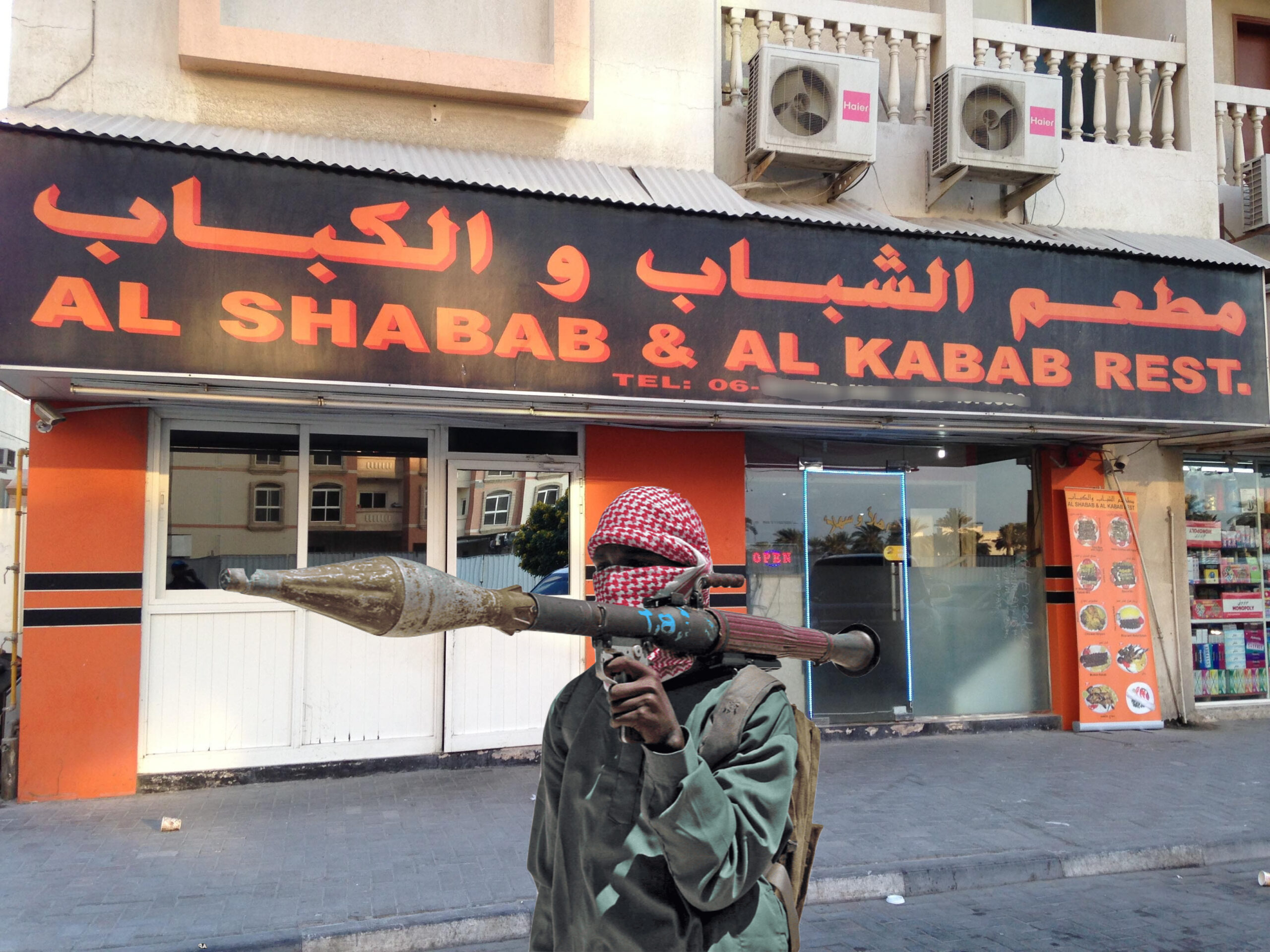 
Al-Shabab poses a significant threat to aviation in Somalia, but the threat extends beyond the nation’s borders. This briefing will take a closer look at the background and nature of the threat, and will provide a brief overview of Somalia’s aviation infrastructure to help enable operators and pilots to carry out a full risk assessment.

The root of it.

Somalia sits on the Horn of Africa, bordered by Ethiopia to the west, Djibouti to the Northwest, Kenya to the southwest and the India Ocean to the east. The capital is Mogadishu and the primary international airport is HCMM/Aden Adde International.

It is an extremely volatile region of the world. It is also a pretty important airspace because it is one of the primary routes for aircraft routing from the Middle East and Asia into Africa. 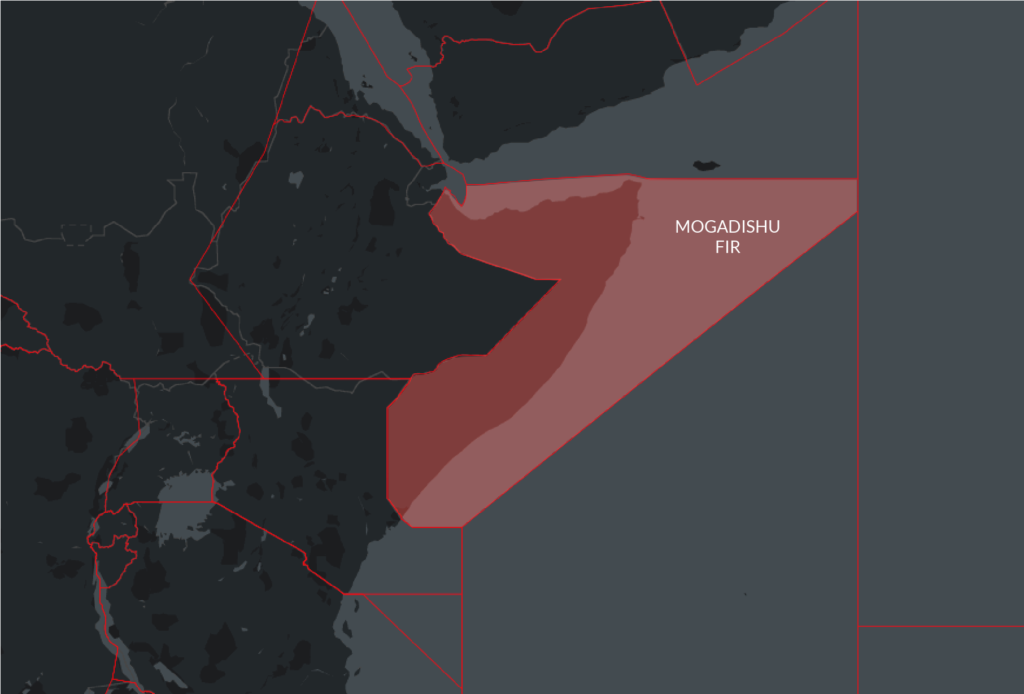 Somalia and the Mogadishu FIR

Al-Shabab are an insurgent group seeking to establish an Islamic State in Somalia. They are active across Somalia, as well as Kenya and Yemen.

In 2006, Ethiopia supported the transitioning Somalian government to push Al-Shabab out of Mogadishu. In recent years, an African Union-led military campaign has been in force against them. The group retreated from Mogadishu, but still frequently target HCMM/Aden Adde airport, and the capital city, using small arms fire and vehicle-borne IEDs.

They also potentially have access to anti-aircraft capable weapons. 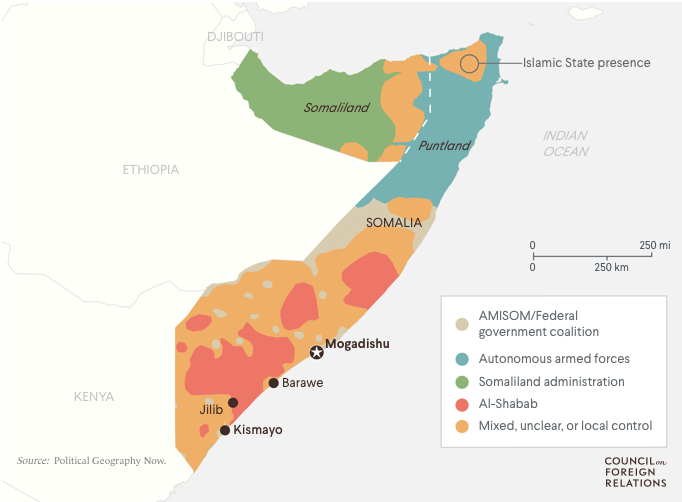 Showing the primary area of control by Al-Shabab in Somalia (Credit: Council of Foreign Relations)

Which is why there are some big warnings for the region.

In our SafeAirspace risk assessment, Somalia is a Risk Level Two – Danger Exists. The reason for the Level Two rating comes down to the fact the risk is predominantly limited to certain levels. The threat to aircraft is generally low level, with high altitude overflights less at risk.

Most authorities have therefore issued AICs which advise against flights below FL260 across the HCSM/Mogadishu FIR, or operations into Somalian airports. Certain airways such as UR401 SIHIL – AXINA only route over the oceanic airspace and so are exempt from the “Don’t Fly” warnings.

The USA have KICZ Notam A0005/21 in place warning against flights below FL260, along the region bordering Somalia (40°E). 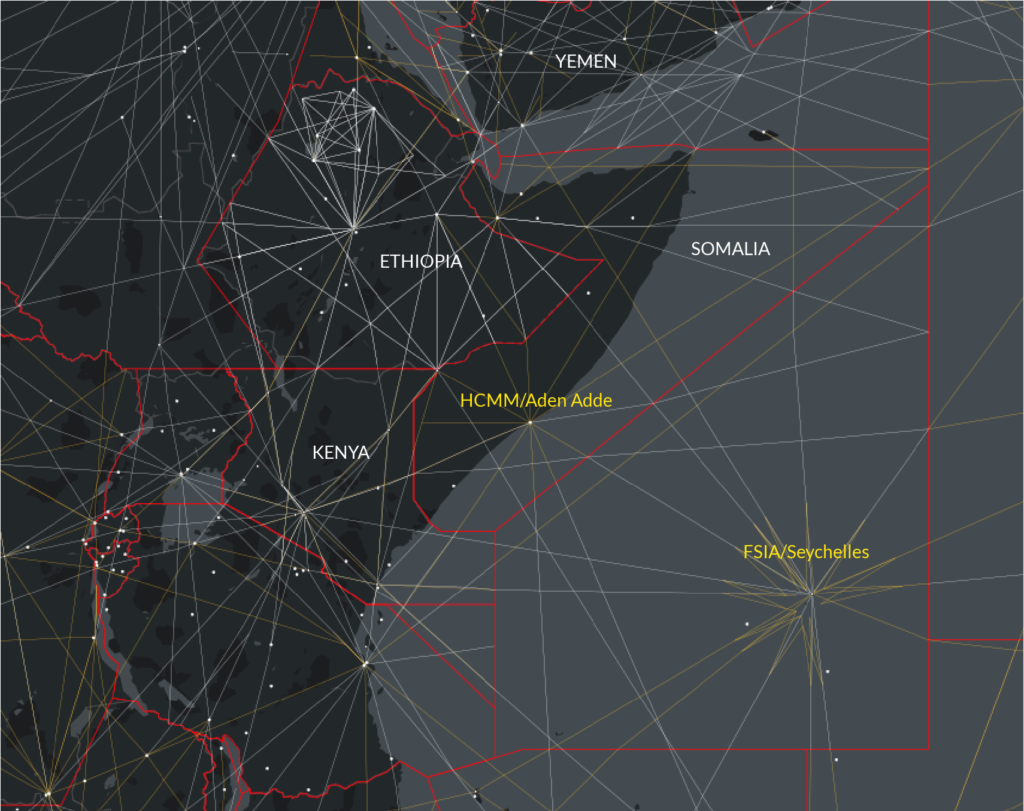 The region and the airways providing a major into Africa

The threat within Somalia.

The main threat comes directly from Al-Shabab who may have access to anti-aircraft weaponry. They pose a threat to low level aircraft and to security and safety on the ground as they frequently target Aden Adde airport with mortar attacks.

There is an additional threat from the Ethiopian military forces – the possibility of misidentification of civilian aircraft by them.

In 2020, a Kenyan cargo plane was inadvertently shot down following a misidentification. The cargo aircraft was routing from HCMM/Mogadishu to HCMB/Baidoa.

The threat beyond Somalia.

Al-Shabab have also targeted neighbouring countries. While the infrastructure and security in these countries is stronger than Somalia, which reduces the hazards and disruptions to airborne aircraft, it still presents a high security risk on the ground.

In early 2020, a complex attack was carried out against a Kenyan military base which houses US troops. Similar targets in Djibouti were also identified.

In 2016 , an Airbus 321 was targeted with a bomb on board which exploded shortly after takeoff, earlier than intended. The aircraft was able to land safely at Mogadishu.

Some arrests of Al-Shabab operatives were made in December 2020. A Kenyan man and member of the group was planning a “9-11 style attack”, and had enrolled in a flight school in the Philippines, intending to obtain a pilots licence with the purpose of gaining access to a flight and using this as a means to carry out the plan.

In 2019, a major attack on a hotel in Nairobi, Kenyan took place. Operators should be aware of the ground threats, particularly the security issues for their crew if they are staying in major hotels in regions Al-Shabab have targeted previously.

Kenya had its airspace threat level downgraded in 2018. There remains a ground based risk to security.

Sites such as International SOS provide good, up to date information on ground security threats. 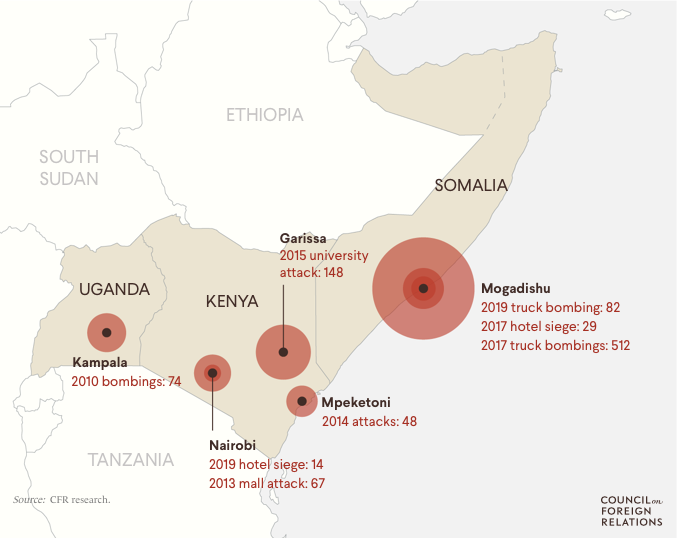 Additional risks to aircraft operating through the region.

HCMM/Aden Adde is the only major airport in Somalia. Aircraft routing down the east coast of Africa are limited in their emergency and diversion options. HDAM/Djibouti to the north, HKMO/Mombasa to the south or FSIA/Seychelles to the east are the only relatively close ones.

In the event of a time critical emergency, if crew use HCMM, security and safety on the ground must be considered. In the event of a diversion, with limited options, careful and regular checks of the weather (due to common storm build ups during summer months) will be critical to ensure the aircraft is not committed (fuel wise) to an airport which then becomes unsuitable.

A closer look at Somalia.

Aden Adde International airport is the primary airport for Somalia. It has a single runway 05/23, which is 10,446 feet (3184 meters). The only published approaches are RNAV (GNSS) or RNAV (RNP) for runway 05.

There is minimal apron space and parking, and only a single taxiway midway down the runway meaning backtrack and 180 degree turns are required.

There is a ‘Do Not Descent below FL100’ sector north and northwest of the airport, and the RNAV approaches descends and routes aircraft over the sea to avoid aircraft flying over the land low level, where risk of attacks would be significantly increased.

Despite the potential risks, several international airlines do operate into Aden Adde. 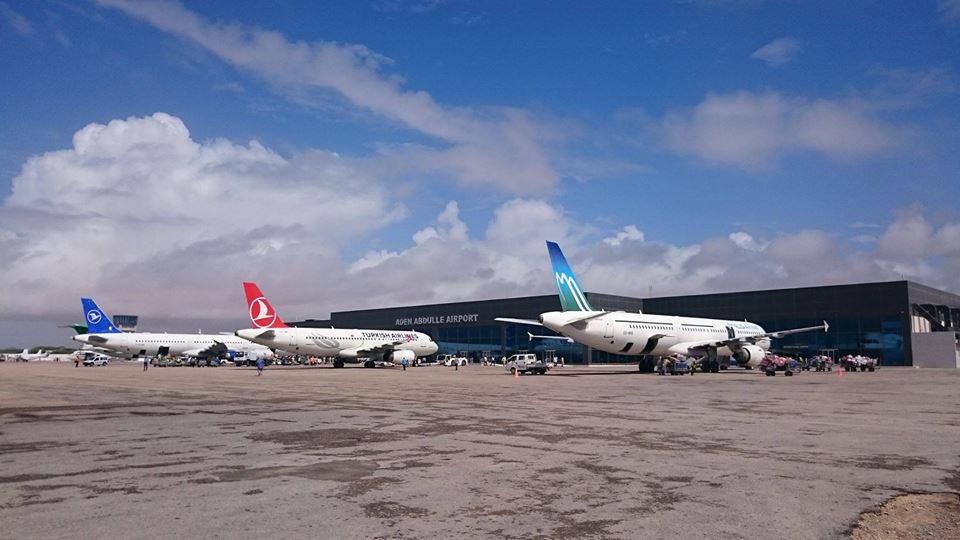 A photo taken in 2015 suggests the airport conditions are below standard (Credit: Axmadyare)

Because of the position of Yemen, which is a ‘no fly’ country, and Eritrea and Ethiopia where the Tigray region is also a ‘no fly’ area, aircraft are limited in the connecting routes to and from Africa. Routing via Egypt and through Sudan and South Sudan is longer, and has other challenges and airspace risks associated with it.

Routing along the east coast oceanic section of Mogadishu airspace is significantly shorter.

All of the Mogadishu FIR is Class G airspace, with only an FIS.

The infrastructure in Somalia is limited. The minimum radio and navigation equipment requirements for overflights are:

There is a H24 flight information service and alerting service in the Mogadishu FIR, callsign “Mogadishu Information”.

Aircraft need to check in at least 10 minutes prior to the ETA for the FIR entry point.

Routing through the airspace, aircraft are required to maintain a listening watch on the IFBP frequency 126.9. If aircraft experience an HF failure, they should attempt to contact Mogadishu FIC via SATCOM, or request relays via other aircraft.

Al-Shabab present a risk both directly to flight operations, and to operations and ground security in neighbouring countries:

Somalia has its own CAA. The need for better infrastructure and equipment because of the importance of overflights through the Mogadishu FIR has led to other State’s funding and supporting the CAA.

The UN work with Kenya to organise humanitarian air services and missions into Somalia. More information can be found on that here.