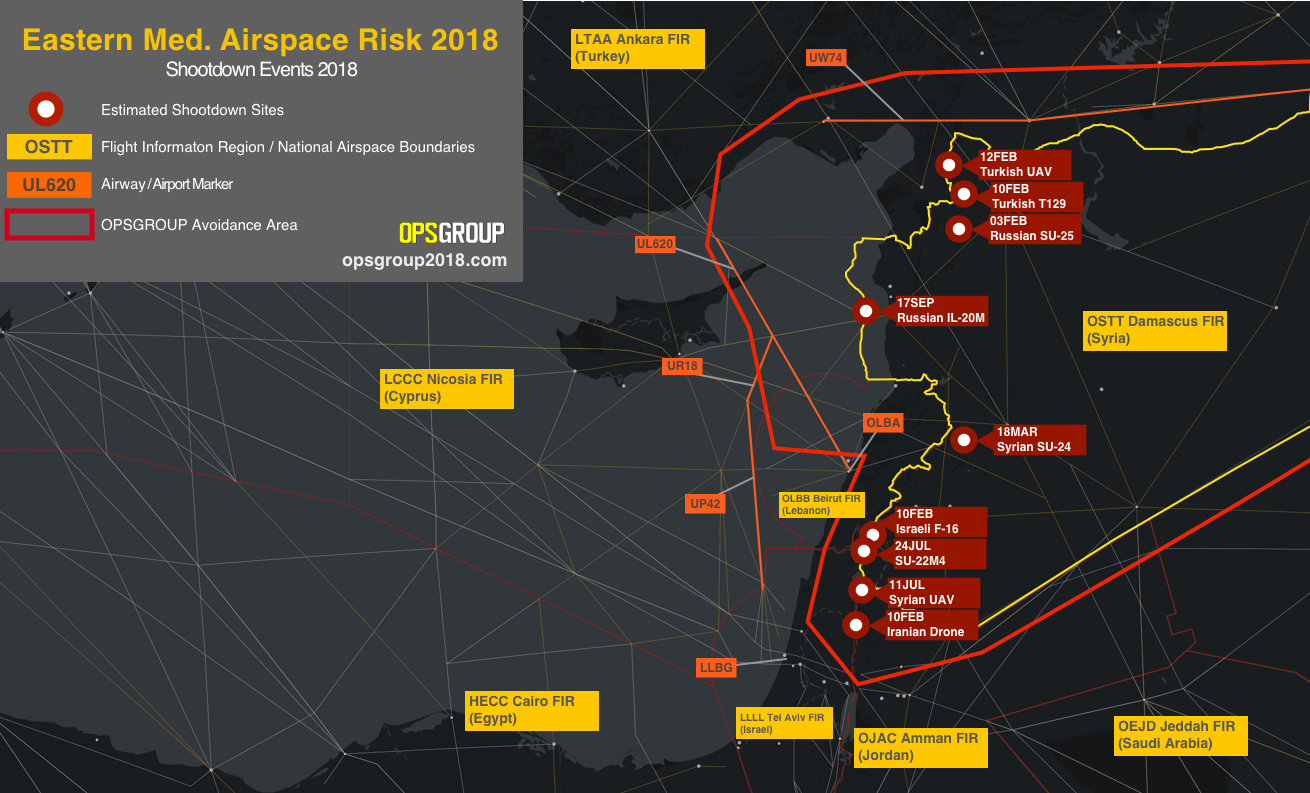 Why are we still flying airline passengers over war zones?

Why are we still flying airline passengers over war zones?


Here’s the level of inconsistency we’ve reached in international air transport: we take each passenger, scrutinize their booking, check the no-fly-list, watch them on CCTV, pull them apart at TSA, remove anything sharper than a pen, question them, x-ray the bags, run Explosive Trace Detection tests, screen the hold baggage, background check every member of the crew, and then, once they’ve all boarded, fly this ultra-secure airplane straight into a war zone.

Welcome to the Eastern Mediterranean. It’s an active conflict zone. The Russian naval build up there this month is the largest since Moscow’s intervention in Syria began in 2015. Over Syria, 9 aircraft have been shot down this year.

The most recent was on Monday night this week, when Syria came under attack from Israel fighter jets, and started firing indiscriminately at anything off the coast that looked like a threat. They wanted to shoot something down, and they did — except it was a friend, not foe. They took out a Russian Ilyushin IL-20M transport category airplane. Even on the worst radar, that doesn’t look anything like an Israeli F-16.

50 miles away from where the Russian aircraft plunged into the sea on Monday night is the international airway UL620, busy with all the big name airline traffic heading for Beirut and Tel Aviv. If Syria can mistakenly shoot down a Russian ally aircraft, they can also take out your A320 as you cruise past.

And yet, most airlines continue to operate. Are we really so comfortable with operating in conflict zones again?

The lessons of MH17 seem to be fading fast. It’s a little over four years since 298 people lost their lives over Ukraine one summer afternoon, thanks to an errant missile fired during a civil war at an aircraft that they thought was a military threat. “Why were they over a war zone”, everyone cried afterwards.

Well, we all were. Me too. I was a pilot for Austrian Airlines at the time. I recall one morning in Vienna, some months before MH17. Boarding the last of the passengers, my BBC news app flashed up a story about a helicopter being shot down in eastern Ukraine . As we were headed east, with my colleague in the cockpit, we quickly plotted the position on our enroute chart, and noted that it was really close to our route. Maybe 30 miles north. “We might see something interesting!”, we said, and pushed back. We didn’t, nor did we think much more about it.

Do you see the thought process though? Before MH17, we didn’t consider the risks to our aircraft from war zones. Especially being so high. Helicopters might be getting shot down, but we’re at 35,000 feet. No problem.

This is why all of these airlines — mine, at the time, included — operated on the route.

And then it happened, and none of us could quite believe it.

But we learned. “Conflict Zone” became a buzzword. We had task forces and committees, whitepapers and promises, and — myself included — talked at length about how this happened, why, and how to avoid it in the future.

And yet, here we are flying unsuspecting passengers along the Syrian border. If you’re unsuspecting enough, and buy a SkyTeam codeshare ticket — you’ll actually overfly Syria on the Honey Badger airline of the region, Middle East Airlines.

Here we are flying passengers in the Eastern Mediterranean war zone. Why is this happening?

What about Turkey? Anything on the Eastern Mediterranean risk? Let’s have a look. Nope, just 132 Bullshit Notams, and something about an AWACS aircraft. See you back here in 30 minutes when you’ve read them all.

Remember, I’m being a pilot, an airline, a dispatcher, trying to find information on the Risk in the Eastern Mediterranean. And this is how hard it is.

EASA (European Aviation Safety Agency), how are you doing? Let’s start here, at the “Information on Conflict Zones”. Paragraph 2 tells us that ICAO have a Central Repository on Conflict Zones, launched in 2015.

No, they don’t. That died — quite a long time ago. This is where it used to live. So, there is no ICAO Central Repository on Conflict Zones. There is a new ICAO document with guidance on managing Conflict Zone risk (and it’s a bloody good one, too) — but where is the picture of current risk?

Let’s plough on through the EASA site. Aha! Seems we have a Conflict Zone alerting system, and Conflict Zone bulletins. Here they all are: https://ad.easa.europa.eu/czib-docs/page-1

The last one on Syria was issued on April 17th. But it seems to be just a list of Notams issued by other states. And these are out of date. The German Notam has expired, the French AIC has been replaced.

How am I supposed to know, as an operator, or pilot, what the risks are and where to avoid. We’re getting closer to the point here. You’re not supposed to rely on the Aviation Authority. That is their message. You must conduct your own risk assessment. You must research and find out about the risks yourself.

You are on your own.

If you’re a big airline, that’s probably fine. You’ll make your own decisions about where to fly, anyhow. But what about everybody else?

While OpsGroup works hard to get information out to our members — and we spend a lot of time researching risk — I would greatly prefer that we didn’t have to.

Aviation Authorities must issue better guidance for the aircraft entering their areas.

Let me remind you. Airlines are operating 50 miles from a position where an airplane was shot down at night, by a missile type that’s already taken out a passenger airliner by mistake, fired by a beleaguered Syrian defence post, at a friendly aircraft that they did not take time to identify.

And the guidance to operators from Authorities: NIL. 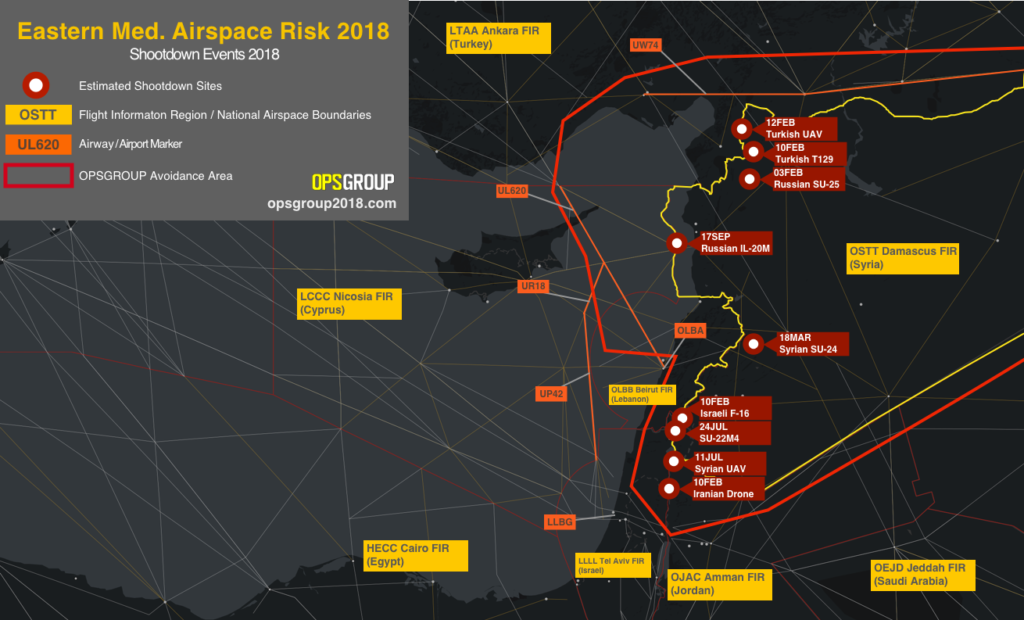 Opsgroup has now published Note 31: Airspace Risk in the Eastern Mediterranean. There is a clear risk to civil aircraft operating on airways UL620, UW74, UR18, and UP62. In simple terms, if you find yourself planned overwater east of Cyprus, reconsider your route. 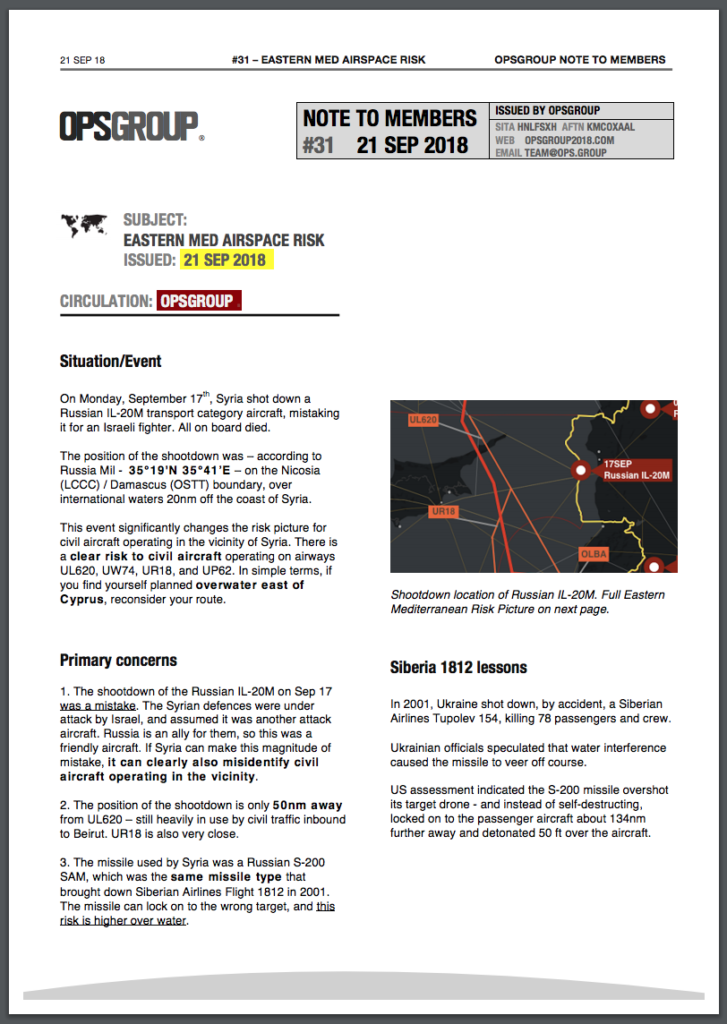