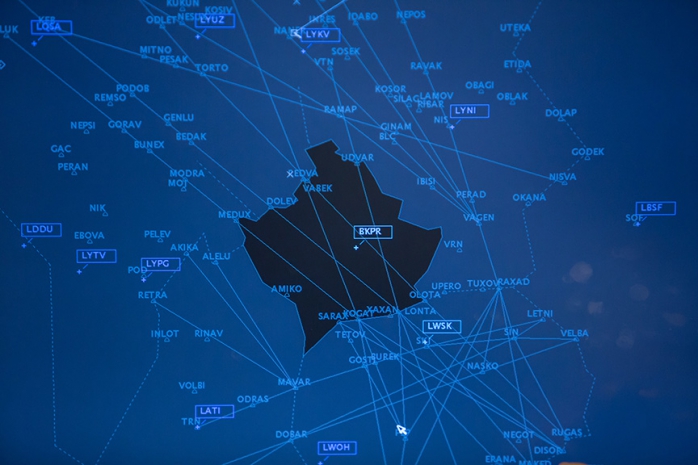 The Normalising of Balkan Airspace

The Normalising of Balkan Airspace


The Kosovo War took place several decades ago. It was a conflict between the Serbs (former Yugoslavia) who had controlled Kosovo before the war and considered the land sacred, and the Kosovan ethnic Albanian rebel group who wanted Kosovo to have their independence (and ethnicity) from Serbia recognized.

Following the war, the usual sort of reaction from all parties involved ensued – namely Serbia refusing to talk to their new neighbour, Kosovo. Despite the conflict having been resolved several decades ago, there has been an ongoing impact on aviation in the region because of the continued political tensions between the two countries.

Tell us something about Kosovo?

Kosovo is a landlocked country bordered by Serbia to the Northeast, Montenegro to the Northwest  and North Macedonia and Albania on the other sides.

It only has three airports –  two small domestic airports, and then BKPR/Pristina International.

Pristina International, also known as Adem Jashair, is a single runway airport. Runway 17/35 is 8,205’ (2501m) and has a CAT II ILS onto 17 and VOR DME onto 35. They have limited maintenance facilities and JET-A1 on prior request. 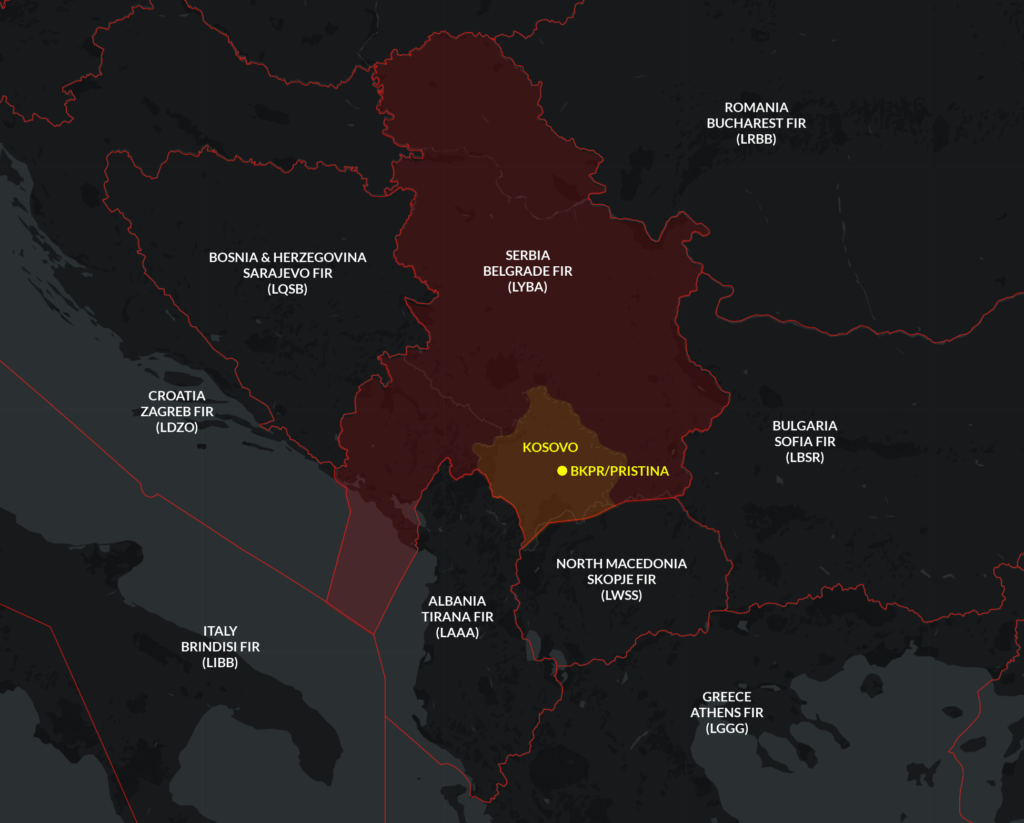 What was the airspace issue?

In short, Serbia refuses to allow Kosovan bound aircraft to route through Serbian airspace. This included upper and lower airspace.

Since the bit where Serbia borders Kosovo makes up approximately half of Kosovo’s entire border, the overflight ban resulted in a major detour for any aircraft wanting to fly in or out Kosovo, and control and safety was limited.

In 2014, Hungarocontrol (Hungarian ATC) sorted the upper half the problem by assuming responsibility for all the upper airspace in the region. With them controlling all flights over FL205 (the lowest available flight level being FL210) this made it a lot easier for aircraft to route over some of Serbia. Aircraft still had to route around to Albania and North Macedonia in order to descend into Kosovo since SMATSA (Air Traffic Control of Serbia) continued to refuse aircraft to overfly the territory of Serbia below FL205.

The official re-opening of the upper airspace info can be found here. It is seven years old but still an interesting bit of historical Notamage.

This airspace falls under KFOR. Kosovo also has no designated RCC. Operations are under the control of the Combined Air Operations Centre Torrejón –  a military (NATO) command centre in Spain. Actually, they are kinda cool. They secure the skies, respond to crisis, protect territory and populations and do a bunch of other impressive peacekeeping stuff. So while Kosovo airspace is referred to under the Balkans airspace, it is still looked after by NATO.

But back to Kosovo – control for Pristina Airport was therefore from surface level to FL205, with Hungaro taking over from there. The only way in and out of the airport was via the southern border with Macedonia.

What has happened now? 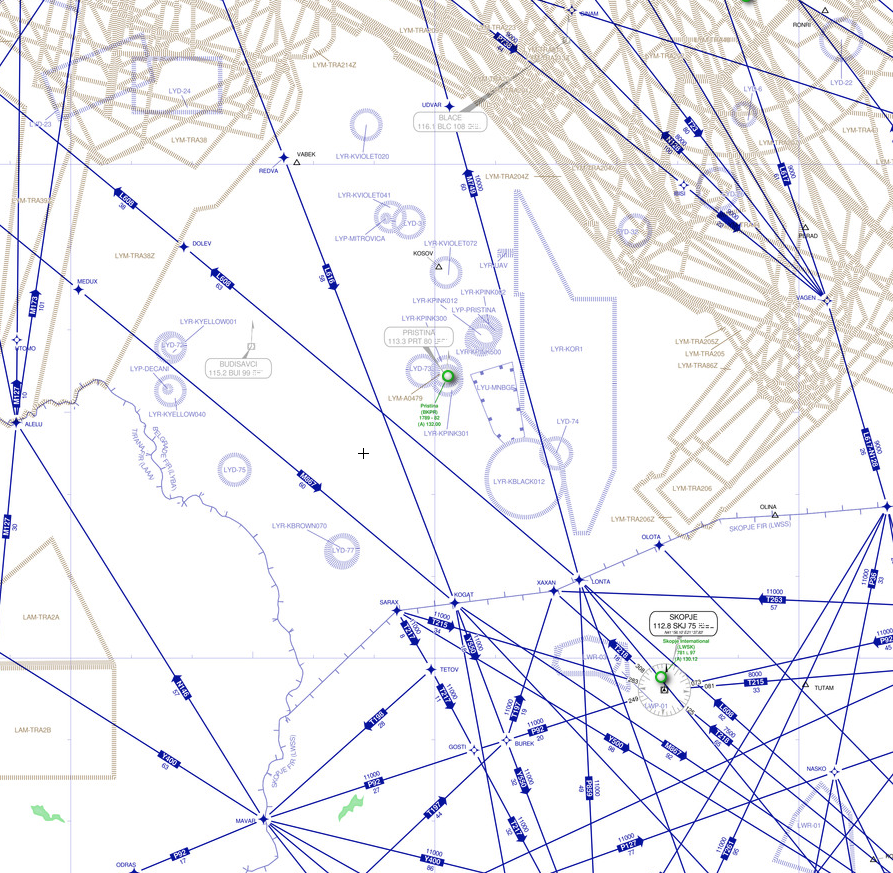 The new lower airspace will be controlled by Iceland, organized by NATO under their Balkans Airspace Normalisation program. Iceland will offer safety oversight and also help support technical solutions to allow more airlines to launch flight to and from Pristina in the future.

This is the official NATO news on this news.

Airspace up to FL205 over Kosovo forms the Pristina ANSP. Everything in the CTR and CTA is Class D. Outride of that is Class G. General Air Traffic are not allowed in the Class G bits without prior permission (keep this in mind if you need to make weather deviations – it all has to be cleared by ATC unless a proper emergency).

General Aviation Traffic have the following routes available to them:

Although this does not mean a major change for routings, the “normalisation” of control and airspace (high and low) is a step forward.

Well, that’s about it for now. There was apparently an agreement signed in 2020 between Serbia and Kosovo to start allowing flights between BKPR/Pristina and LYBE/Belgrade, but so far no sign anyone is planning on starting up this route.

The Kosovan CAA page is here (although much of it does not work). There are some old AIPS published so keep an eye out for the new ones showing the shiny new ATS routes.

They want at least 3 days notice.

All the forms for requesting slots, and all the information on this can be found document entitled “Regulations for aircraft operating as General Air Traffic in the Balkans’ v4.0” which we have provided right here for you.