Thinking about heading to Scotland for some whisky, golf or a plate of haggis? Here’s a little ‘Top Trumps’ guide to three of the airports you might be thinking of operating into.

(If you want to visit Trump International golf course in Scotland then that’d be EGPD/Aberdeen you’re after).

Scotland at a glance.

Scotland offers several international airport options. We already mentioned EGPD/Aberdeen which is northeast. Even further north you have EGPE/Inverness up in the Highlands. The HIAL (Highlands and Islands) Airport Group look after eleven airports up in the north region.

EGPN/Dundee and EGPT/Perth are your central easterly choices, with EGEO/Oban to the west (and a couple out in the islands).

Your top three which lie closer to the border with England however are EGPF/Glasgow, EGPK/Glasgow Prestwick and EGPH/Edinburgh. So we thought we’d take a look at those. 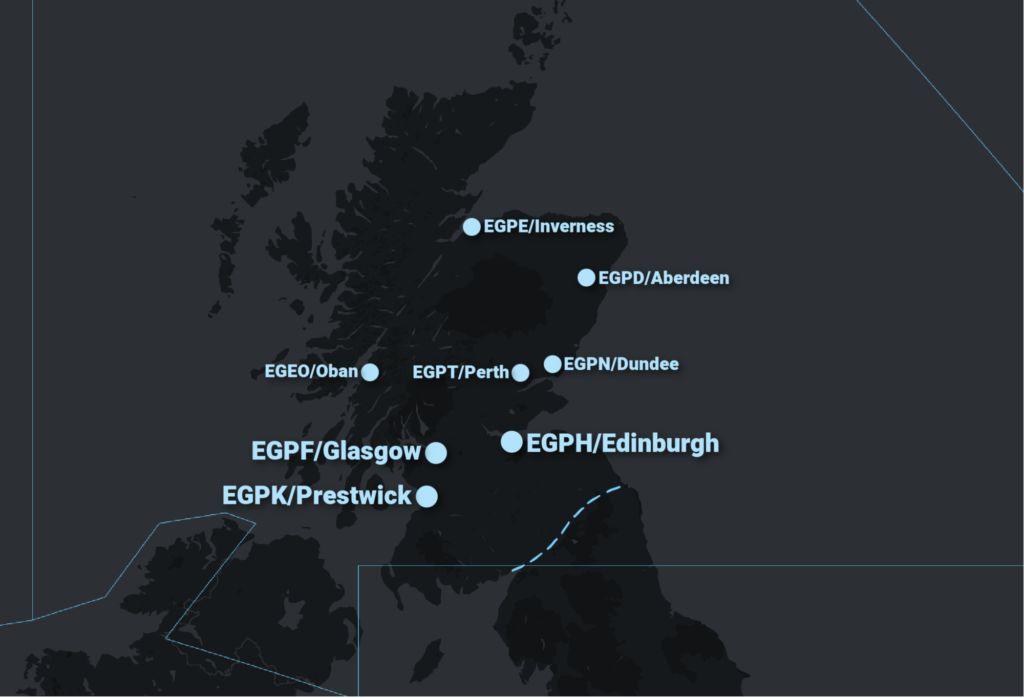 Scotland is part of the United Kingdom. Like the rest of the UK they use Great British Pounds (GBP), and aviation is controlled by the UK CAA.

NATS provide the ATC services through their Prestwick Centre. You’ll probably find yourself speaking to Manchester Area Control (MACC) if you fly through England, before handing over to Scottish (ScACC) and potentially Oceanic (OACC) who control the eastern half of the NAT from 45 degrees north (Azores) to 61 degrees north (the boundary to Iceland).

You generally don’t need permits to overfly and land, unless you are a commercial flight wanting to land. That said, some airports do have slot requirements and to head into the UK you do need to fill out a General Aviation Report, and ensure customs have a copy at least a day in advance. If you’re a commercial operator, give it two days and if it’s for a series of fights then five will keep you organised.

Head here for info on this, or email foreigncarrierpermits@caa.co.uk for help with permits 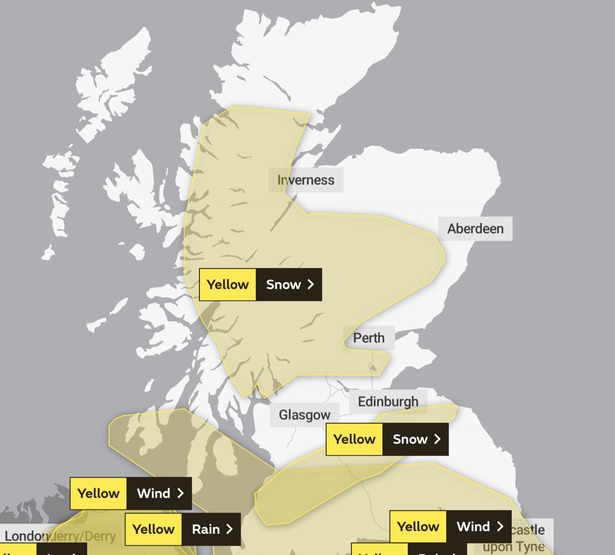 Warning about yellow snow are common across the UK in winter…

We’ve given this its own section because the weather in Scotland can be challenging. Along the southern region it is milder but you are still going to be faced with some serious snow and winter ops conditions from time to time.

Back in 2017, major snow storms resulted in the closure of Scottish airports, and many a day of disruption. It happened again in 2018, and in fact does pretty much every year. Fast forward to now (2021) and a town in Aberdeenshire just recorded the coldest temperature seen in the UK in 26 years (minus 23°C, or -9.4°F for our American continent friends).

So Scotland gets cold and snowy. This means you need to think about your cold weather ops, in particular:

Thinking of Glasgowing to the capital?

Then you probably want to fly to Edinburgh. Despite being the biggest city, Glasgow is not actually the capital of Scotland. It does however boast a nice airport for you to use.

EGPF/Glasgow – the runway 05/23 is relatively short at just 8743 feet (2665 meters) and you have a displaced threshold to think about as well. That said, the Airbus 380 can get in here so it isn’t that small, and both directions offer CAT III capability.

Biggest threat: Some terrain and a busy missed approach because of it. 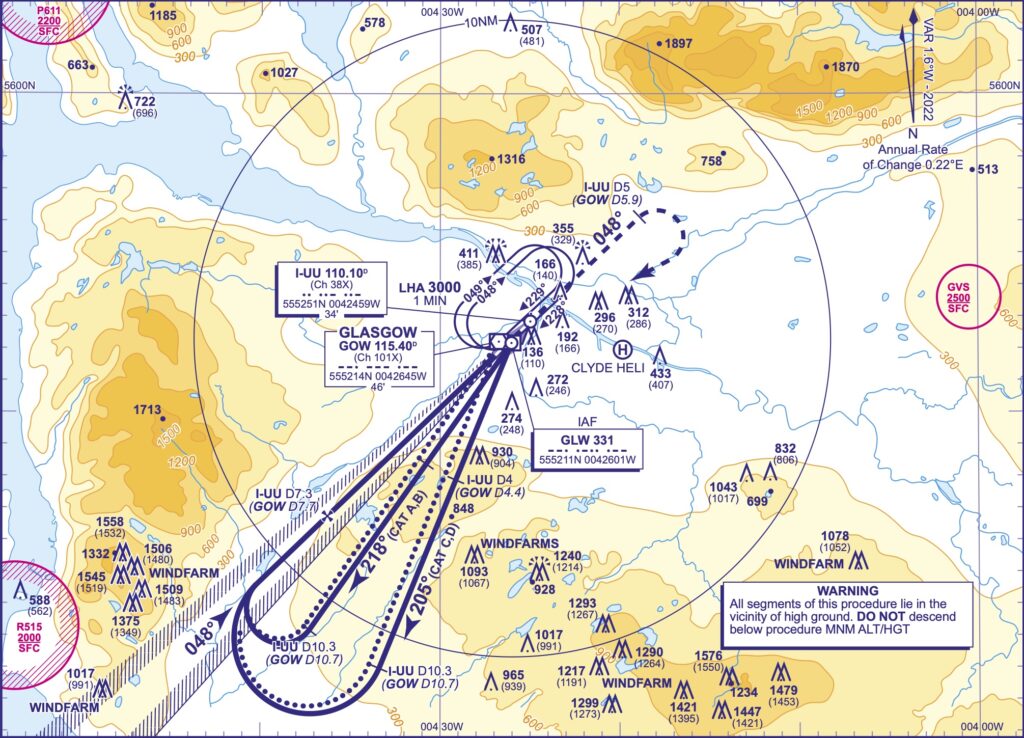 Many obstacles and a busy chart. 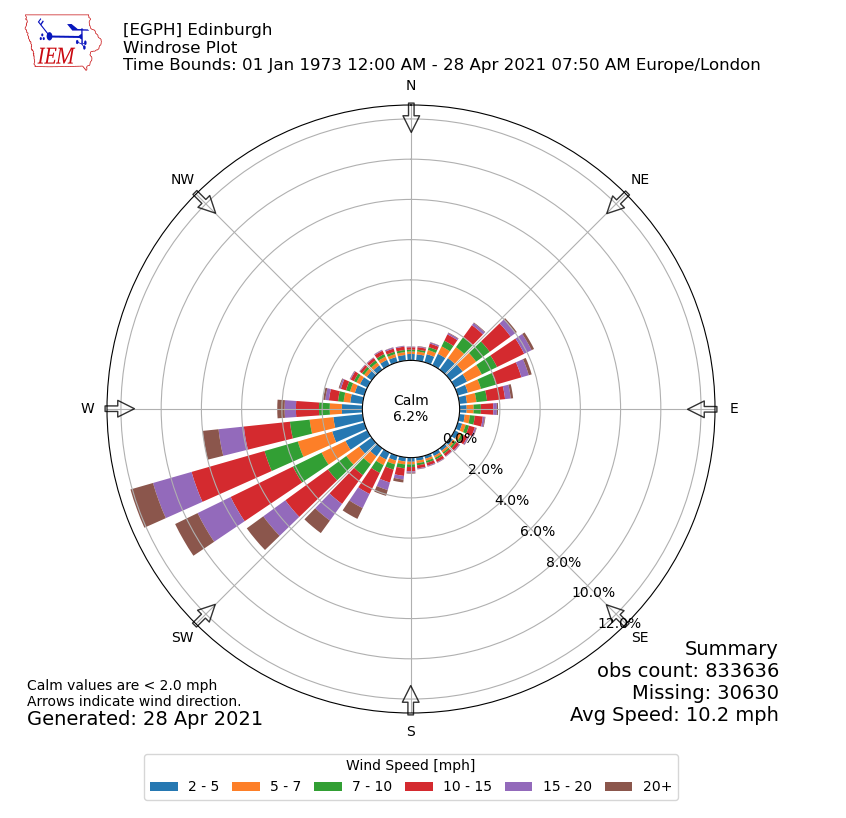 EGPH/Edinburgh also has a single runway 06/24 which is shorter than Glasgow’s at just 8386 feet (2556 meters). It also has CAT III capability in both directions.

Edinburgh gets windy. When there are strong south to south west winds wind shear is common and can be vicious.

The airport had a new GA ramp open up in 2019 so parking is less of an issue, but this is still a fairly busy airport so plan in advance.

Biggest Threat: The weather in winter and the wind shear from those South/Southwesters.

EGPK/Glasgow Prestwick (not to be confused with EGPF/Glasgow) is your third choice in this area. It offers the longest runway option – 12/30 at 9800 feet (2987 meters) but is only ILS CAT I capable.

The topography at Prestwick is the main threat – it can cause some significant wind shear and turbulence.

The airport is a popular tech stop for aircraft routing from the USA.

Biggest Threat: The terrain under the arrival/approach area for runway 30. 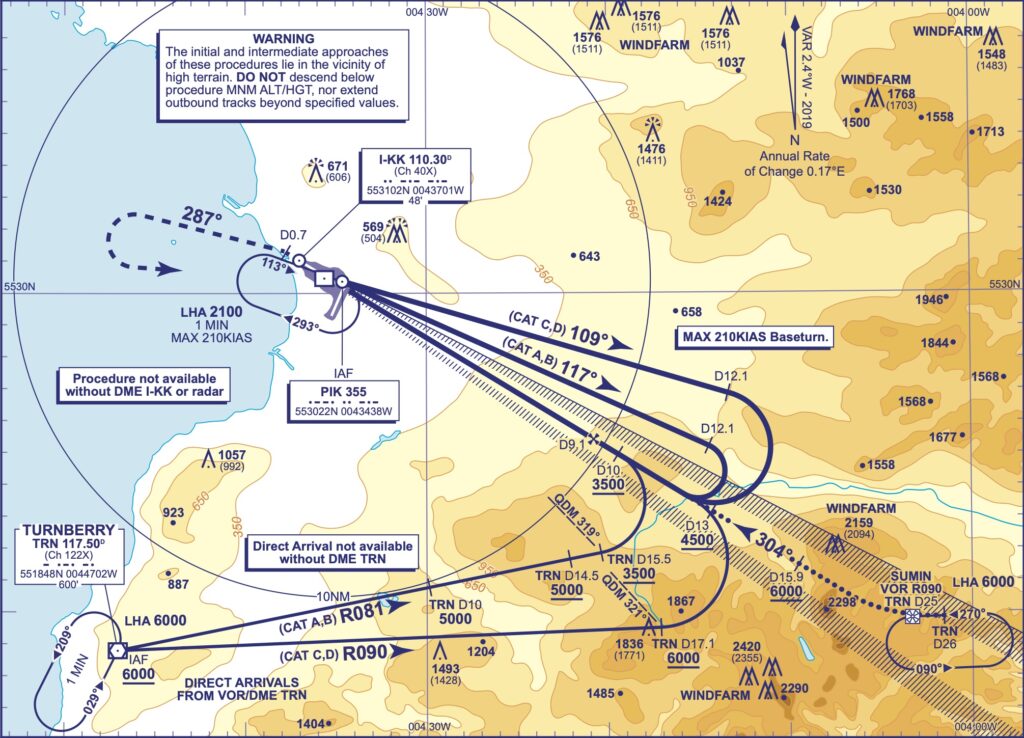 A Top Trump summary for you 🃏

We’ve made an Airport Lowdown for all three airports. If you are an OPSGROUP member then you can find them by clicking each of these thumbnails. 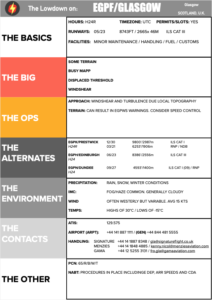 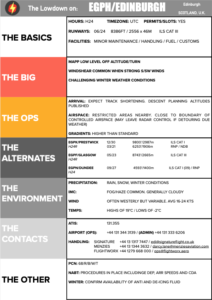 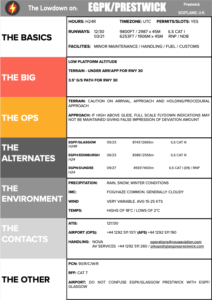 These Airport Lowdowns are the briefings we’ve started to put together on specific airports – the useful, practical, operational stuff. The threats, risks and gotchas that you discover with experience.

There are a bunch more available for other airports via Airport Spy in your dashboard.

To download the PDF for each airport:
1. Head over to Airport Spy in your dashboard
2. Search for the airport you want
3. Click on the “Docs & Data” tab