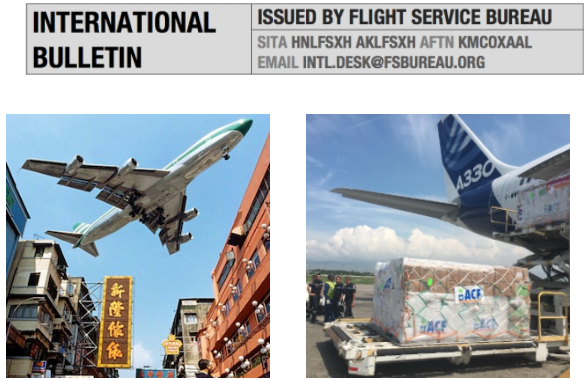 
Hong Kong is a pain in the ass – it’s official 20OCT Authorities in Hong Kong confirmed yesterday that the airport is a giant pain, especially for non-scheduled operators. Lining up slots, parking, permits and handling is extremely difficult. End result: a mountain of frustration. Read the article.

VTZZ/Thailand is in a period of mourning following the death of His Majesty, King Bhumibol on 13 October. This is a time of deep sorrow for Thai people – refrain from any behaviour that may be interpreted as festive, disrespectful or disorderly. Abide by local laws and respect Thai customs. There may be some disruption of commercial and public services during the mourning period, especially during the first 30 days (until 13 November). Tourist attractions are open with the exception of Wat Pra Kaew (Temple of the Emerald Buddha) and the Grand Palace in Bangkok. Expect traffic disruptions and heightened security around these areas as people pay their respects to the late King.

EBBR/Brussels All non-scheduled flights destined to EBBR are allowed only after special permission by Airport Authority before start of flight. Contact +32 2 7536900 or inspect@brusselsairport.be.

ORBB/Baghdad FIR Traffic entering from Baghdad FIR (ORBB) to Ankara FIR (LTAA) shall file their FPL as follows: NINVA-OTKEP-SRT at FL320 and above. NOTAM A4572/16 refers.

Solomon Islands There has been a confirmed outbreak of dengue fever in the capital city, Honiara; you should follow the advice of the local authorities and take steps to avoid being bitten by mosquitoes; you should take out comprehensive travel and medical insurance before travelling to the Solomon Islands

TXKF/Bermuda Due to maintenance, the Bermuda Radar system will be out of service on Friday. Recommended reroute to avoid airspace. New York Center overflight procedures will be in effect. Routes have been developed to provide limited non-radar service within the airspace. All departures from Bermuda will be held down at FL310.

OJAI/Amman, Jordan Runway 26L/08R will be closed for urgent pavement maintenance on these days in November:  01,08,15,22,29: from 0930-1330Z. The airport will not be available for either normal operations or emergency diverts during the closure period.

OEZZ/Saudi Arabia From 8 to 10 October there were several missile attacks reported near the Saudi / Yemeni border and the southern Red Sea.

ZZZZ/Worldwide Regulatory and voluntary bans on Samsung Galaxy Note7 smartphones is spreading as airlines and airport authorities around the world are announcing bans or restricted usage on the device, which has been withdrawn by Samsung after some devices caught fire. Ban notices are being issued primarily through airline online check-in pages, as well as via public announcements in airport terminals and onboard aircraft. The US Department of Transportation (DOT) was first to issue a total ban on taking the device on board, as a passenger or as air cargo, when it gave an emergency order Oct. 15 with FAA.The devices are being banned because of fire concerns, and the fallout following an incident involving a smoking smartphone on board a Southwest Airlines aircraft in Louisville, Kentucky on Oct. 5.

YZZZ/Australia will not be implementing the changes in the ICAO PANS-ATM (Doc 4444), as they say they haven’t had enough time to work on the safety case – ie. figuring out if these changes are dangerous in any way. In short, they won’t be saying “Climb via SID” or “Climb via STAR”, which are the new phraseologies.

TTZP/Piarco wins the award for most confusing AIC of the week, namely AIC03/16 issued on 13OCT. Titled “RVSM Implementation”, it appears that Trinidad is finally implementing RVSM in their airspace. But wait, they did that in 2005. So what’s new in this AIC? It’s a mystery. Take a look and see if you can spot it.

KLAX/Los Angeles 3 out of the 4 runways at KLAX have now been renovated. Runway 6R/24L reopened on 16OCT after renovations. Improvements to the fourth and final runway, 07L/25R, will begin OCT22 and continue until June 2017. This last runway will be partially closed until January, and then closed completely to allow for more extensive work to be done

UHPP/Petropavlovsk Eruption in progress at Klyuchevskoy volcano (N5603E16038) near UHPP. Ash cloud reported at 0720z on 17 Oct from ground level up to FL300.

VVZZ/Vietnam Typhoon Sarika is forecast to bring hazardous sea and weather conditions to parts of northern Vietnam from around 19 October 2016; heavy rainfall could lead to flooding and landslides

OIIX/Tehran FIR The minimum safe level on R462 between DENDA and METBI has been raised to FL140.

KSFO/San Francisco has a new ATC Tower operational since Sunday last, located between Terminals 1 and 2. Per the local report, it “offers controllers a 650-square-foot work area with unobstructed 235-degree views of the airport’s runways and taxiways”. Hopefully there’s not much going on in the other 125 degrees.

OSZZ/Syria Russia’s only aircraft carrier, Admiral Kuznetsov, is nearing the end of a work-up period outside the port of Murmansk before heading for the eastern Mediterranean, reportedly to begin air operations against targets in Syria.

RPZZ/Philippines Typhoon Sarika recently passed through the island of Luzon as a category 4 storm. Transportation routes, power and telecommunications systems could be affected in some areas. Other services that may be affected in these areas include emergency and medical care, as well as water and food supplies. If travelling to affected areas, exercise caution, monitor local news and weather reports, and follow the advice of local authorities.