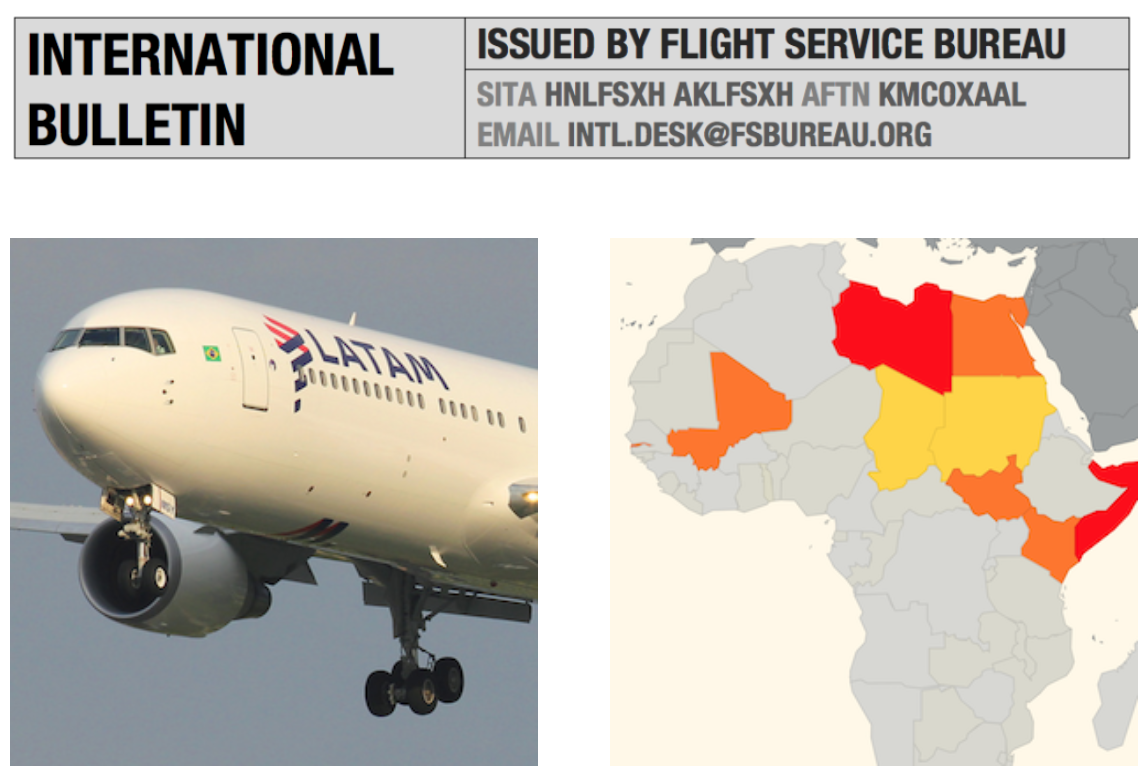 18JAN A B767-300 was fired on last night during approach to Runway 15 SBGL/Rio de Janeiro. One 7.62mm bullet lodged in the left wing. Read the article.

18JAN We have updated SafeAirspacewith information for Aircraft Operators on The Gambia, North Korea, Brazil, Ukraine, and Turkey.

UKZZ/Ukraine Flight Service Bureau has issued an updated summary for Ukraine’s airspace. There are two risk issues in Ukraine. First: arms fire. Including MH17, multiple aircraft (the others all military) have been shot down since the beginning of the Donbass region war in 2014. The 10th ceasefire was declared in December 2016, but not holding. This risk is contained within the Dnipropetrovsk FIR – UKDV. The second issue affects the Simferopol FIR which is Disputed Airspace. (Ukraine:UKFV, Russia:URFV). In March 2014, Russia annexed Crimea. The ATC Center is in Simferopol, Crimea, and is now run by Krymaeronavigatsiya. Russia claims the airspace. Ukraine refuses to recognise the change, and asks crews to talk to Ukrainian controllers in Dnipro/Odesa ACC instead of Simferopol ACC. Four routes are approved by EASA through the high seas portion of the airspace.

KIAD/Washington and area airports – guaranteed busy during the Presidential Inauguration this Friday, Jan 20. Updated restrictions here. Departure slots required for aircraft departing IAD between Friday, Jan. 20 and Sunday, Jan. 22. Departure slots can be obtained through an IAD FBO of choice (Ross Aviation or Signature Flight Support). Slots will be divided equally between the two FBOs at IAD.

VZZZ/Southeast Asia Lunar New Year holiday season, which falls on 28th Jan. Travel-related delays and government office and business interruptions will peak 27 Jan to 01 Feb, and could last longer in Taiwan, Vietnam and China, where the holiday will be celebrated through 02FEB.

BGBW/Narsarsuaq A seasonal reminder that if you’re planning to use Narsarsuaq as a destination, alternate, or enroute alternate outside of the operating hours (MON-SAT 1000-1900z daily until 03APR), you must contact the airport in advance to apply for them to stay open for you:
Email: bgbw@mit.gl. Also make sure you file your ATC FPL including the AFTN address: BGBWZTZX.

EGPH/Edinburgh, Scotland Until Apr 1st, you will need PPR to operate to Edinburgh, due to reduced parking capacity.

RPLB/Subic Bay will be closed for maintenance bewtween 0100-0800z until January 20th.

SKZZ/Colombia New Tower and ACC for Bogota. From 16th Jan – 15th Feb moving of Bogota’s ACC will take place. ATS/AIS/COM/MET/ATFM services transition process should not affect operations, however, due to the large change extent foreseen, some failures might occur in the process.  AIC 1/17 outlines contingency procedures in place

SVZZ/Venezuela has closed its land borders with Colombia and Brazil periodically in the last 12 months. Border closures occur frequently, often with short notice. The Venezuelan government will withdraw the 100 bolivar note (VEF 100) from circulation as of 20 January 2017.

LYBA/Beograd If you have any outstanding navigation fees in Serbia, better get them paid, or they’ll add a 9.88% interest charge.

HSSS/South Sudan Flight Service Bureau has issued an updated summary for South Sudan’s airspace: Conflict Zone. South Sudanese Civil War since 2013. The security situation in Juba has been relatively calm since the July 2016 crisis. Daily reports of fighting throughout the rest of the country. The security situation is especially unstable in the Equatorias in the south. MANPADS risk to overflights. In addition, the South Sudanese army has declared intention to shoot down Aircraft without permits. Most Authority guidance recommends min FL260. We think FL300 is a better minimum for overflights.

ZKKP/North Korea Flight Service Bureau has issued an updated summary for DPRK North Korea’s airspace: The level of tension on the Korean peninsula can change with little notice. Multiple missile launches in 2016, increasingly without prior notice to ICAO. The range of these has increased – previously safe airways B467 and G711 are now at risk. Over 1000 reports of GPS jamming issues reported by operators in the vicinity of the North/South Korean border. SFAR79 prevents US operators from operating west of 132E, other Authorities restrict operationseast of that line.

ZZZZ/Worldwide How have you been getting on with the new ICAO SID/STAR phraseolgies? In short, some countries are implementing, and others aren’t. What is your country doing? Tell us at bulletin@fsbureau.org.