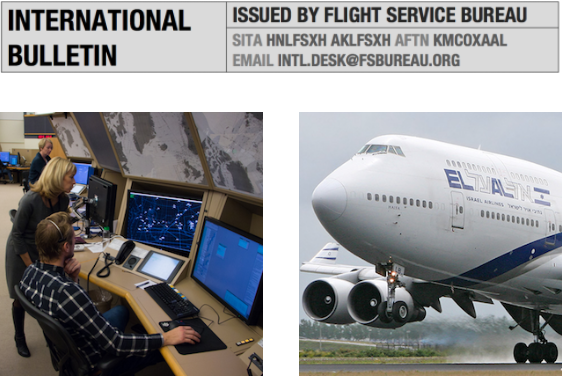 
Iceland ATC strike – end in sight 22JUN Operators on both sides of the Atlantic have been frustrated over the last 6 weeks with continual sporadic ATC Industrial action. And end may be in sight, but in the meantime keep a close eye on BIRK, BIKF and BIRD Notams. Read the article.

FPL changes: Israel 22JUN Current Flight Planning procedures for flights across Europe from Israel will change in light of a new agreement signed between Israel and Eurocontrol. Read the article.

EGGX/Shanwick is having an 80’s party on the 28th of June at 1600Z. For engineering work, all the new technology is being taken offline for three hours, so no CPDLC, ADS-C or OCL. Instead we have Voice Reports, HF, Manual Clearance Requests (123.95 or 127.65), and so on; just like the good old days. When you hit 30W log on to Gander manually.

UMZZ/Belarus The Minsk FIR has updated its table of cruising levels and altitudes below Transition; view the AIC.

Gambia The UK FCO issued updated travel advice for The Gambia : “Demonstrations took place in April and May 2016 in Banjul. Demonstrations could occur at any time in any part of the country prior to presidential elections planned for 01DEC. You should be vigilant, avoid all demonstrations”

LPZZ/Portugal is joining the International ATC Strike Club and will begin with industrial action, for two hours daily on: June 30th, and July 8th,15th, 22nd and 29th.

KCXO/Houston Regional will be opening a new customs facility mid July. KCXO serves the Metro-Houston area and is 46 miles outside of town. The new CBP facility adds more choice to international operators over the already saturated Houston area airports.

KZZZ/United States The U.S. Navy has scrubbed the planned military GPS interference testing across the U.S. Southwest that was supposed to happen this month.

LWSS/Skopje is implementing Free Route Airspace in the Skopje ACC above FL245, effective 23JUN. FRA is available H24 with DCT limit unlimited. The ATS network above FL245 is withdrawn. Additional info is available in the Republic of Macedonia AIP AMD 58/16. New RAD measures can be found in the increment file and will become part of Annex 4 on AIRAC 1608.

LWZZ/Macedonia Late on 20JUN, tens of thousands of anti-government protesters gathered in central Skopje, Macedonia’s capital, to conduct another demonstration. The protesters gathered outside the Special Prosecution building before then marching to the Ministry of Justice building, where they broke some of its windows and threw red paint at its exterior.

CYZZ/Canada has introduced “No Drone Zones” around airports that includes fines for offenders caught operating drones in the restricted areas. They are also drafting new legislation to strengthen rules regarding drone operations.

LEMD/Madrid may have industrial action on 28JUN, the Apron controllers are making noises about a strike. Not confirmed.

WAZZ/Indonesia FIR Ujung Pandang FIR has a couple of radar outages from 19-27JUN. Reroutes or delays are not likely, but strong potential for lower than optimum Flight Levels.

HECC/Cairo FIR If for some reason you are operating flights to or from Libya, then A: You’re probably not reading this bulletin carefully enough, and B: Be aware that you are required to obtain PPR from  Egypt via AFTN to HECAYNYX, at least 48 hours before the flight, in order to overfly Cairo FIR.

EGAA/Belfast ILS 25 out of service along with other ongoing runway and taxiway closures until 11AUG16. Please check EGAA NOTAM’s for specific closures.

EGLF/Farnborough Temporary restricted airspace will be in effect for the annual Farnborough Airshow 16-17JUL. AIC M 033/2016.

France The French authorities have extended the document checks at their borders, these measures will apply to all airports in France and also to Basel airport. Especially during the period of the European Football Championships, passengers travelling to/ from French airports are asked to ensure they have a valid identity document (passport or identity card) with them whilst travelling. A drivers license is not an acceptable document.

OEZZ/Saudi Arabia FIR is introducing new Navigation Charges on 01JUL. All the maths is here.

LSZA/Lugano will close 10-19OCT due to heavy maintenance work on the main runway. No traffic will be able to operate. The airport operator has said 20OCT should be the reopening day but risk that this may be extended.

WMZZ/Malaysia Following a directive by the Malaysian Immigration Department, all foreign nationals travelling on all domestic flights will be required to produce passports upon passing through Immigration control, effective immediately.

Azerbaijan An online e-visa issuing system, called ASAN Visa, will be established that should streamline the visa application process. Eligible foreign nationals will be able to obtain supporting documents, submit their visa applications and receive an e-visa within three days of submission through the portal. The list of eligible nationals is expected to be available soon on the Foreign Ministry website.

EGPK/Prestwick has ongoing overnight closures due to ATC staffing problems, keep an eye on NOTAMs.

EIDW/Dublin will closed for 15 minutes at 1500Z on 23JUN due to a VIP departure.

NWWW/New Caledonia The South Pacific is not exempt from ATC strikes either; overnight closure of the NWWW airspace means no enroute traffic accepted in the FIR tonight – and sporadically ongoing. Note that the Fire Service also has reduced RFF category at specific times. Check Notams.

SKED/Bogota FIR NOTAM of the month award: Colombia Notam A1947 issued on 17JUN. Be aware of the potential for your Cabin Crew to request a change to the SID from ATC, unbeknownst to you. In full: “CHANGES TO STANDAR (sic) INSTRUMENT DEPARTURE (SID) COULD BE DONE BY RADIOTELEPHONY BETWEEN CABIN CREW AND THE CORRESPONDING ATS DEPARTMENT WHILE COMMUNICATION INTERCHANGE, IN ACCORDANCE WITH AERODROME OPERATIONS REF. AIP ENR 1.10”.

We actually have no idea what they mean. Let us know, and keep an eye out for those sneaky flight attendants.

LEPA/Palma has a bunch of outages, and runway and taxiway closures at present that will create restrictions and delays. Take a close look at your arrival and dep times before operating.

Suriname Immunisation checks for Yellow Fever are being carried out throughout June at all border check points, ports and international airports in Suriname; make sure you have a valid yellow fever certificate if required.

RJZZ/Japan On 22JUN heavy rains caused building damage and fatalities in southwestern Japan. At least six people died, as a result of the rain and mudslides across the island of Kyushu. Emergency personnel evacuated several hundred people due to the threat of further mudslides.

Uzbekistan has increased security due to a major summit, from 23-34JUN which may result in changes to flight departures and lengthy check in and security clearance at airports across the county.