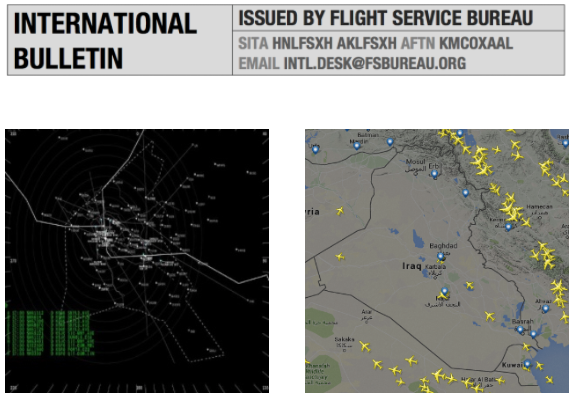 Iraq closes airspace in Kurdish North below FL300 06DEC  Iraq issued a new Notam on 06DEC warning of further Cruise Missile operations below FL310. ORBB A0423/15 states that “Flights operating at FL310 or above, and flights operating at ORBI, ORNI and ORMM are not affected”. You can read the full Notam here.

OIIX/Tehran FIR German Authorities published a new Notam last week warning of a risk to flight for aircraft operating in the vicinity of OITT/Tabriz, OITL/Ardabil, and OIGG/Rasht. DFS, the German ATC agency, recommends overflying this general region at FL260 or higher. A6875/15.

Russia/Turkey Effective 01DEC, Direct non-scheduled flights between Russia and Turkey are banned by decree of the President of the Russian Federation dated 28NOV. Prohibited for all airlines, regardless of the country of aircraft’s registration .

VOMM/Chennai Re-opened for 24-hour domestic and international flight operations today, five days after it was shut due to flooding.

EGGX/Shanwick As of 07DEC, although system testing and acceptance is reportedly finished, no RLAT/Reduced Lateral Separation tracks have yet been published by Shanwick or Gander for the daily OTS. It appears uncertain what the first day of operation will be.

MUHA/Havana, Cuba Hotel Capacity in Havana is under severe strain at present. With increased traffic to Cuba, finding a hotel room is now a regular challenge. Some airline crews have had to be accommodated in Varadero instead, as there were no hotel rooms left in the city. Book well in advance, where possible.

OMxx/United Arab Emirates It has been advised to us, that the requirement for TCAS 7.1 also applies to the Emirates FIR. All aircraft arrivals/departures or those transiting UAE airspace from 01DEC must be 7.1 compliant, or a re-route around UAE airspace will be required. Another option is to obtain a special dispensation to operate, this is available from GCAA in AUH, but is reportedly difficult to obtain. For more details please see the UAE AIP ‘Gen 1.5.6.6 Carriage of ACAS-II’.

LIxx/Italy Ongoing volcanic emission from Mt. Etna may disrupt routings through Italian Airspace. Please check the Toulouse VAAC for the most up to date info.

ESxx/Sweden have been forced to suspend, with immediate effect, flights from northern Iraq to Sweden following a directive from the Swedish Transport Agency (Transportstyrelsen). In a statement issued last week, Transportstyrelsen said the increased military activity across northern Iraq posed a threat to civilian flights thus warranting a ban.

VTxx/Thailand The FAA has downgraded Thailand to a Category 2 after an audit of the country’s Department of Civil Aviation (DCA) in October showed continued non-compliance with International Civil Aviation Organization (ICAO) safety standards. The FAA’s move comes five months after the ICAO formally instituted a Serious Safety Concern (SSC) against Thailand for failure to adequately address shortcomings identified during a Universal Safety Oversight Audit Programme (USOAP) inspection in January.

MUxx/CUBA Will be reinstating travel permits for doctors. On 01DEC, Cuba announced that it was reinstating the travel restrictions it had previously imposed on doctors, which requires doctors to obtain permission before leaving the country. The restriction had been lifted in 2013, but is now being re-imposed, as the government claims that its universal and free health care services are being “seriously affected” by the number of doctors leaving the country.

Zxxx/China will mandate that its air traffic controllers use only English when communicating with pilots of any airline starting in 2017, according to the Civil Aviation Administration of China (CAAC). The move will improve situational awareness for foreign pilots. Currently, ATC at all airports across China use English to communicate with pilots of foreign airlines and Mandarin with those flying for Chinese carriers. The CAAC will announce the exact date for implementation later, ensuring the readiness of all stakeholders involved in the process.

ZUUU/Chengdu has completed the on going construction work. The parking bay has been released and is available on a first come, first serve basis. This applies to overnighting aircraft as well.