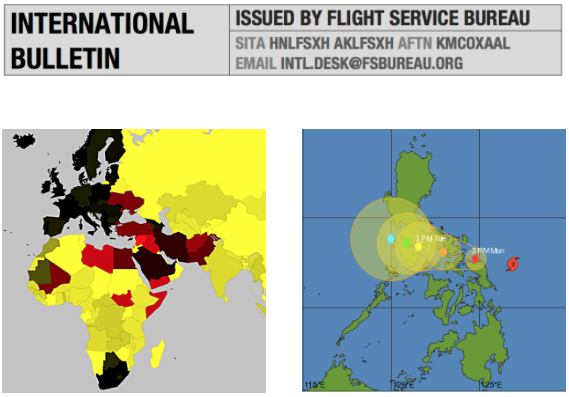 
New Overflight Map 14DEC The Airline Cooperative and Flight Service Bureau have finalised the initial version of an online Overflight Permit and Security Map, showing current airspace and security warnings worldwide, together with county by country information on permit requirements. The map is available ot all AO’s at fsbureau.org/map. Read more below.

Typhoon Melor affecting the Philippines 14DEC the center of Typhoon Melor is forecast to move into the central Philippines (near southeastern Luzon) Monday evening local time as the equivalent of a Category 4 hurricane. The current forecast path indicates the Typhoon moving inland towards Legazpi City, Sorsogon City and Gubat are some of the locations. For more details visit the Joint Typhoon Warning Center (JTWC).

EGGX/Shanwick/CZQX/Gander The technical issues affecting the implementation of the RLAT/Reduced Lateral Separation tracks have reportedly been finally resolved and the first publication of the “Half Tracks” is now scheduled for today, 14DEC2015.

LFRR/Brest FIR Most sectors regulated day and night due to new software (ERATO) implementation. High delays. The worst delays are in the following sectors: LFRMZSI, LFRJ, LFRN, LFRVKWS. German departures to USA are advised to consider routing North of Brest airspace via NIK (or North of).

OAKN/Kandahar A Taliban attack took place at the airport on 08DEC, with close to 50 fatalities. The attack was a major security breach, as heavily armed militants were able to enter a fortified area supposed to have been made secure by the Afghan National Security Forces (ANSF).

The ICAO Council adopted a new tracking standard for certain international flights that requires crews to report their aircraft’s positions at least every 15 minutes. It will become effective in March 2016 and applicable 08NOV2018. The new requirement also will be formalized as Amendment 39 to Annex 6—Operation of Aircraft, Part I. Only aircraft with a maximum takeoff weight of more than 59,000 pounds and a passenger seating capacity of more than 19 are affected by the rule. Also, the requirement applies to over oceanic and other remote areas, and where air traffic service is obtaining position information greater than 15-minute intervals.

Central/South America On 10DEC2015, the U.S. Centers for Disease Control and Prevention (CDC) issued a Level 1 Travel Warning for Mexico, El Salvador, Guatemala, Panama, Brazil, Columbia, Paraguay, Suriname and Venezuela, advising travelers to protect themselves against the Zika Virus. Zika is a viral disease transmitted by the Aedes aegypti mosquito, which also carries the dengue and chikungunya viruses.

Kxxx/United States The U.S. House of Representatives voted in support of a measure to tighten control on the Visa Waiver Program, which allows travelers of certain nationalities to enter the U.S. without a visa. Under the new measure, the U.S. will now require visas for anyone who has traveled to Iraq or Syria in the past five years. The measure requires that all countries participating in the visa waiver program share intelligence with the U.S. regarding possible extremists.

Zxxx/China Chinese officials lifted a red alert they had put in place on 7 December after heavy smog greatly reduced visibility throughout the city and increased health risks for anyone venturing outdoors. The smog was so heavy it affected operations at nearby airports.  Heavy smog is an annual occurrence in northeast China, and the problem is most severe during the winter months, when the morning fog becomes dense and power plants run at a higher rate to produce electricity for in-home heating. Because of this, you should expect similar alerts to be issued periodically throughout the remainder of the winter.

Cxxx/Canada Nav Canada has issued AIC 30/15 which addresses a proposal for amendment to the International Civil Aviation Organization (ICAO) Global Operational Data Link Document (GOLD) to optimize high frequency (HF) radiotelephony use in the North Atlantic (NAT) Region. The change eliminates NAT Region specific RT phraseology that has been made redundant with the availability of flight data to radio operators.

HCMM/Mogadishu Aden Adden, Somalia On the evening of 13DEC2015, African Union (AU) peacekeepers thwarted a suspected al-Shabaab attack on the Airport. The assailants, who were on speedboats, reportedly attempted to stage a seaborne attack on the facility. Heavy gunfire was reported throughout the encounter. Aden Adde International Airport has not been operational during nighttime hours since 1991. Currently, the airport and its compound host foreign embassies and delegates.