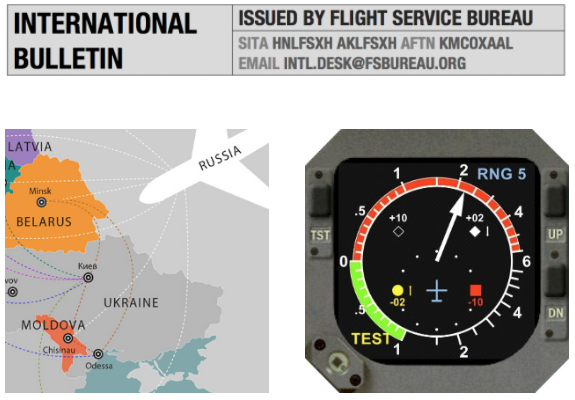 
All Russian overflights of Ukraine now prohibited 29NOV In a development of the dispute between Russia and Ukraine regarding traffic between the two countries, Ukraine has extended the original ban (which affected specific Russian Airline only) to all Russian registered Aircraft Operators. Notam 2604/15 issued last Wednesday has the specifics.

EUR: TCAS 7.1 Compulsary 01DEC The EASA Mandate for compulsary carriage of TCAS version 7.1 (with changes to “Adjust Vertical Speed” RA and resolution of “Reversal RA” problems) is 01DEC. All operators must have 7.1 on board. Note that this applies also to EU Territories abroad, eg. New Caledonia, Tahiti.

OYSC/Sanaa FIR We’ve received input from a number of US Airlines that although Yemeni landmass airspace is prohibited, operations through the OYSC/Sanaa FIR Oceanic portion are available in accordance with FDC5/5575.

NZAA/Auckland is closed every Monday morning 0130-0430LT for runway maintenance. However, Robin Leach at Air Centre One notes that several aircraft have departed for Auckland with an arrival time during this period resulting in airborne holding. Part of the issue is that a NOTAM is only issued if the work is cancelled; otherwise the (hard to spot) AIP/IFG notes for Auckland apply.

ZBAA/Beijing Chinese Authorities have issued an ‘orange level’ alert for smog on Sunday, with reports that visibility in places is down to a few hundred feet. This alert requires industrial plants to reduce or shut down production. With the current temperatures, Freezing Fog is affecting operations at Beijing Airports.

North Atlantic First day with the new NAT Tracks structure will be 01DEC per advice from NATS and Nav Canada, reporting that previous IT issues with the new tracks have been resolved.

Spain The National AFTN COM Centre is out of action for a few hours on Monday night (after 2100Z), meaning that FPL filing and other AFTN based messaging will be affected for Airports in Spain and the Canary Islands.

Bermuda Transatlantic Operators should note in addition to the new track structure on 01DEC, that Bermuda will be without radar coverage for the afternoon (1200Z-1600Z), and the National Authority there is recommending to avoid Bermuda airspace. A limited non-radar service will be provided, and only airways L459, 461, and 462 are useable if you do overfly. Refer to KZWY A0461/15 for more.

EGLL/London Heathrow has a high risk of regulation for Mon, Nov 30th from 0540-2200Z due to strong winds. Please plan fuel accordingly for possible airborne delays.

HLLL/Libya FIR Due to the recent escalation of the Libyan Crisis all Italian aircraft operators have been prohibited from flying through HLLL FIR. Prior Permission to operate into HL available aerodromes also requires Prior Permission by the Libyan CAA. REF NOTAM A8382/15 which replaced A5637/15.

LFRR/Brest FIR Training and stepped implementation of the ERATO paperless strip system in Brest FIR commenced on 24NOV and will last until 18DEC with significant capacity reductions. A transition period with capacity reductions will follow from 19DEC; this may potentially extend into Summer 2016. Moderate and (in some case) high delays may be expected daily, depending on the sector configuration provided.

LTxx/Turkey In response to the downing of a Russian Fighter Jet, Russia will be suspending the Visa-Free Travel program between the countries effective 01JAN2016.

VICG/Changigarh The new Chandigarh international airport which was originally scheduled to close for runway resurfacing which was estimated to take approx a year will in fact now remain open during the construction. Work to resurface the runway will take place without disturbing the flight operations there.

EIDW/Dublin The DAA and IAA are currently exploring a further reduction in SID separation to 75 seconds (following aircraft given take-off clearance when preceding aircraft reaches 1NM past DER). Ongoing AIM is to reduce further to 60 seconds if possible.

FQNC/Nacala,Mozambique Mozambique’s airport management company AdM stated on 24 November 2015 that Nacala Airport is expected to receive the proper certification to service international flights by December 2015. International airlines can begin using the facility by March or April 2016. Nacala Airport was a former military airbase and it opened as a civilian facility in December 2014. However, to date, the airport has only been permitted to service domestic flights.