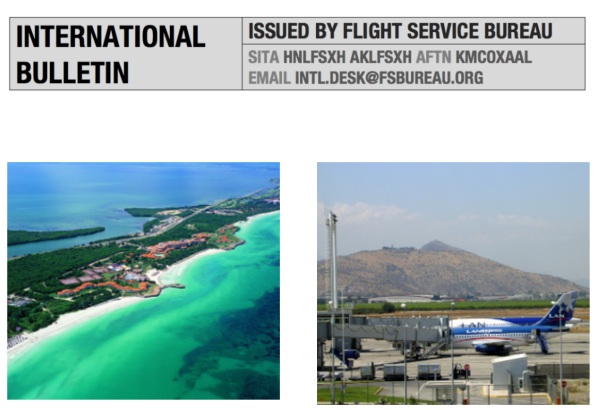 
Cuba Travel opening up 21DEC Negotiations between the USA and Cuba on scheduled air services between the two countries are progressing at pace; meaning that we expect to see sanctions on private US Tourism Travel lifted as early as next March. See more below.

Chile Airport Strike ends 21DEC A four day strike was ended yesterday 20DEC in Chile by the Trade Union, as 3000 Airport workers across the country responded to the governments rejection of a pension plan. Several hundred flights were cancelled. Non-scheduled operations were largely unaffected, but the risk of further action remains.

HUEC/Entebbe ACC, Uganda. ATC in Uganda is reporting a significant increase in the number of flights entering their airspace without prior coordination from Sudan and Congo (Khartoum and Kinshasa FIRs). Regional ATC in Africa is known to be challenging, but this warning deserves attention. Crews should make all efforts to contact each FIR 10 mins in advance – HF 11300, or relay on 126.9 if unable.

KZMA/Miami FIR SpaceX announced Sunday it has pushed back its planned launch of a Falcon 9 rocket with 11 communications satellites to 2033 ET Monday. KZMA has issued NOTAM A1357/15 for launch. It will also affect the KZJX Jacksonville FIR and TJZS San Juan FIR. The FAA will also issue tactical advisories regarding the launch and will most likely restrict operation on AR6 and AR15.

EGGX/Shanwick have issued a reminder to flights operating on the “Tango Routes” (T9, T16, T213) that HF in all cases is required to operate here, and crews should be trained in the procedures. Request OCA Clearance 50 mins in advance. Primary/Secondary HF freqs: Southbound 6547/8879, Northbound 8879/6547.

LIPH/Treviso Fuel spillage on the runway has closed the airport until 1700Z today 21DEC.

Cuba and USA Reports in the international media last week indicated that an agreement between Cuba and the US is likely to be signed early next year, allowing up to 110 scheduled flights: 20 to Havana, 10 to each of the other 9 international airports in Cuba. At present, US visitors must still fall in to one of the 12 official categories for authorised travel; however, once scheduled services are in place, we anticipate this to be the leverage to remove the final hurdle for US citizens – visiting Cuba for tourism. The first flights will likely operate in early March.

It should be noted that there are no restrictions on the Cuban side. US Aircraft can land in Havana with a routine Landing Permit issued by IACC, and US Aircraft can overfly with a routine Overflight permit. We anticipate that the requirement for a permit will stay in place as this is routine in most Latin American countries, primarily to check Navigation Fee debts and Operator Profile.

Haiti On 19DEC, election-related demonstrations across Haiti turned violent amid accusations of electoral fraud. Violent clashes led to the burning of several government buildings. Haitian police officers stated that they were trying to restore security to the country.

PAZA/Anchorage ARTCC has a number of new procedures and systems in place effective 17DEC, including 30/30 RNP4 separation, an update to the Track Advisory program for westbound Russian Tracks, and standard routings. Check the current PAZA NOTAMs for complete information.

ZBAA/Beijing authorities have issued a red alert for high levels of air pollution and reduced visibility. The alert will be effective until 22DEC. According to China’s National Meteorological Center, air pollution levels are forecast to be slightly higher than those recorded from 06-09DEC.

EGLL/EGKK London Heathrow/Gatwick Airport train links will be disrupted over Christmas. The Gatwick Express trains will stop running for 10 days due to engineering works, with the last service of 2015 leaving Victoria station at 9.15pm on Christmas Eve and the first services of 2016 scheduled for 4 January. At Heathrow, the usual one-day closure on Christmas Day will be extended by three days. Neither Heathrow Express nor Heathrow Connect trains will run from London Paddington station during the period.

UBxx/Azerbaijan will become part of the IFPS (Integrated Flight Plan System) zone as of AIRAC 1601 on 07JAN2016. Azerbaijan will delegate responsibility for the provision of flight planning services for IFR/GAT flights within the Baku FIR to the Network Manager’s Integrated Initial Flight Plan Processing System. For more info see Azerbaijan AIC 01/2016 Series A, AIP ENR 1.10, AIP ENR 1.11 and NOTAM A0126/15.

UHPP/Petropavlovsk FIR Volcano Karmsky has recently been active with ash reported up to 15,000 ft and possibly affecting ops on R220. Please check for the latest Tokyo VAAC advisories.

The ICAO Council adopted a new tracking standard for certain international flights that requires crews to report their aircraft’s positions at least every 15 minutes. It will become effective in March 2016 and applicable 08NOV2018. The new requirement also will be formalized as Amendment 39 to Annex 6—Operation of Aircraft, Part I. Only aircraft with a maximum takeoff weight of more than 59,000 pounds and a passenger seating capacity of more than 19 are affected by the rule. Also, the requirement applies to over oceanic and other remote areas, and where air traffic service is obtaining position information greater than 15-minute intervals.

Christmas and New Years closures. Check opening times carefully during the next 2 weeks, as many major airports and FBO’s have closures, especially on 24, 25, 26DEC and 31DEC/01JAN.