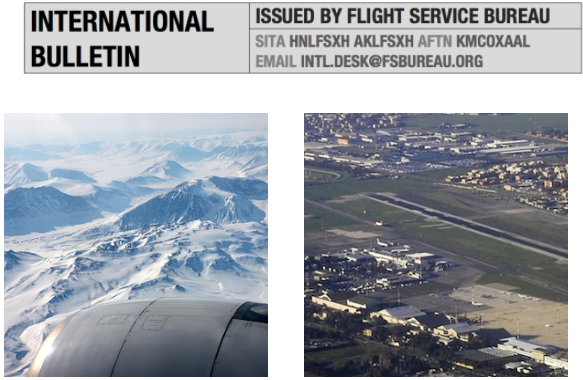 
Oceanic and remote procedures updated: 12OCT The FAA this week issued a significantly updated version of their “Oceanic and Remote Airspace” procedures document. There’s a lot of good stuff here, even if you’re not operating an N-reg. Take a look at the PDF.

Rome Airport to close Friday 12OCT A reminder that LIRA/Rome Ciampino will close fully from Friday, for two weeks, as a result of urgently required runway maintenance. You can use LIRF/Fiumicino instead, but with significant restrictions.

TXKF/Bermuda Tropical Storm Nicole is approaching, expect some disruption and check before using as an alternate over the next few days.

HAZZ/Ethiopia The Ethiopian government has declared a six month State of Emergency from 9 October 2016. While details of emergency arrangements are not formalised, measures to restrict communication, movement and political expression are expected. Carry identification, avoid all large gatherings and protests, monitor the media for details on the application of the State of Emergency and follow all instructions issued by local authorities.

SPIM/Lima radar will be off the air on Friday from 19-21Z for repairs, procedural control, expect enroute delays.

EGGX/Shanwick. An exercise to test to the Volcano eruption response is underway, you may see multiple references to an eruption in Iceland – it hasn’t happened, it’s just a test. Stand down. Katla is also back to code Green.

UZZZ/Russia Karymsky volcano in the Kamchatka peninsula is active with colour code Orange, check before operating.

OKAX/Kabul FIR continues to have comms issues in the north east portion of Afghanistan airspace, VHF comms are not working on 118.3 or 128.5. There are some “Nordo” procedures, refer to AIP ENR 1.6-1.

MUFH/Havana has a couple of new entry points to the FIR – FUNDI and IKBIX – but they’re not for use yet, so don’t.

OPRN/Islamabad If operating to OPRN, be aware that on Saturdays and Mondays ATC will be practising non-radar procedural approach from 0500-0900Z until the end of the year.

SPJC/Lima has overnight parking restrictions from 14-21NOV, check with Airport company or handler prior to operating.

FZZZ/Democratic Republic of the Congo: the security picture is uncertain following recent political protests and there have been calls for further protests in Kinshasa, including on 19 October; you should follow travel advice and monitor local media for updates

SPZO/Cusco will not allow overnight parking from 10-20OCT.

FOZZ/Gabon Following the results of recent elections in Gabon, further strikes or demonstrations could occur in the capital Libreville and in Port Gentil. Avoid demonstrations, large crowds and rallies as they may turn violent.

UAZZ/Kyrgyz Republic Multiple embassies located in Bishkek have issued warnings to their citizens of an increased threat of a terrorist attack in the Kyrgyz Republic, possibly involving kidnapping and hostage taking, against Kyrgyz authorities and foreign diplomats during October 2016.

TQPF/Anguilla has introduced a ban on visitors from Guinea, Liberia and Sierra Leone, with a view to mitigating Ebola risk. Anyone who has been to those three countries in the last 21 days will not be allowed to enter.

VTSP/Phuket is suffering from ramp congestion, and will not allow non-scheduled flights to stay overnight until the end of the year.

WSSS/Singapore Changi has a couple of closures on 18 and 19 OCT due to a military exercise, check local Notams.