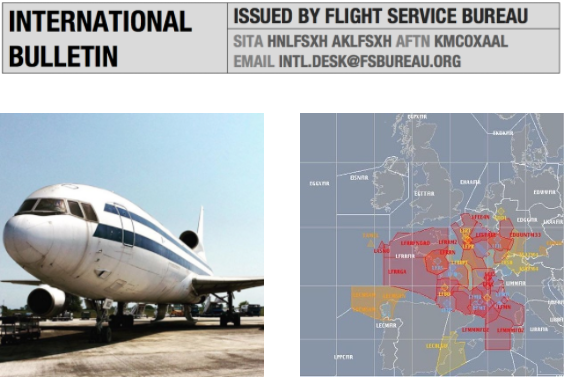 
EASA Updates ‘Suspect Aircraft’ Guidelines 01JUN EASA has published new guidelines for inspectors to assess which aircraft should be prioritised for SAFA ramp checks in Europe and SAFA compliant states. Read the article.

8th French ATC strike this weekend 01JUN Notification has been given by French ATC Unions of a Three Day Strike this coming weekend from Friday-Monday, starting at 0400Z Friday 03JUN. Read the article.

CYMM/Fort McMurray is scheduled to reopen 10JUN to regular commercial operations. The airport has been closed to normal traffic due to a significant forest fire.

MMAA/Acapulco after an outage lasting several years the ILS for RWY 10/28 is operational again.

KSEA/Seattle has runway 16C/34C closed until 27JUN for repairs. ATC initiatives possible through the construction.

EINN/Shannon and EICK/Cork will be testing a new “Remote Tower” system from 06JUN until September, where at quieter times the controller in Dublin will provide the ATC service to flights at Shannon and Cork. The IAA says airspace users will not notice the change. We think you might.

VOTP/Tirupati will begin International operations beginning the end of June with flights to the U.S. The airport had recently upgraded their customs systems and other procedures.

LZZZ/Mediterranean Despite some reports, NATO operations in Libya appear unlikely. There are several new airspace NOTAMs, but is anyone still flying to Libya?

LFZZ/France due to ongoing protests at french oil refineries and fuel shortages the French CAA has advised to tanker in as much fuel as possible to help mitigate any issues. Please check with local handlers for any specific fuel constraints.

SPZZ/Ecuador Volcano Sangay is producing ash that extends up to 20,000 feet. Movement is towards the west at 10 knots. Please check with the Washington VAAC for the latest advisories.

LLBG/Tel Aviv, Israel On 26-27MAY strike action in the form of a work go-slow took place.The slowdown has primarily affected outgoing flights by increasing the time between takeoffs, but it has been reported that if the slowdown continues it will begin to affect incoming flights.

NVZZ/Vanuatu 27MAY a 5.0 magnitude earthquake struck west of Vanuatu. The quake was centered approximately 60 mi/95 km northwest of Port Vila and was measured at a depth of about 6 mi/10 km. No tsunami warning has been issued.

DAZZ/Algeria At 0054 local time (2354 UTC) on 28MAY, a magnitude 5.2 earthquake struck approximately 35 mi/55 km southeast of Algiers, the capital of Algeria. The epicenter of the earthquake registered a depth of approximately 7 mi/ 12 km. Following the quake, there were no reports of injuries or damage.

FNZZ/Angola A yellow fever outbreak has caused 301 deaths so far this year. The number of suspected cases is 2,536. The outbreak began in Luanda and has since spread to areas throughout the country, particularly along the coast and in the central regions, despite a large-scale vaccination program.

VDPP/Cambodia Political tensions are high in Cambodia following contested national elections in 2013. Arrest warrants have been issued for the leaders of the opposition CNRP party and the situation is unpredictable. On 30 May police blocked roads in southern Phnom Penh to prevent opposition CNRP supporters from carrying out a planned protest march. Further disruption is possible if the remaining leader is arrested. The opposition party has announced it will hold mass, non-violent, demonstrations and a number of unions have said they will strike in support.

LFZZ/France Despite recent strikes, the French government has stated it will not back down from labor reforms despite street protests and refinery blockades. The CGT Union has threatened to disrupt the upcoming Euro 2016 soccer tournament if the government does not back down; however, after meeting with representatives of the oil industry, government officials stated that the situation at fuel depots is improving.

Ramadan starts on 06JUN, for one month. If you are operating to any Islamic countries, expect the usual slowdown in work, longer processing times for permits, and closures.

OEZZ/Saudi FIR Saudi Arabia has intercepted a ballistic missile that was fired from Yemen, after which Saudi aircraft bombarded the missile’s platform. A Saudi official stated that the country may reconsider the kingdom’s truce with Yemen, as a result of the strike. The missile launch was the second strike in May.

RCZZ/Taiwan On 31MAY, a 6.1 magnitude earthquake struck approximately 70 mi/115 km northeast of Taipei. The quake was measured at a depth of about 150 mi/240 km. There were no reports of damage, and no tsunami warning was issued.

UKZZ/Ukraine On 29MAY, attacks by pro-Russian rebels in eastern Ukraine, violating the ceasefire signed in February 2015, killed five Ukrainian military officers and wounded four others. The latest attacks follow a 24 May report released by Ukrainian authorities, stating seven soldiers were killed on that day, making it the deadliest day for Ukrainian forces since August last year.

KZZZ/USA The State Dept has issued a warning to arriving travellers this summer to make sure that they have all necessary documents to enter the United States – there have been multiple changes to the rules this year (see Active Bulletins below for more on this).