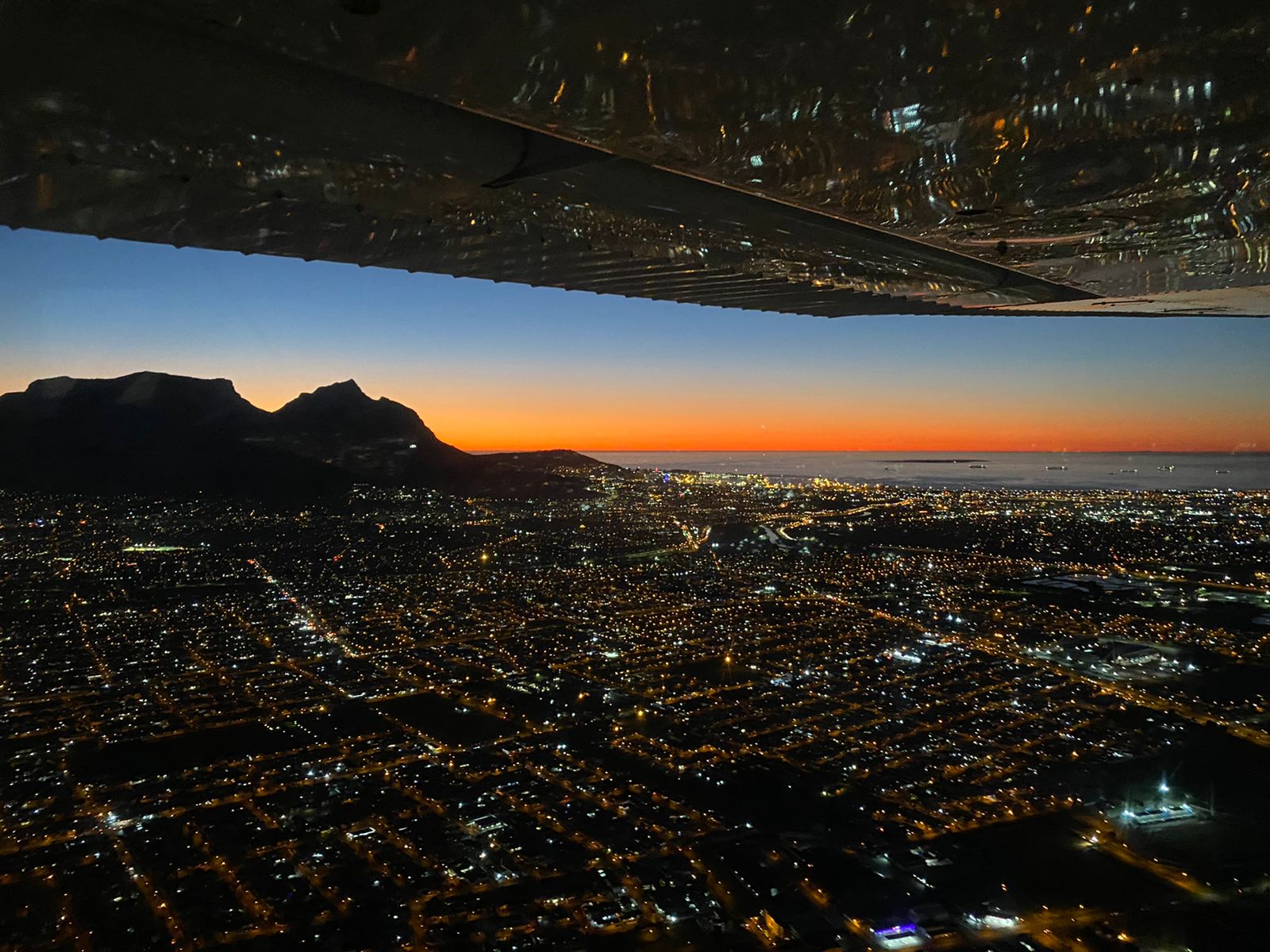 
Two South African airports have recently had their licences revoked.

Why has this happened and does it mean anything bigger for aviation, particularly commercial aviation, in South Africa?

Polokwane International Airport in the Limpopo Province had their airport status downgraded in April 2021, moving it from a Category 7 to Category 2 after the SACAA determined they were non-compliant in safety standards.

Category 2 means it is unable to provide the minimum level of emergency services required for commercial aircraft. FALA/Lanseria and FAOR/Johannesburg are now the closest major airports for this province. 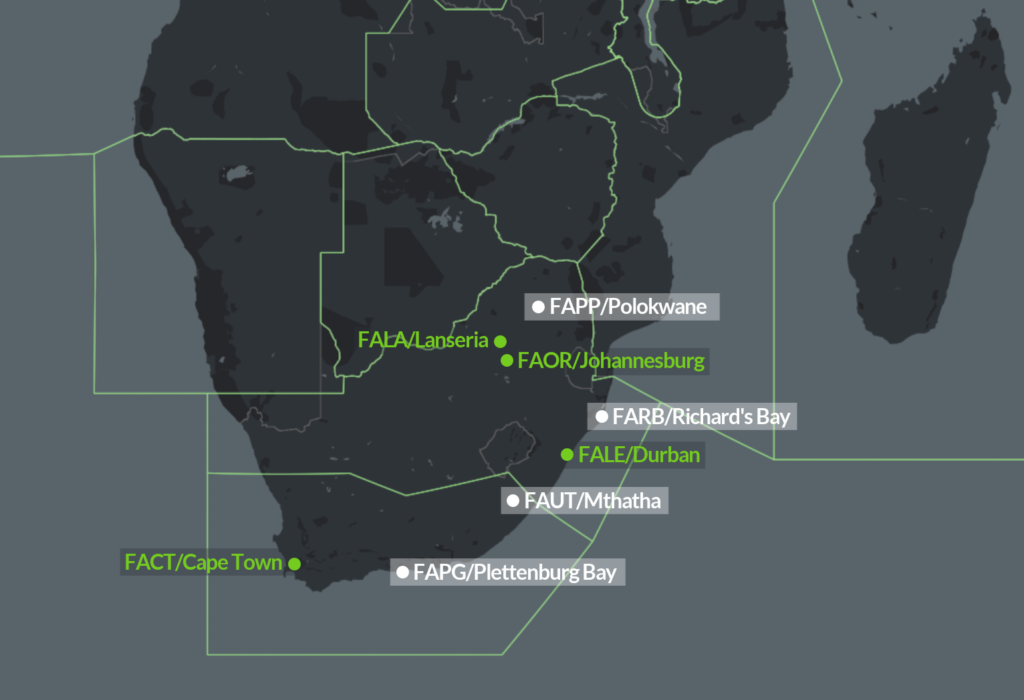 Plettenburg airport had their licence revoked August 2021, following a downgrade from category 4 to category 2, also due non-compliance with safety standards.

The municipal airport in Richard’s Bay lost its status in 2020 as the airport management company were unable to finance the necessary emergency and fire services to support commercial operations.

Mthatha airport (formerly Umtata) was downgraded in 2019 due a lack of emergency services and emergency systems which need technology upgrades.

What are the regulations?

The SACAA applies standard ICAO licensing requirements to their aerodromes. These are laid out in ICAO Annex 14 (Aerodrome Design and Operations), Doc 9774 (Manual on Certification of Aerodromes) and ICAO Annex 19 (Safety Management).

The oversight and ability of the authority to monitor is also monitored.

ICAO audit countries through the Universal Safety Oversight Audit Program (USOAP). It is a little less in-depth than the FAA’s IASA program (which recently saw Mexico downgraded) but looks at the “effective implementation of the critical elements of a safety oversight system and conducts a systematic and objective review of the State’s safety overs…. something something… implementation of ICAO SARPS, procedures and aviation safety best practices.”

Basically, is the authority checking everything is up to scratch in their region of jurisdiction, and if not, do they do something about it.

ICAO only have 8 countries red flagged. South Africa comes out pretty well in it. 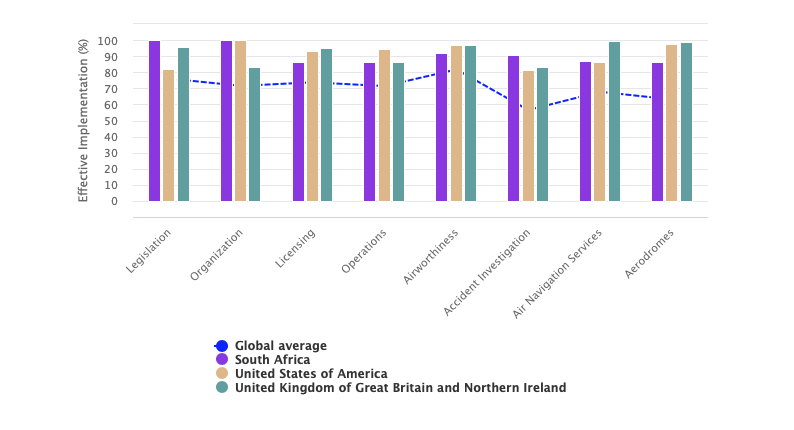 So the downgrades are necessary?

Unfortunately, yes, but it means a Catch 22 situation for these aerodromes because without traffic, they do not have the finances to improve their capability.

Aviation is a major contributor to the South African economy.

IATA published a report on aviation’s contribution to the South African economy (it is not clear when this was published). What is evident is South Africa is, like many countries, struggling with the Covid pandemic. The South African variant has seen them cut off to most of the rest of the world, and this is having a longer term impact on their aviation infrastructure. 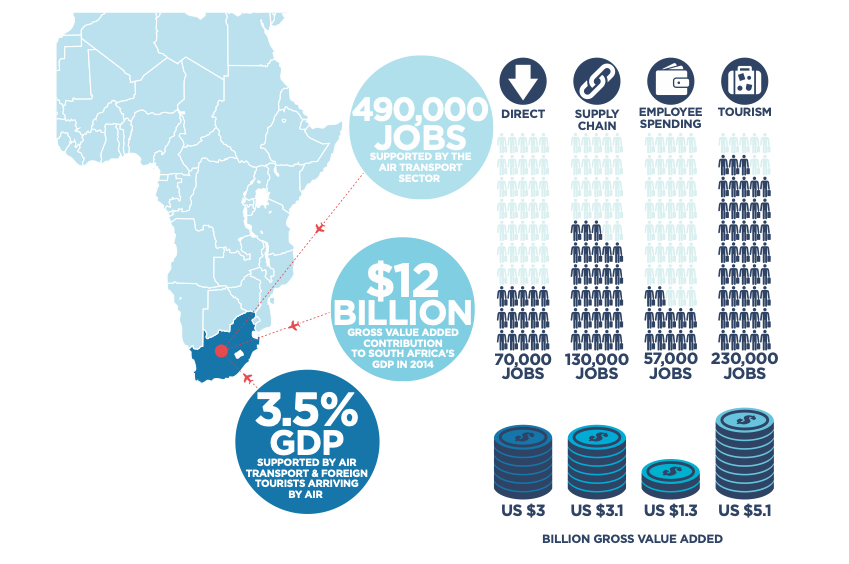 Nice infographic on the aviation contribution to their economy

The downgrading of airports unfortunately points at a lack of funding within the country. There are also questions of corruption within the government and the airport management companies. Whatever the reason, funds are not reaching (or are not available) to the airports which need investment, particularly those which do not not benefit from cash flow from international flight operations and so facilities and services are not being maintained.

In 2020, the SACAA released this (rather odd) statement regarding rumoured ILS issues across the country. It isn’t immediately clear why or where the rumour started from.

Cape Town’s RCLLs could apparently do with a clean…

The country is undergoing moderate levels of civil unrest and political divide. King Shaka airport was targeted in attacks in July 2021, and there do not seem to be signs of it improving in the near future.

South Africa is undergoing continuous load shedding due issues with their power supplier, ESKOM. The Airports Company South Africa (ACSA) confirmed however that all nine of its airports have the ability to operate on diesel generators covering essential loads for between 18 and 72 house – so load shedding should not impact their operations.

A NOTAM search brings up fuel issues at several airports, however, they are all small domestic ones –  FAEL, FAUT, FABE and FAUP

South Africa is, like many countries, struggling with the long term impact of the Covid pandemic. However, the standards at the major international airports remain good and the aviation infrastructure is still more than able to support international flight operations.

As the world reopens, hopefully the situation will improve. For now, all the global aviation industry can do is look to support countries like South Africa once they are able to again.