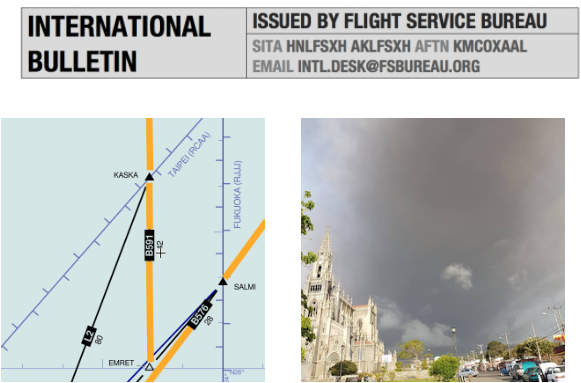 
Taiwan ADS-B requirement 21SEP Yesterday, Taiwan pushed the requirement for ADS-B above FL290 for all aircraft, back to 2020 – as a fast approaching deadline of December this year was looming. Read the article.

Costa Rica volcano 21SEP MROC/San Jose, Costa Rica has reopened after the eruption of the Turrialba volcano on Monday. A risk of further closures continues. Read the article.

OPZZ/Pakistan Some airspace in the north of the country (Kashmir region) has been closed by the Pakistan CAA. Details are unclear but reports indicate Gilgit, Skardu and Chitral Airports are affected by the closure.

BIKF/Keflavik Departing KEF eastbound? Icelandic ATC would love you to file the following as a standard route: PIXUM PETUX ORTAV ODPEX, or 63N022W CELLO if you’re planning to cross 10W at GOMUP or south of.

EDDL/Dusseldorf has closed 05L/23R for a couple of days to remove a WW2 bomb. Some delays at peak times may result.

HLGT/Ghat, Libya Three foreign nationals were kidnapped along the road that leads to Ghat Airport on 19SEP, located in the Fezzan province along the southwest border with Algeria. The foreigners were construction workers employed by the Italian-owned Conicos company to service Ghat Airport. There are numerous armed militia and terrorist groups active in the area and the foreigners were said to be operating under discretion due to the security risk.

EDHL/Lubeck will closed on Oct 4th for repairs – all day.

ENGM/Oslo will introduce new RNP AR approaches in November, available to all runways. Auth from Norwegian CAA is required to use them.

FKKD/Douala now requires PPR 72 hours prior arrival, for non-scheduled flights, due to upcoming space restrictions as a result of WIP. You can make requests directly to Airport admin at pce.douala@adcsa.aero.

GBZZ/Gambia In a change to procedure, Overflight Permits, and Landing Permits for traffic operating to GBYD/Banjul, are now issued by the Department of Flight Safety Standards at the GCAA.

HCMM/Mogadishu has issued a security reminder to operators: “OPERATORS SHOULD EXER EXTREME CTN AND FULLY ASSESS THE POTENTIAL FOR RISKS TO FLT SAFETY AND SECURITY WHEN PLANNING OR CONDUCTING OPS INTO MOGADISHU AIRPORT DUE TO LACK OF INFORMATION ON ARMED CONFLICT AND LACK OF AERONAUTICAL INFORMATION.”

FAZZ/South Africa The CAA has updated its warnings for operators, with new guidance for two airspace blocks: that affected by the Syrian conflict – namely Baghdad, Damascus, and Tehran FIRs; and that affected by recent concerns over the Northern Sinai – their advice is to overfly at FL260 or higher.

LMML/Malta airshow coming up on 24-25 Sept, multiple restrictions, check before operating or filing as alternate.

FZZZ/DRC Congo Since September 19 large-scale demonstrations have been resulting in violent clashes between demonstrators and security forces in Kinshasa and elsewhere in the country. The situation is particularly tense in Kinshasa where violence has caused casualties. These demonstrations could continue over the next few days and the situation could further degenerate. The sole road to the Kinshasa airport could be blocked and some flights have been cancelled.

OJZZ/Jordan It’s White Stork migration season, and Jordan has issued warnings for all of its airports, for crews to be mindful of the high chance of presence of large flocks of them on arrival and departure.

SKED/Bogota has some comms issues on north/south bound routes to Peru (Lima FIR); 10 minute separation is applied betwen aircraft on these routes until at least Sept 26th.

KZZZ/USA For some good reading, the FAA (thanks Andy for passing this on), have updated their Aviation Weather guidance doc. This is the first revision to the document since 1975.

Input: ATC, Pilots, Dispatchers: Any topical items that you think should be going out to the community? Let us know, and we’ll get your message out there. tellus@opsgroup.co.