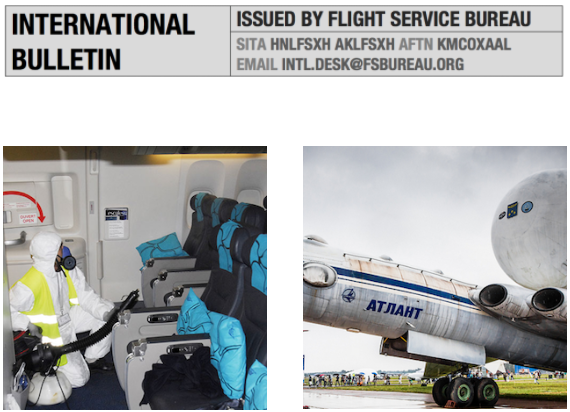 
Italy  now requiring Residual Disinsection 17FEB In light of the spreading global coverage of Zika Virus cases, countries are rapidly changing rules related to Quarantine and Health. Italy is now requiring residual aircraft disinsection for every aircraft coming from any area, not only Zika affected ones.

UUBW/Moscow Ramenskoye, which previously served as a military airfield, is scheduled to open to civilians as an International Airport on 15MAR2016. The airport will be Moscow’s fourth largest and is expected to serve approximately 1.9 million passengers per year. Russian Railways is planning on constructing a direct rail link between the facility and Moscow. Read the full article.

Worldwide As the mosquito-borne Zika virus spreads worldwide, some health and aviation authorities have begun targeting business aircraft to be treated with insecticide – similar to requirements that have been in place for commercial aircraft arriving from certain points of origin. The most prominent to date is Italy, which has reported several recent cases of the Zika virus affecting people who returned from trips to South America and the Caribbean. A “Certificate of Residual Disinsection” is now required for all aircraft operating in Italy, following recommended WHO and International Civil Aviation Organization Annex 9 procedures. Italy had originally limited the certificate requirement to aircraft arriving from Zika-affected countries, but “within 36 hours that changed” to all countries. Authorities in Costa Rica are requiring that aircraft arriving from affected countries be sprayed on arrival – with crew, passengers and luggage aboard – with an insecticide provided by the local agriculture department.

UADD/Taraz, Kazakhstan has been upgraded to RFF/Rescue Fire CAT9, and with regular international flights starting in June, should have customs available. Maybe become a useful Central Asian en-route alternate.

UKLV/Lviv FIR, Ukraine A new Notam (A0193/16) is issued to extend the ban in Ukrainian Airspace of any aircraft operator registered in the Russian Federation until 09MAY.

NZAA/Auckland Work is currently in progress on the threshold of RWY 23L with the threshold inset 2,270m.  The information is contained within AIP updates and not via NOTAM. Operators should note there is are no ILS approaches available at Auckland until 30MAR. While weather is usually very good during February and March operators can expect delays in poor wx.

NZQN/Queenstown is closed from 1800 each day until 31MAR for runway widening works.

AYPY/Port Moresby Telecoms outage continues. To contact ATC Centre
use (675) 325 8704 instead of published numbers. Multiple VHF freqs out of service, use HF 5565 as alternate.

RPHI/Manila has a radar outage on 18-19FEB meaning procedural control will affect the Luzon island area within the FIR, 10/15 minute enroute separation as standard.

Somalia A local terrorist organisation claimed responsibility for the bombing of a Daallo Airlines passenger aircraft on 02FEB shortly after it took off from Mogadishu’s Aden Adde International Airport (HCMM/MGO). The bombing forced the Airbus A321-111 to make an emergency landing at Mogadishu’s airport.

South Africa Refurbishment will affect Johannesburg’s OR Tambo International Airport (FAOR/JNB) beginning 13FEB when security and immigration will move from Terminal A to the Central Terminal. Slow processing expected until end March.

US and Cuba advance Air Service agreement US officials will travel to Havana to officially sign the agreement that will make the two countries a step closer for its first commercial flights. Once the  US-Cuba air travel pact that was agreed upon on 16DEC2015 will be finalized, airlines will have about two weeks to submit applications for US-Cuba routes with the US Department of Transport and get approval from Cuban authorities to obtain space at Cuban airports. Industry experts expect that the first Cuba-bound flights will be in the air sometime in 2016.