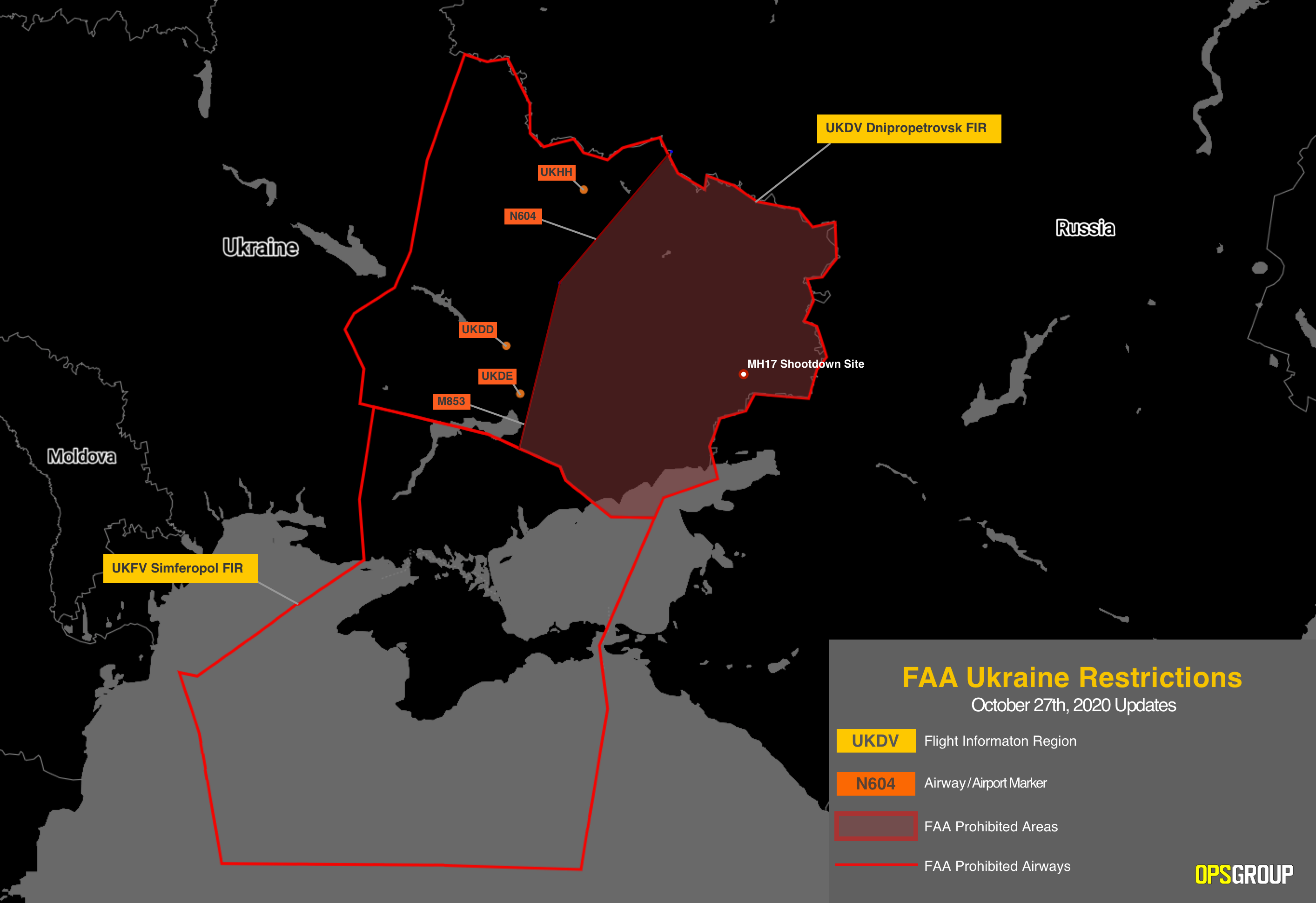 The US FAA has announced it will partially lift its airspace ban on Eastern Ukraine. In short (as our terrible title says) you can overfly Crimea without it being illegal in the eyes of the USA.

The re-issued Special Federal Aviation Regulation (SFAR) will extend the ban on flights in the eastern part of the UKDV/Dnipropetrovsk FIR for another year due to a continued threat of arms fire in the region. However, the FAA will entirely remove the restrictions on overflights of the UKFV/Simferopol FIR, as the security situation has sufficiently improved here.

The amended SFAR comes into force on October 27, 2020. Here’s our map detailing the new rule: 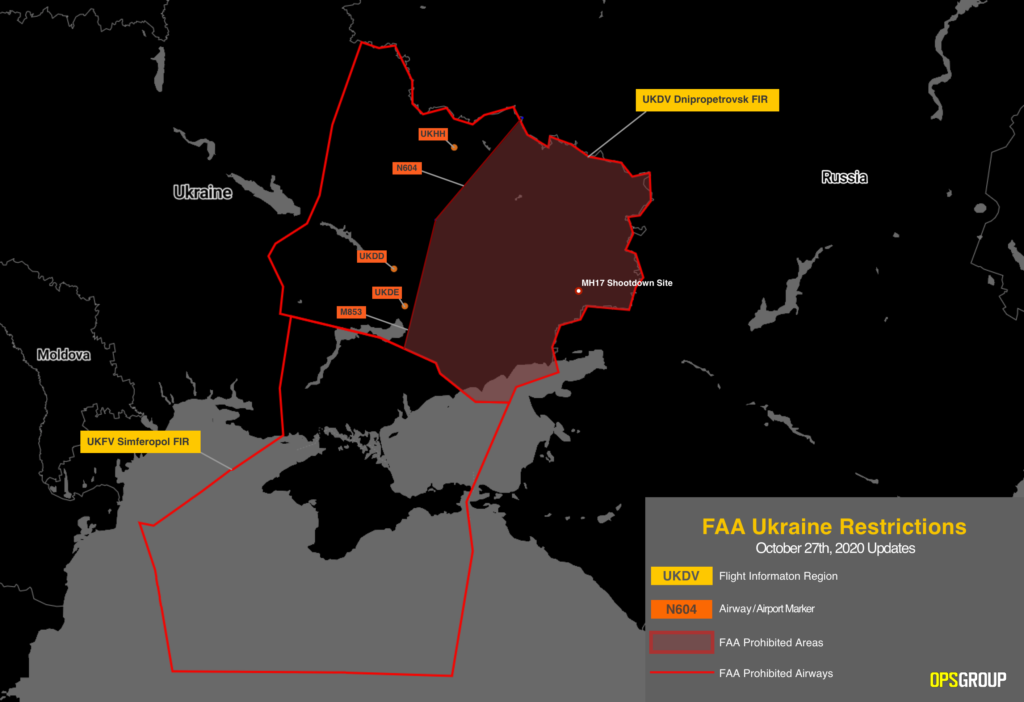 Back in 2014, the US brought out SFAR 113 which banned US operators from operations in Ukrainian airspace. This was in response to two separate issues:

2014 UKDV/Dnipropetrovsk FIR: Risk from arms fire
An ongoing war in the Donbass region in eastern Ukraine resulting in the shoot-down of MH17 led to the prohibition of operations over the region.

2014 UKFV/Simferopol FIR: Disputed Airspace
In 2014, Russia annexed Crimea and Ukraine disputed this. This resulted in a section of airspace with conflicting controllers and therefore a big risk to aircraft operating here receiving confusing and conflicting ATC instructions.

Jump forward to 2018 and the FAA amended their SFAR:

2018 UKDV/Dnipropetrovsk FIR
The FAA established that the western region of the UKDV FIR was generally safe and so aircraft were permitted to operate over certain areas, and to operate into three airports – UKHH, UKDD and UKDE.

However, the eastern side remained out of bounds due to continued hazards for aircraft. Namely, big ground to air weaponry, and no good procedures in place to mitigate against the risk of accidentally shooting down civilian aircraft.

2018 UKFV/Simferopol FIR
Due to an “overwhelming Russian presence”, particularly along the Crimean border, and a continued threat to flight operations due conflicting guidance, the restrictions in the Simferopol FIR remained in place, with an exception of airways over the Black Sea which were under the control of Ukrainian ATC.

Everything east of ABDAR – M853 – NIKAD – N604 – GOBUN is prohibited. Airways M853 and N604 are off-limits as well. Operations to UKHH/Kharkiv, UKDD/Dnipropetrovsk and UKDE/Zaporizhzhia airports are permitted.

Despite a ceasefire in 2019, some conflict-related airspace activity in the East has continued. In April 2020, Ukrainian forces shot down a Russian military UAV, and later that month an OSCE (Organisation for Security and Cooperation in Europe) monitoring mission UAV was shot down by small arms fire. There is also ongoing GPS jamming in this region.

While it is mostly stable, sudden attacks and skirmishes are still taking place, with little warning.

Therefore, the FAA has extended these restrictions until October 27, 2021.

2020 UKFV/Simferopol FIR
The FAA has determined that US civil aviation operations may resume safe operations in this area.

While Russia continues to assert territorial claims over this region, Ukraine has established appropriate risk management measures to ensure safe operations for aircraft along the Black Sea routes.

Ukraine has also “demonstrated a sustained commitment” to ensuring civil aircraft are protected from misidentification. There have been no clashes since the 2018 Kerch Strait maritime incident, and the Russian presence has greatly reduced, with Russian aggression in the region reducing to near zero levels.

In simple terms – as of 27th October 2020, the SFAR restrictions will not be renewed and US operators will be able to overfly the Simferopol FIR once more.

What are other countries saying about Ukraine?

Aside from the US, three other countries consistently publish airspace warnings: the UK, Germany, and France.

UK and France: both have warnings in place advising against all ops over both of these Ukrainian FIRs, with the exception of airways L851, M856, M860, and M854 in the UKFV/Simferopol FIR.

Germany: does not have any published warnings in place at all.

For the new US rule in full, click here.