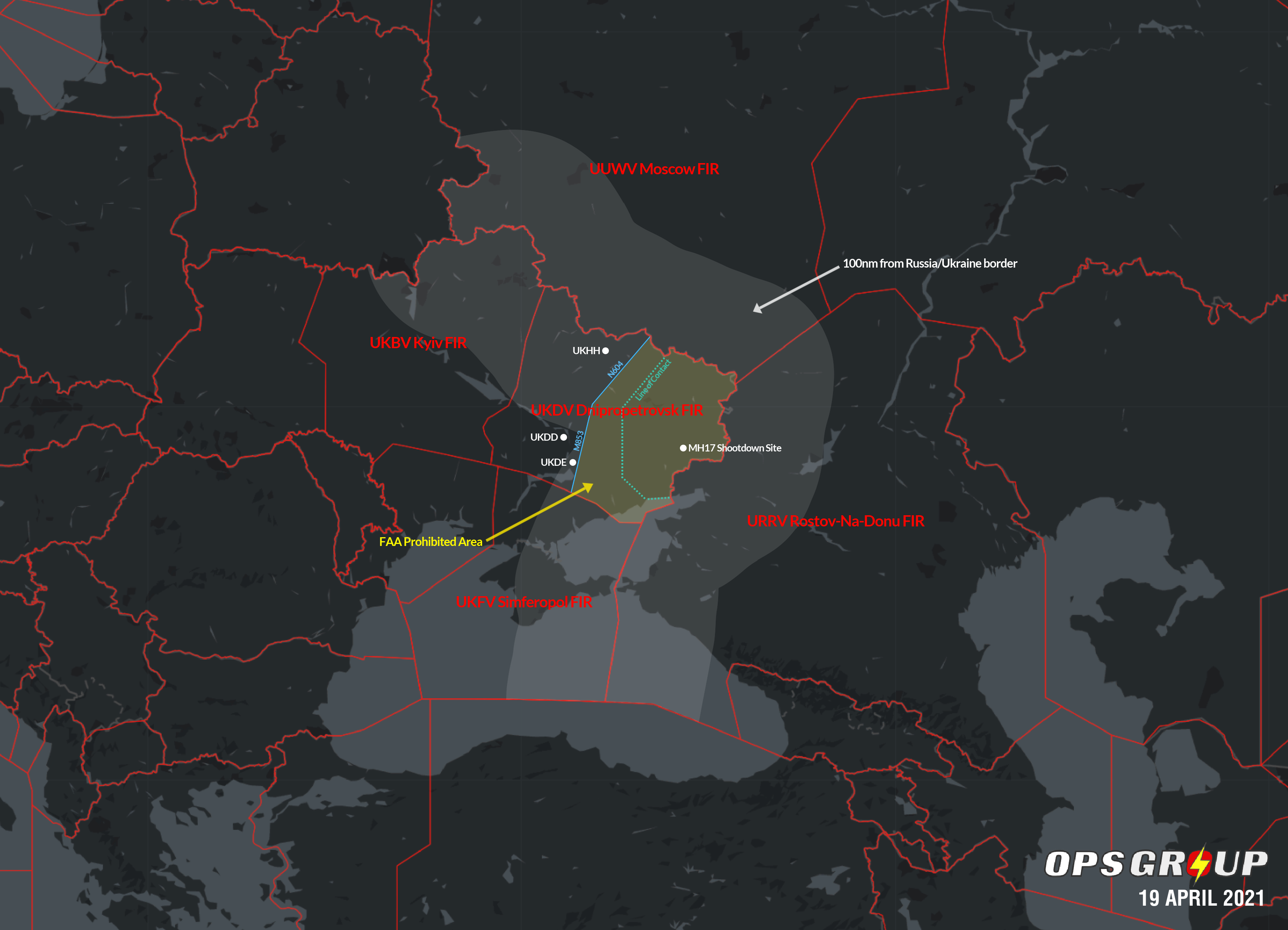 US FAA issues new airspace warning for Russia and Ukraine

US FAA issues new airspace warning for Russia and Ukraine


On April 17, the US FAA published new Notams warning operators to exercise extreme caution within 100nm of the entire Russia-Ukraine border, due to risks associated with recent increased tensions between the two countries. Should hostilities escalate here, the airspace on both sides could be exposed to potential weapons activity posing a risk to civil aircraft from misidentification or miscalculation.

The eastern part of Ukraine along the border with Russia is still an active conflict zone. The main hotspot is the Line of Contact which runs north-south through the UKDV/Dnipropetrovsk FIR. Throughout April 2021 there has been a large military build-up and an increase in ceasefire violations in this area, plus reports of GPS jamming and surveillance of civil flights by military systems – similar conditions to those prior to the shoot-down of MH17 in 2014.

This new airspace warning from the FAA follows the Information Note they published on April 13, which provides more background on the situation.

The FAA’s previous warning for Ukraine, as per SFAR 113, remains in place – US operators are banned from overflying the eastern part of the UKDV/Dnipropetrovsk FIR due to a continued threat of arms fire in the region. Essentially, everything east of ABDAR–M853–NIKAD–N604–GOBUN is prohibited. Airways M853 and N604 are off-limits as well. Flights to UKHH/Kharkiv, UKDD/Dnipropetrovsk and UKDE/Zaporizhzhia airports are permitted.

Put that all together – the old warning and the new one – and here’s how it looks: 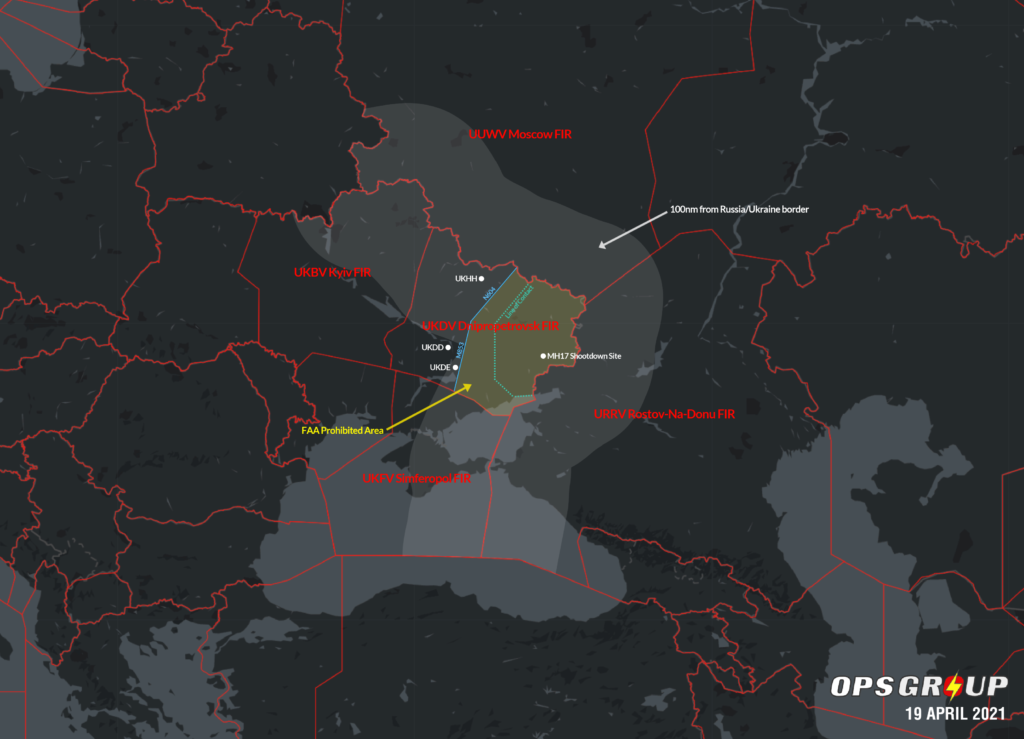 Several other countries have airspace warnings in place for eastern Ukraine, including Canada who recently published a Notam advising operators to avoid the UKFV/Simferopol and UKDV/Dnipropetrovsk FIRs due to the risk from heightened military activity and anti-aviation weaponry. Check SafeAirspace.net for more info.

What about the UKFV/Simferopol FIR?

For the past few years, the risk here has been quite separate to that affecting the UKDV/Dnipropetrovsk FIR. It stems from the fact that the UKFV/Simferopol is disputed airspace, with aircraft potentially receiving confusing and conflicting air traffic control instructions from both Ukrainian and Russian ATC.

In March 2014, Russia annexed Crimea, and Ukraine disputed this. The ATC Center is in Simferopol, Crimea, and is now run by Russia. Russia claims the airspace, and now refer to it as the URFV FIR. Ukraine refuses to recognise the change, and still calls it the UKFV FIR – and asks crews to talk to Ukrainian controllers in Dnipro/Odesa ACC instead of Simferopol ACC.

In October 2020, the US entirely removed their restrictions on overflights of the UKFV/Simferopol FIR, as they said the security situation had sufficiently improved here. While Russia continued to assert territorial claims over this region, Ukraine had established appropriate risk management measures to ensure safe operations for aircraft along the Black Sea routes.

In simple terms – since 27th October 2020, US operators have been able to overfly the Simferopol FIR.

However, tensions have been on the rise in this region throughout 2021. Russia seem to be going on a renewed military offensive here, focusing their efforts on the area of disputed airspace over Crimea, and establishing several large danger areas over the water surrounding the Crimea Peninsula at all flight levels. These danger areas are most likely due to military activity which may include live firing exercises –  so use extreme care in the UKFV/Simferopol FIR at this time as the situation is unpredictable.

For more info on these latest developments in the UKFV/Simferopol FIR, see our dedicated article here.

What are other countries saying about Ukraine?

Aside from the US, several other countries consistently publish airspace warnings: the UK, Germany, France, and Canada

UK and France: both have warnings in place advising against all ops over both of these Ukrainian FIRs, with the exception of airways Black Sea routes in the UKFV/Simferopol FIR.

Germany: does not have any published warnings in place at all.

Canada: avoid the UKFV/Simferopol and UKDV/Dnipropetrovsk FIRs due to risk from heightened military activity and anti-aviation weaponry. Exercise caution across the rest of Ukraine’s airspace.