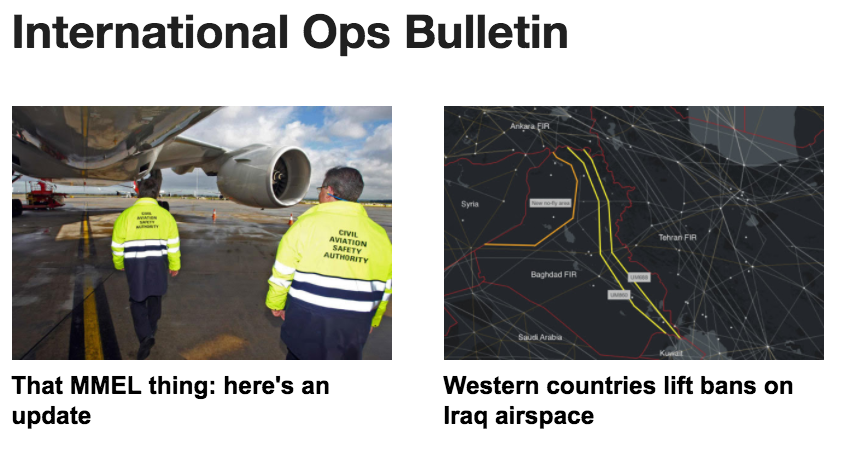 LFZZ/France The French ATC strike has been cancelled. It was planned to take place in the Marseille ACC (LFMM) from Jan 18-21, but was averted at the last minute as unions reached an agreement. ATC services will now be provided as per normal.

LTCG/Trabzon The airport has closed to all flights until Jan 19, as they work to remove the stranded Pegasus B737 that skidded off the runway on Jan 14 and came to a stop on a muddy cliff, with its nose almost in the sea.

OTZZ/Qatar The UAE allege that on Jan 15, Qatari fighter jets intercepted an Emirates aircraft in international waters just north of the tip of Qatar. Qatar denies the claim. Following the incident, the UAE CAA published a safety alert, warning about “unannounced and hazardous military activities within Bahrain FIR in airways UP699 and P699”, which they consider to be “a potential hazard to the safety of flight.” Qatar have filed a complaint of their own with the UN, claiming that UAE military aircraft have repeatedly violated their airspace during the ongoing diplomatic crisis between the Gulf states. All this complaining on both sides is much more likely to be political wrangling, rather than any kind of genuine airspace safety issue. [Full story]

FIMP/Mauritius and FMEE/Reunion have both escaped a direct hit by tropical cyclone ‘Berguitta’, which is passing just south of the islands as it continues to track south-westwards. FIMP reopened on Jan 18, and Reunion is set to open on Jan 19 at 0400Z.

EZZZ/Europe Last year, EASA began requiring all aircraft transiting European airspace to have an approved Minimum Equipment List (MEL) for each individual aircraft. An MEL that references the MMEL was not acceptable. EASA follows ICAO guidelines, and ICAO does not recognise MMEL as MEL. Now a joint EASA/FAA workgroup has been established, to try to sort out this mess. It looks like the FAA will soon issue a notice requiring international operators to obtain new D195 LOA’s, and EASA will halt any findings for a period of 12 months to allow for these new LOA’s to be issued.

OEZZ/Saudi Arabia A missile launched by Houthi rebels in Yemen was intercepted over the Saudi city of Jizan, near the Yemeni border, by the Saudi air defense system on the night of Jan 16. Houthi rebels stated that an airport in the region of Jizan was the intended target of the ballistic missile. This is the third Houthi missile to be intercepted by the Saudis in 2018 – none have resulted in casualties, but operators should consider carefully operations to Saudi Arabia.

EDDM/Munich Two big events coming up: the Davos World Economic Forum from Jan 22-26, and the Munich Security Conference from Feb 14-18. The airport will be busy for both, so best get your parking requests in early. Also bear in mind that all GA flights will need to get special permission to land at EDDM during these events. For PPR contact +49 89 975 21132 or email specialoperations@munich-airport.de

FACT/Cape Town After an unprecedented three years of drought, Cape Town has less than 90 days of water left in its reservoirs. The airport has published a Notam requiring all flights to tanker in water – don’t expect to be able to uplift any at the airport for the foreseeable future.

ORZZ/Iraq Expect ORER/Erbil and ORSU/Sulaymaniyah to re-open to international traffic soon. The Kurdistan Regional Government and Baghdad have reached an initial agreement to lift an international flight ban imposed on the autonomous Kurdish region by the Iraqi central government last year. No official date set yet.

VTSP/Phuket The runway will be closed overnight from 19-00z until at least Jan 21. There are also ongoing issues with BA/GA aircraft being unable to secure parking for longer than a few hours. Most are having to drop-off pax and then reposition elsewhere.

ESZZ/Sweden ESNN/Sundsvall has become the country’s second airport to have remote air traffic control, after ESNO/Ornskoldsvik made the switch back in 2015. So the local tower is now officially closed, and air traffic control service has been transferred to one of the country’s national control centres. ESSL/Linkoping airport will be the next one to be transferred to remote ATC later this year.

UUWW/Samara has put one of its two runways back into operation following reconstruction. The renovated strip is 3,000 meters long and 45 meters wide, and is capable of receiving Boeing 777 and Airbus А340 widebodies.

SBGL/Rio De Janeiro The annual Carnival will be taking place from Feb 9-13. Road closures and major travel disruption expected across the city. An estimated 6 million people, including 1.5 million foreign tourists, are expected to participate in the celebrations. The mayor of Rio has requested federal troops to provide support to local security forces to maintain order during the carnival period. So far, no special restrictions or procedures have been announced for SBGL airport, but it will be busy, so get your parking request in as early as possible.

HLLM/Tripoli Mitiga Heavy clashes broke out in the Libyan capital Tripoli on Jan 15, leaving at least nine people dead and forcing the airport to suspend all flights until further notice. Our advice: don’t land at any airport in Libya, don’t even overfly the country.

HEZZ/Egypt On Jan 13, Egyptian authorities imposed indefinite night-time curfews on areas of North Sinai province, including the cities of Rafah and Al-Arish. The Sinai region has suffered frequent terrorist attacks in the past few years. On Dec 19, militants fired artillery at HEAR/El Arish Airport in North Sinai, killing one army officer and wounding two others. There are still overflight warnings in place for the entire Sinai Peninsula below FL260.

SPZZ/Peru Airports in southern Peru are reported to be running as normal, following the 7.1-magnitude earthquake that shook the country on Jan 14, leaving at least one person dead and 65 injured in the cities of Arequipa, Ica and Ayacucho.

RPZZ/Philippines Volcanic earthquakes, rockfalls, and a number of steam-driven eruptions have shaken the summit of the Mayon volcano in the Philippines. More than 12,000 people have been ordered to leave a 7km evacuation zone around the volcano, which is located around 15km north of RPLP/Legazpi, and around 330km south of RPLL/Manila. There are warnings of destructive mudflows, and ash cloud around the volcano has been reported up to FL170.

FQMA/Maputo The airport will be closed overnight from 21-04z for runway repair, until Feb 28.

OEZZ/Saudi Arabia has issued an extension of the policy that requires all aircraft with a destination in Yemen to first land in OEBH/Bisha – through to Apr 13. The only exceptions are the UN, Red Cross, and MSF.

MMZZ/Mexico The U.S. State Department has issued its highest “do not travel” warning for five states in Mexico: the Pacific coast states of Sinaloa, Colima, Michoacan, Guerrero, and Tamaulipas on the eastern Gulf. The advisory says that “Violent crime, such as homicide, kidnapping, carjacking, and robbery, is widespread.” This latest advisory ultimately classifies these regions at the same level of danger as Syria, Yemen, and Somalia.

URSS/Sochi The Russian Investment Forum will be taking place from Feb 13-17. During that time, charter aircraft with wingspan over 24 metres will be limited to a maximum of 2hrs on the ground. Make sure you get your slots in advance through your handler.

TVZZ/St Vincent & Grenadines Reports of low fuel levels on the islands at the moment, so make sure you tanker in.

LIPZ/Venice The Carnival of Venice will be taking place from Jan 27-Feb 15. The general aviation terminal (GAT) is open daily 05-21z, with overtime available upon request, but bear in mind that both runways are closed for maintenance Mon-Sat 2330-0350z until Mar 24. PPR required at least 24hrs in advance – do that through your handler or call the airport PPR office direct: +39 041 260 6906. Currently there are only two large aircraft GA parking stands available at the GAT, and although parking may be possible on the commercial apron, it’s not guaranteed, so best get your request in asap.

EDDK/Cologne The airport’s two shorter runways (06/24 & 14L/32R) are both closed until the end of March, which is causing a few delays. And then on Jan 8, the airport had to suspend ops for a few hours due to emergency repair work which needed to be carried out on the only operational runway (14L/32R). It should be noted that all non-scheduled and GA flights must get PPR confirmed in advance, either through your handler or by calling the airport PPR office direct at: +49 2203 40 4310.

LSZH/Zurich The World Economic Forum is on from Jan 23-26. LSZH will be congested, so apply for slots early if you’re actually planning on stopping there. Earliest non-scheduled landing for a wide body aircraft without parking permission will be 1300z daily, Maximum 3 hour ground time for general aviation without parking permission. Also, you will not be able to use LSZH as an alternate to flights going to LSZS/Samedan. Note that LSZH operates from 05-21z daily, and overtime is not available – make sure you land before closing time or you’ll get diverted to another airport.

HCZZ/Somalia Somalia’s Civil Aviation and Meteorology Authority (SCAMA) regained control of Somali airspace on Dec 28, after 27 years of management by the ICAO regional office in Nairobi. The airspace will now be controlled in Mogadishu as the country has installed new air traffic control facilities at HCMM/Mogadishu Aden Adde airport.