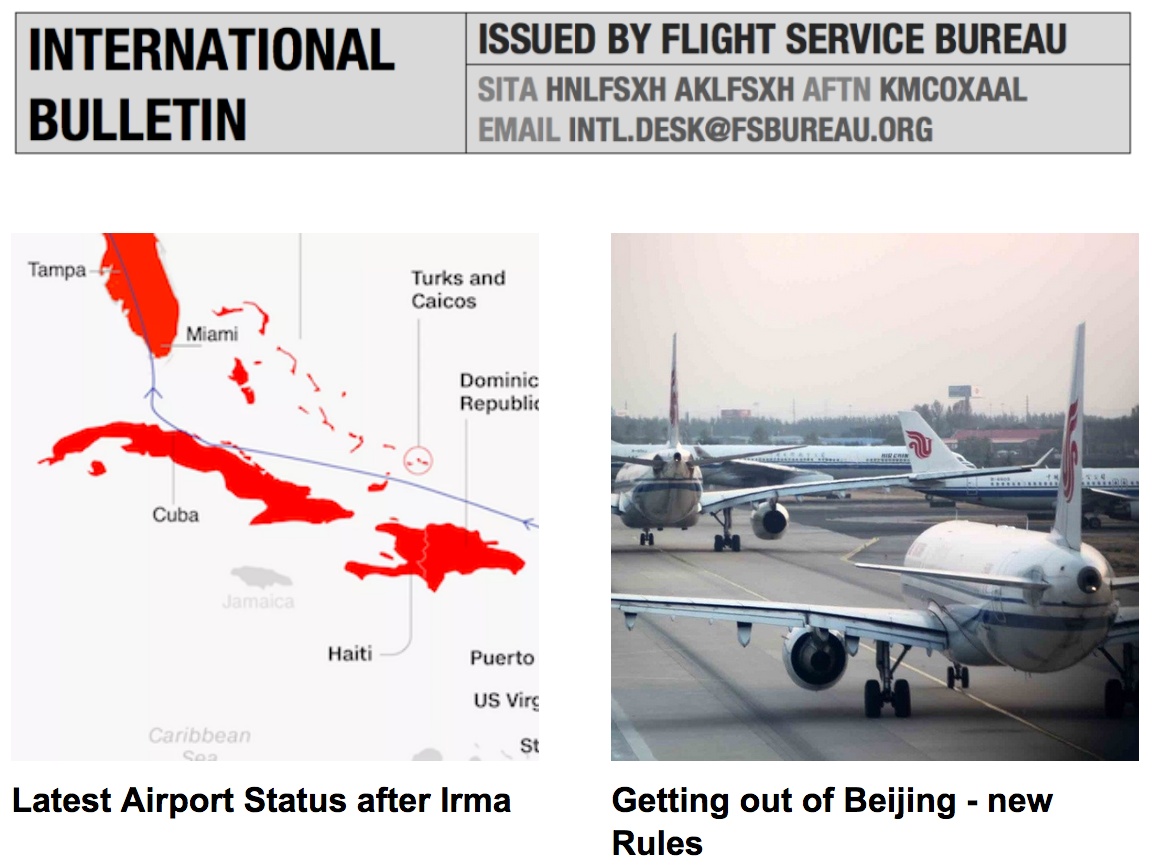 14SEP: Airport Status after Irma, Getting out of Beijing – International Ops Bulletin

14SEP: Airport Status after Irma, Getting out of Beijing – International Ops Bulletin

TIST/St. Thomas Airport is closed except for military and hurricane relief ops until 16SEP at the earliest. A contingency ramp has been set up to support hurricane Irma disaster response and recovery missions. All flight operations requiring services from this contingency ramp must get prior permission and a slot from the Irma flight operations coordination center (IFOCC) at 001-850-282-0236. [more in Aireport]

VIDP/Delhi Delays likely as one of the longer runways (RWY28) will be closed for landings until mid-October. [more in Aireport]

EINN/Shannon The overnight closures at Shannon will be extended until at least 01OCT. [more in Aireport]

LBSF/Sofia Starting at the end of September, any aircraft code B or above will not be able to park at Sofia for more than 72hrs.

LOWW/Vienna Want to remind operators that they need to put their arrival and departure slot ID numbers in section 18 of their filed ATC flight plans. If you don’t do it in the proper format, your flight plan will be automatically rejected by CFMU. See Austrian AIP SUP 019/13 for full details of how to do it! [more in Aireport]

EPWW/Poland No data link services will be provided in Polish airspace between now and next FEB, as they will be testing their systems during this time.

TNCM/St. Maarten Airport is non-operational, probably the worst hit of all airports in the path of Hurricane Irma. [more in Aireport]

RJZZ/Japan According to information emerging on 5 September 2017, the Japanese government is working to establish a four-tier emergency evacuation plan in preparation for a potential escalation in the situation with North Korea. Each tier will escalate according to the severity of the situation; the tiers include discouraging unessential travel to South Korea, discouraging all travel to South Korea, urging Japanese citizens to evacuate South Korea, and urging Japanese citizens to shelter in place. Cited as an example in the implementation of the plan, if skirmishes were to occur between the two Koreas, the Japanese government would discourage all new travel to South Korea and urge citizens to evacuate using commercial flights. Japan would implement the fourth tier in the event an attack prompted the closure of South Korean airport facilities. South Korea has reportedly agreed to give Japanese nationals access to safe zones — such as subway stations — in the event of a shelter-in-place directive. Japan is also coordinating with U.S. forces to transport evacuees by sea from Busan in the event of an evacuation.

OIZZ/Iran Iranian FARS news agency has reported that Iran has now banned US and Saudi aircraft (including commercial airlines) from entering its airspace. Still no official statement from the CAA or Notam yet…

UIBB/Bratsk Prior permission required until the end of September, due to limited fuel availability.

LDZA/Zagreb Airport’s only runway closed to all traffic (including emergency diverts) at various different times overnight until 17SEP. [more in Aireport]

UMMS/Minsk Airport closed most nights throughout September from 2100-0200z.

SOCA/Cayenne Take note when flying here, lots going on between 0000-0300 and 0630-1100 daily from now and 30NOV. Issues with staff shortages. The lower space FIR of SOCA will be unavailable to IFR traffic except state and emergency flights and you cannot file as an alternate unless you are based in SOCA, a state flight or emergency. [more in Aireport]

EGCC/Manchester You should uplift additional fuel before departing for Manchester. With Runway 05L/23R closed there is a high potential for holding delays. [more in Aireport]

EETN/Tallinn PPR required for parking longer than 3hrs. Email to  ad.apron.control@tll.aero from now until 02OCT. [more in Aireport]

USHH/Khanti-Mansi Check before flying here. The airport is closed sporadically right through September.

EGZZ/United Kingdom The UK has added North Korea to airspace warnings in their AIP ENR 1.1. They are warning of the area between 1200000E and 140000E due to the unannounced missile tests in the area of the Sea of Japan.  See NOTAM V0012/17 for full text.

SPJC/Peru Strikes are taking place in the historic centre of Lima and some other parts of the country, leading to temporary transport disruption. You should monitor the news and follow local advice. [more in Aireport]

TKPK/St Kitts All Private pax must process through the YU lounge, not through the main terminal.  Use a handler to get access to the lounge.