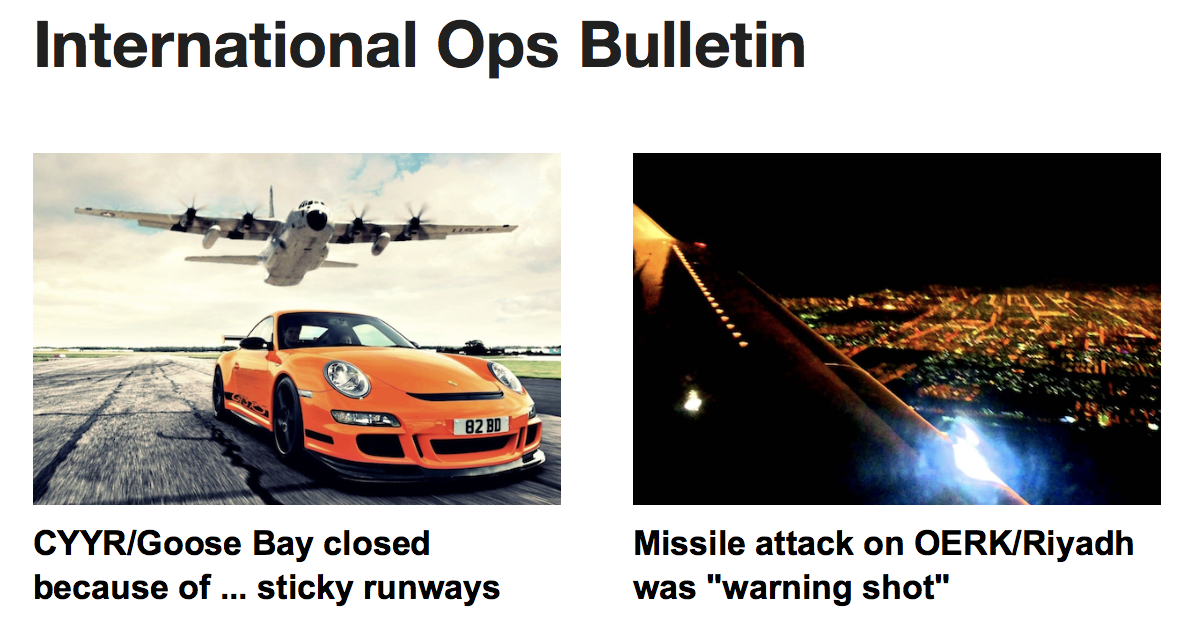 ENSB/Svalbard Discussions complete with the Norwegian CAA! You can continue to use ENSB as an ETOPS or emergency alternate. When the airport changed to domestic status in October, it meant that operators could no longer file ENSB as a destination alternate. But, CAA says that it will remain available H24 for emergency diverts, and RFF8 is the normal fire category. If you want to confirm any details, chat with ATC there at +47 67 03 54 25. Full article.

VIDP/Delhi A double whammy of delays at Delhi Airport at the moment. One of the airport’s three runways is already completely closed for repair until 0130Z on Nov 10, but now extreme smog is causing extra delays as flights are having to be staggered. Avoid VIDP for the next few days if possible. FSB Blog.

LIZZ/Italy The National ATC Strike planned for Friday from 12-16Z, has been cancelled. Ops normal, apart from some potential local stoppages at LIRF and LIPO. No further dates for strikes set. FSB Blog.

SBGR/Sao Paulo New long term parking procedures are in effect at SBGR – if you want to stay for longer than 3 hours, you’ll have to go park over in the Open Air Hangar (OAH) area, rather than just on the apron as before. The F1 Grand Prix is coming up there again on Nov 11-12; last year they were turning away lots of aircraft because they had no space to park them – this year, that won’t be a problem. The bad news is it’s probably going to cost a fortune to park on the OAH – expect around $2000 USD per 24 hours (without any serious price reductions if you stay for less time), and a mandatory towing charge of $300 USD each way. FSB Blog.

OYZZ/Yemen The Saudi Arabia coalition has closed all air, sea and land borders with Yemen after the missile strike on Riyadh on Nov 4, effectively closing all airports in Yemen. Yemenia airlines said Monday that the coalition, which controls Yemen’s airspace, had declined it permission to fly out of Aden and Seiyun, the only two remaining functioning airports. OYSN/Sanaa has been closed since August 2016. All UN humanitarian flights to Yemen, one of the few international operators, have been cancelled after flights were no longer given clearance from the Saudi-led coalition to land in the country. Full article.

ORZZ/Iraq Local ATC controllers tell us that the strike is over – they are running what they call ‘ops normal’ for two weeks, before they will/may strike again as negotiations continue. Inside word is that a number of local controllers have been fired, and Serco were providing most of the staff to cover the centre. Baghdad FIR Control Centre and Iraqi Airports are running normally – for now.

DNZZ/Nigeria A shortage of Jet A1 is affecting operations in Nigeria, especially affecting DNMM/Lagos and DNAA/Abuja. This has happened in previous years also, with local comment that it may be artificially created. Check before operating or using DN as RALT.

SOZZ/French Guiana The ATC strike has been extended to Nov 15. Airspace will be uncontrolled during the daytime hours 1100-2030z, but ATC will be working at night – unless you see any last-minute Notams saying otherwise. During this time, if you want to cross this bit of airspace, there are now very specific routes and levels you have to fly at in their contingency plan. Once you’re inside the FIR, don’t change your speed or level. ATC staff at SOCA/Cayenne airport are not part of this strike, but check airport Notams for various runway closures throughout November.

RPZZ/Philippines ASEAN Summit coming up this Friday, more restrictions announced. RPLB/Subic Bay will be completely closed to civilian ops until Nov 15. Expect it to be especially busy at RPLL/Manila. Nov 12-15 only allowing departures from 13, and arrivals on 31, and GA banned unless connected to the event. FSB Blog.

OMDW/Dubai The Dubai Airshow will be taking place between Nov 12-16 at Dubai’s second airport, Al Maktoum International. However, with all the rehearsals they’ll be doing, the airport will be closed to non-airshow traffic at various times each day starting from Nov 8th. So if you’re headed there, check the Notams carefully. FSB Blog.

SUZZ/Uruguay The ATC strike has been extended, with three more days of 2 hour stoppage action added – Nov 12, 14 and 16. Only departures affected.

MMOX/Oaxaca Significant disruption from ongoing roadblocks by transport workers. Blockades have reportedly been erected on some roads heading towards Xoxocotlan International Airport (OAX).

FAOR/Johannesburg Another ‘Follow-home’ robbery on Nov 2. Three foreign travellers were robbed after being followed from OR Tambo airport, and used Police ID to stop the vehicle. Persistent crime threat, crews should be aware.

LEZZ/Spain Roadblocks reported around Barcelona, blocking Via Laietana, Travessera de Dalt and Gran Via avenue. and on the C-17 motorway. Protesters are reacting to the arrest of Catalan leaders by the Spanish authorities, following the region’s unilateral declaration of independence on 27 October. Major demonstrations are planned for Nov 11-12. FSB Blog.

EHRD/Rotterdam Closed for runway repair from 23-05z each night until Nov 12, and then the airport will be completely closed for three full days from Nov 13-16. FSB Blog.

URRR/Rostov A new airport has been built, called Platov International Airport, and it’s set to open on Dec 1. ICAO code will be URRP, and the longest runway is 3200m. This will replace the old URRR/Rostov Airport, which is expected to close by March 2018.

KZZZ/USA The FAA has published a ton of information on Thanksgiving and Snowbird routes for the upcoming holiday season. Everything you might need is here.

OEZZ/Saudi Arabia Several press reports quoting a Yemeni rebel threat to further target Saudi and UAE airports, after their missile reached OERK on Saturday, specifically, ‘We urge all airline companies and travelers to avoid airports in both Saudi and UAE as we consider them a legitimate military targets within the range of our ballistic missiles’. Full article.

NCRG/Rarotonga has limited fuel at the moment; won’t be available to non-scheduled flights until Nov 13.

GOOY/Dakar International Peace forum Nov 13-14, many heads of state attending, airport will be busier than normal, confirm fuel and handling.

NVVV/Port Vila The reconstruction of Vanuatu’s main airport has finally begun, after a few major airlines cancelled flights there back in 2016 due to the shoddy state of the runway. For now, the runway remains operational, but they’re just asking aircraft over 35 tonnes to go easy on the brakes.

LGMK/Mykonos Between Nov 12-19, the only way to get to Mykonos will be by helicopter. During this time the airport will be closed to all other flights, as they’re doing runway repair work.

FMZZ/Madagascar There has been a decline in the reported number of cases in the ongoing plague outbreak, but the disease still remains present in cities of Antananarivo and Toamasina, as well as in rural areas. There have been around 2000 cases of plague since August, including 140 fatalities. Don’t go there unless you absolutely have to.

HSZZ/South Sudan The security situation in Juba remains tense following the President’s decision on Oct 30 to deploy a military and national security personnel presence to surround the residence of the former Chief of the Army staff; he has been under house arrest since May; the UK FCO continues to advise against all travel to South Sudan.

LTZZ/Turkey On Nov 6, the U.S. diplomatic missions in Turkey resumed visa services on a “limited basis.”, a rollback of the U.S. decision on Oct 8 to suspend all non-immigrant visa services after the arrest of an employee of a U.S. Consulate; Turkey reciprocated the move the same day. It is unclear whether the U.S. will completely lift the suspension or whether Turkey will also rollback its suspension.

OBZZ/Bahrain US Embassy in Bahrain issued has issued a Security Message concerning travel in Bahrain. Authorities have located several unexploded IEDs recently, and there are several upcoming events which may lead to demonstration and protests.

KZZZ/USA Enhanced security measures on US-bound flights came into effect last week. These include: enhanced surveillance of aircraft on the ground and of the departure gate area; more sniffer dogs; Explosive Trace Detectors will be used for airport security checks; and there will also be a personal interview for each traveller (of the kind that already takes place for travellers on US carriers). Airlines are instructing passengers to arrive to the airport early, and to make sure all their electronic devices are charged and removed from their cases before security.

SKZZ/Colombia On Oct 31, the government authorised airstrikes against armed groups. The directive allows for military action against such groups, including dissident members of the Revolutionary Armed Forces of Colombia (FARC) as well as armed paramilitary groups, BACRIMs. The authorities have said that military operations will begin in the coming days; a specific date has not been announced.