The Hills Have Ice: Considerations for Himalayan ops

The Hills Have Ice: Considerations for Himalayan ops


Flying over the Himalayas soon? Read on! From patchy comms to limited alternates to meters that might get your feet in a twist, this briefing will have you covered…

A good place to start might be “Where are the Himalayas?”

The Himalayas border a bunch of countries, but the bits we are generally interested in lie in Pakistan and China – along the primary flight routes between the Middle East and Asia.

Interesting fact – they are the fastest moving mountains in the world, thundering along at a right old pace of 67mm a year (so don’t worry, they will still be in pretty much in the same spot when you route over them).

Are they a big deal?

They are the biggest mountains in the world so “big” – yes. “Big deal”? – well, not so much if you are cruising happily at altitude, but if for some reason you suddenly need to descend then they can become a very big deal very quickly.

With 30 peaks higher than 24,000’, and stretching over 200 miles, they are a pretty significant obstacle. 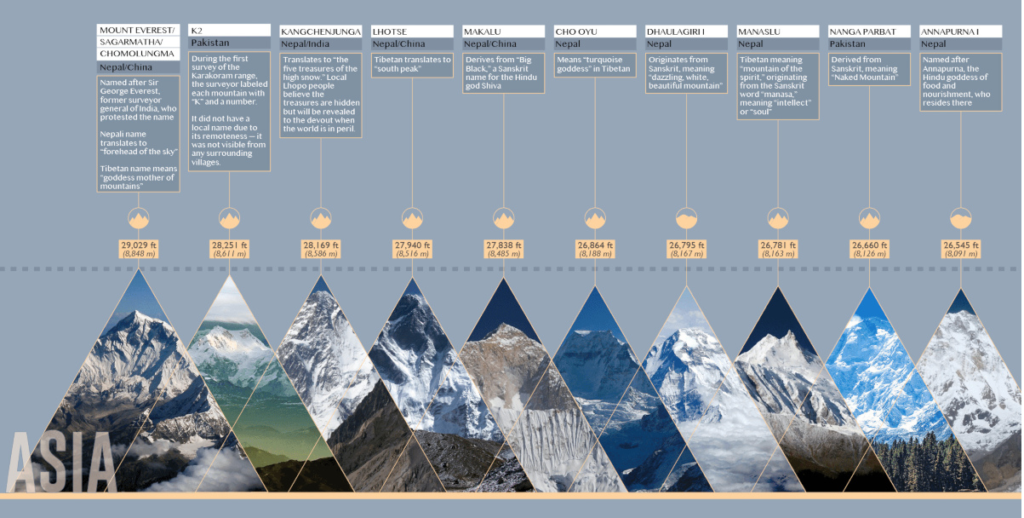 There are some good-to-know and some need-to-know points about these parts, so read on…

Limited Alternates – Not many people live in the Himalayas, (not counting Yetis), so airports are few and far between, and are often fairly remote.

The Region – Pakistan has ongoing conflicts with India over the Kashmir region. Afghanistan is also unstable so operating near the border is not advised, particularly into OPPS/Peshawar and OPQT/Quetta airports.

Weather conditions – ‘Himalaya’ translates as ‘abode of snow’ so that should be something of an indication. The airports are remote and facilities are not always up to standard. Significant mountain waves can be experienced when crossing.

Communications – Big mountains block radio signals and this can be particularly bad around the point where you transfer from Pakistani airspace into Chinese. Which leads us onto the next point…

China – They have their own procedures including different sized airways, different contingency procedures, and of course…

Oxygen – Airplanes have oxygen in them, unless they suddenly don’t anymore and then you are going to have to find some pretty rapidly. Unfortunately, oxygen is generally at its most plentiful lower down which can be problematic if routing over high terrain… 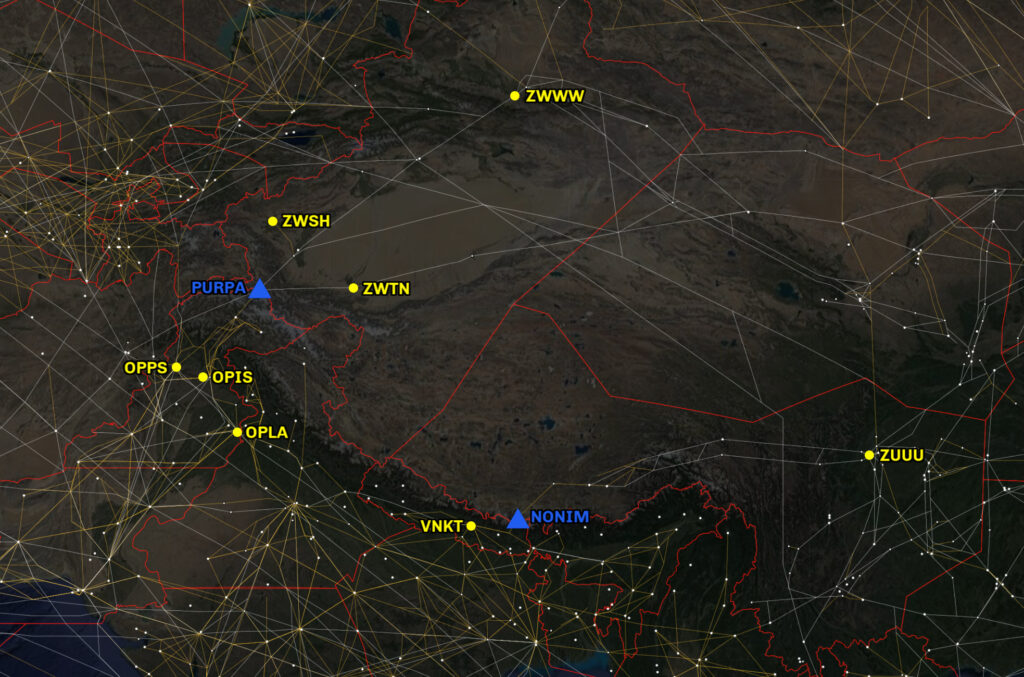 OPIS/Islamabad, Pakistan – There are two parallel runways with RNP and ILS approaches, including a CAT II on 28L. 10R has an offset final track (VOR approach). This is a destination for some major airlines and so likely has good handling and ground services, an is an RFF Category 10.Where you decide to divert to will depend on what your problem is and whether you can stay up over the mountains. Peshawar, Islamabad and Lahore are each accessible from each other and all lie south of the mountainous zone.

OPPS/Peshewar, Pakistan – This airport is situated near a No Fly Zone and is close to the Afghan border. It has CAT I capability, but report of GS fluctuations are common. Ground handling is available, but engineering and other support is likely to be limited.

OPLA/Lahore, Pakistan – This is another major airport in the area with multiple runways, and Cat IIIb approaches onto 36R. Terrain is relatively low, but the airport lies close to the border with Indian airspace.

ZWSH/Kashi, China – The airport is CAT I. There is serious terrain to the north and west of the airport. Particularly if you are landing onto runway 08, wind off the terrain might be a factor. Runway 08 may require a 180 degree turn at the end with a backtrack due to works. Support here will be fairly limited.

ZWTN/Hotan, China – There is no customs at Hotan so offloading passengers might pose a problem. The closest alternate is not really very close, and the weather here can be a challenge. The MSA is 16,000’ and terrain lies predominantly to the south of the airport, but close to the ILS intercept for runway 29. Runway 11 only has a VOR/DME approach. Both runways require a 180 degree turn and backtrack to vacate. Engineering support is available here.

ZWWW/Urumqi, China – Urumqi is a better equipped airport, with CAT I and II approaches available, and likely to have better ground support and engineering services. However, there is significant terrain in the vicinity of the airport, and it’s also a long way to have to go in an emergency (around 700nm from Pakistan/China crossing point PURPA).

VNKT/Kathmandu, Nepal – Down south, Kathmandu is really the last decent diversion airport before the endless mountains of the southern Himalayas come into view. If you don’t stop here, it’s a good 3 hours of flying time before you reach ZUUU/Chengdu on the other side. VNKT is not 24 hours (has quite specific hours), no engineering facilities but fairly good ground support as it is quite a “major” tourism spot so a fair few airlines route in there. Does not have precision approach (only VOR and RNP), and they have a lot of diversions due to weather and higher minimus due no precision approaches. Very difficult approach because you route between mountains into a sort of bowl to land.

The mountains can cause serious interference with radio comms so keep the following SATCOM codes handy in case you need them:

China has some pretty specific procedures and requirements which should probably be looked over before you route this way, but here’s a quick summary.

Contingency/ Emergency Procedures if deviation from level required:
– Aircraft must turn RIGHT and track out to 10km/ 5nm from the airway centerline.
– Once parallel with the original route climb or descend as required.
– Switch your lights on, keep talking on 121.5, and keep a good eye out.

Any deviation or reroute requests in China usually needs some serious coordination, and they are strict about any routes that take you off commercial airways or close to military airspace. ATC often send airplanes in random directions, or refuse to clear them to the flight levels they have filed for, without much explanation so be prepared for a lot of extra fuel burn. 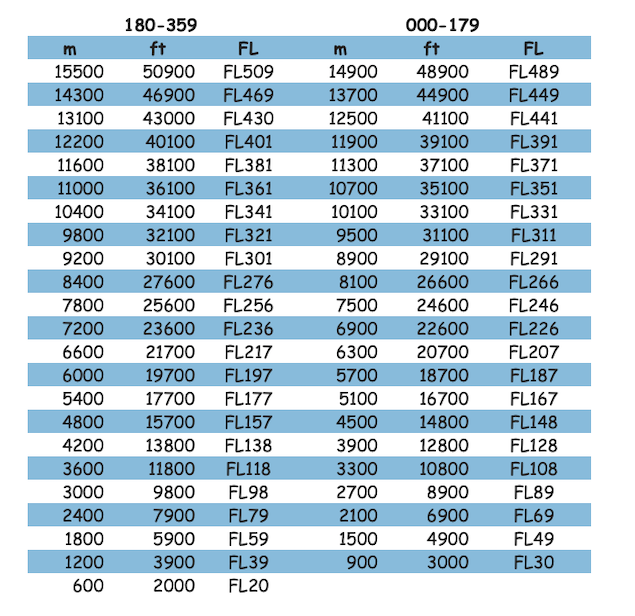 The most critical route is PS-G325-Purpa-B215 where the MTCA is the highest. Confirming your aircraft is equipped with suitable passenger oxygen systems and awareness of the depressurisation strategies and MSAs for each route is extremely important before operating into this area.

China also require permits. These can be intimidating. They require use of AFTN/SITA, have specific routing, and are only valid for the exact timing given. Commercial landings require a sponsor later written in Mandarin by the receiving party. We recommend applying direct to a Chinese agent, as the authorities aren’t very patient and it can become frustrating at how short they’ll be on the phone. If you want to apply direct, you’ll send your application through AFTN and SITA, in the specific format required.

China requires aircraft to be ADS-C, CPDLC and SATCOM capable on some of their routes over the Himalayas, and operators need to verify their equipment with them at least 60 days in advance! So they recommend that only regular scheduled flights apply to use these airways. For more on that, check out our dedicated article here

For some great insights into escape route planning, check out this doc from Flightsafety.org

And finally, don’t forget to take your camera because when the air is clear the views can be amazing! 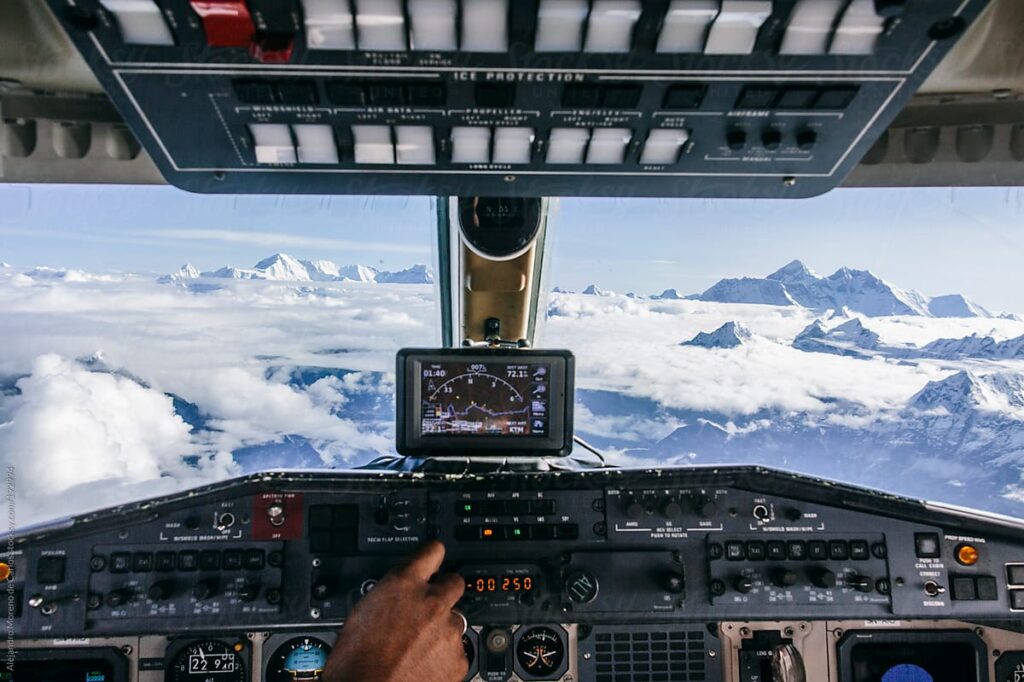