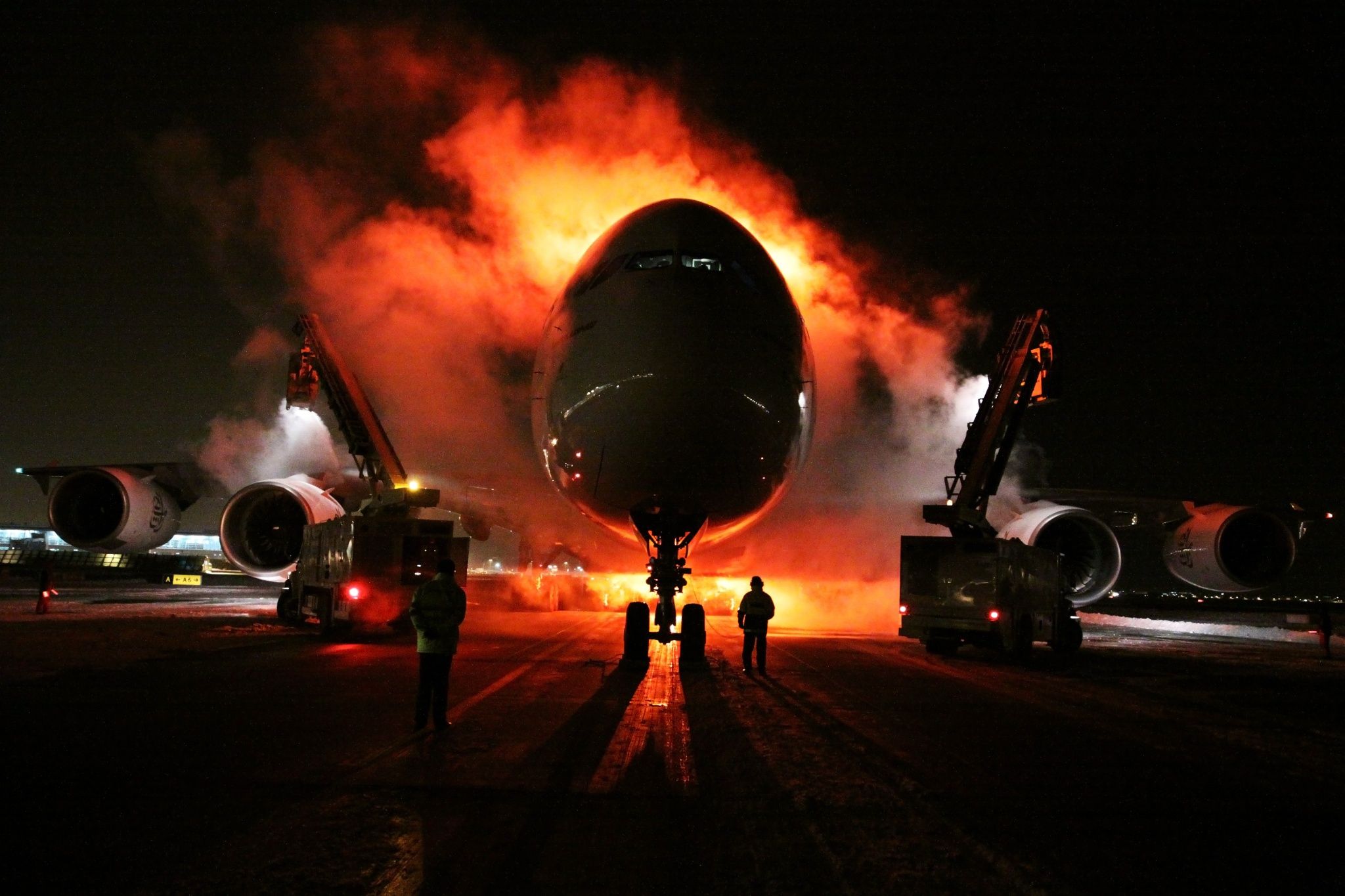 Rolling the dice with de-ice

Rolling the dice with de-ice

Snow, ice, sleet, hail – basically anything made out of really, really cold water means one thing – delays! Sorry, I meant to write de-icing there.

There are a few reasons why folk feel frosty about de-icing. First, it is a bit annoying – it does often mean delays. It also means extra things to think about, work out, and worry over. De-icing is an extra, and often slippery step, in an otherwise nicely structured turn-around.

Secondly, it is pricey. De-icing and anti-icing fluids are expensive stuff. For a small private jet you are probably looking at about $1200 , and more like $15000 for a large airliner. The call out fee alone is generally a few hundred bucks, and although we all have safety as a priority, most of us have called the de-icing rig out only to watch them spray copious amount of fluid all over the place while we wonder whether that little patch of frost on the wing really wouldn’t have melted off as we taxied out.

Lastly, and maybe not one everyone worries about, but anything with glycol in it creates high level of biochemical oxygen demand. What does that mean? Well, just that it is a bit bad for fish or anything that lives in water and likes to breath oxygen. So it ain’t the friendliest stuff for the environment.

Let’s be honest though, point 2 (with a bit of 1 thrown in) are probably the main reasons why we sometimes wait, fingers crossed, and fuel pumps a-swilling in the hope it just melts off before we go. 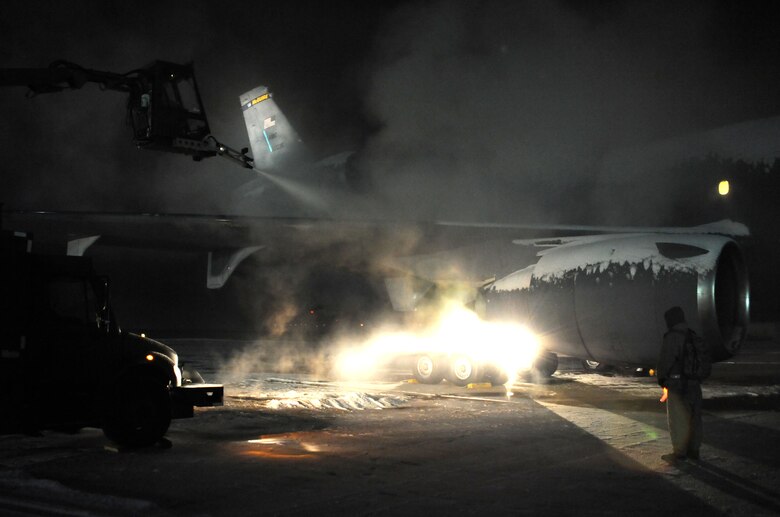 That middle of the night 2 hour wait for de-icing

There is of course a big reason why we do need to de-ice. We are all fairly well aware of it – safety! Or more specifically – performance! Because a little bit of ice means a big bit of (lost) lift. (Don’t worry, not an icy accident movie, just a video of a poor de-icing decision).

Most airlines and operators apply something close to a “clean aircraft” policy, which means that all critical surfaces should be clear of contaminant.

Simple – see something on a bit of the airplane that’s used for getting the airplane up in the air? Get if off before you go. This rules applies to bits like the wings, the horizontal stabilizer, and don’t forget in the engines – ice shedding after a prolonged taxi in wintery weather is going to help shake off any chunks of ice clinging to them. 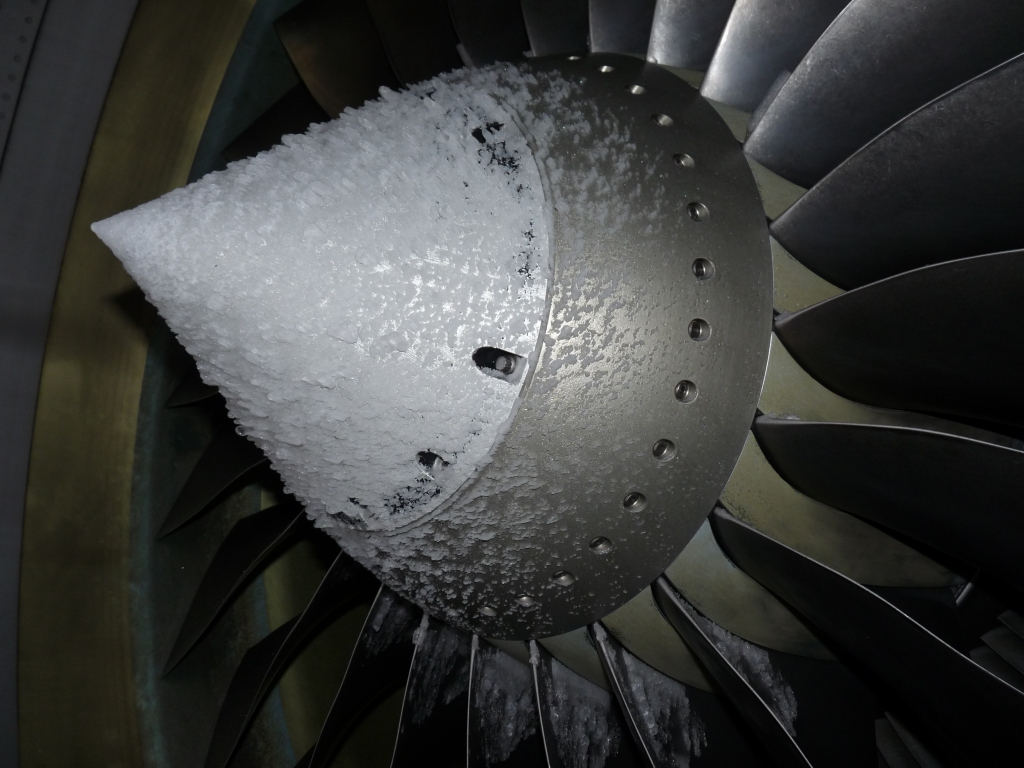 Back to those critical surfaces though – if you see a bit of frost (less than 3mm thick and so you can see the paint markings through it) underneath the wings? That’s ok.

Look out for clear ice – not always very visible (being clear and all).

So, step 1 in the “Do I need to de-ice?” decision making process is pretty straightforward:

If you answer ‘Yes’ to any of these than you probably need to de-ice. If you’re not sure, get a second opinion from your co-pilot or engineer. 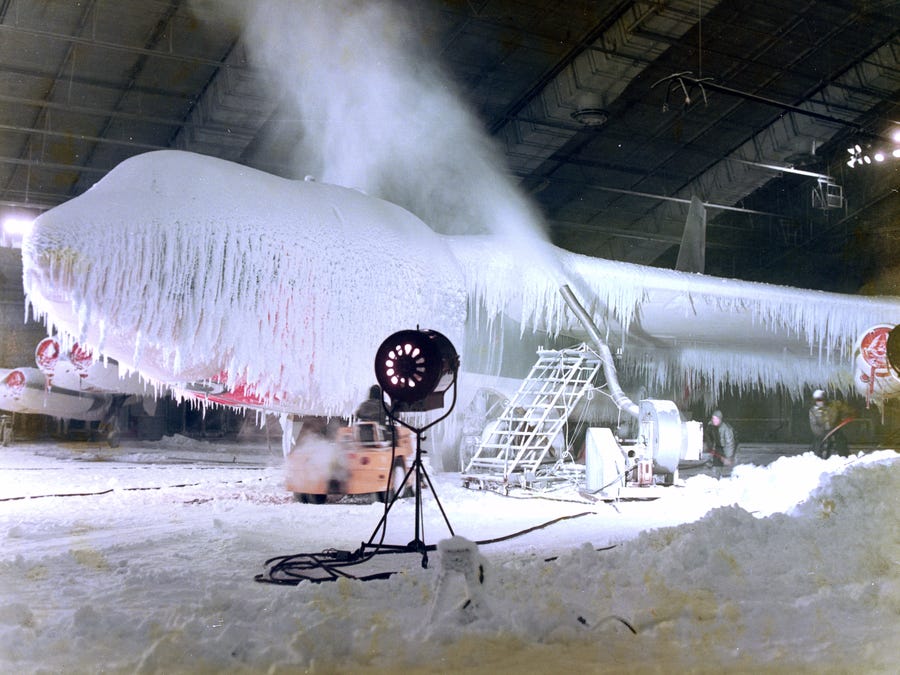 Hard to say if this needs de-icing or not

Snow idea if you need to anti-ice?

De-icing is the process of getting any contaminant off. Sometimes blowing hot air is enough, sometimes a Type I fluid is used to melt it off. This one-step process is fairly quick and unless there is a big old queue you probably won’t delayed too much.

Anti-icing comes in when there is a chance ice and stuff will build up again. So if you send the FO out on the walk around and they return red nosed with icicles on their eyebrows then you probably need to anti-ice as well. Simple in theory: de-icing takes it off, anti-icng stops more getting on.

So what options do we have for this, aside from wrapping the airplane up in a giant woolly sock until it is time to take-off?

Well, you have four types of de-icing/anti-icing fluid options open to you. Not all airports will carry all options so if you think you need something specific, check with an agent before heading there. These four fluids are all typically made out of ethylene glycol or propylene glycol, with a bunch of thickening agents, wetting agents, corrosion inhibitors, colors and some UV-sensitive dye thrown in.

Our top tip: Let your passengers know you’re going to de-ice. If they haven’t seen it before, having dinosaur like rigs pull up to the airplane, or seeing the windows fog up with thick smoky smoggy fluid has been known to panic one or two.. 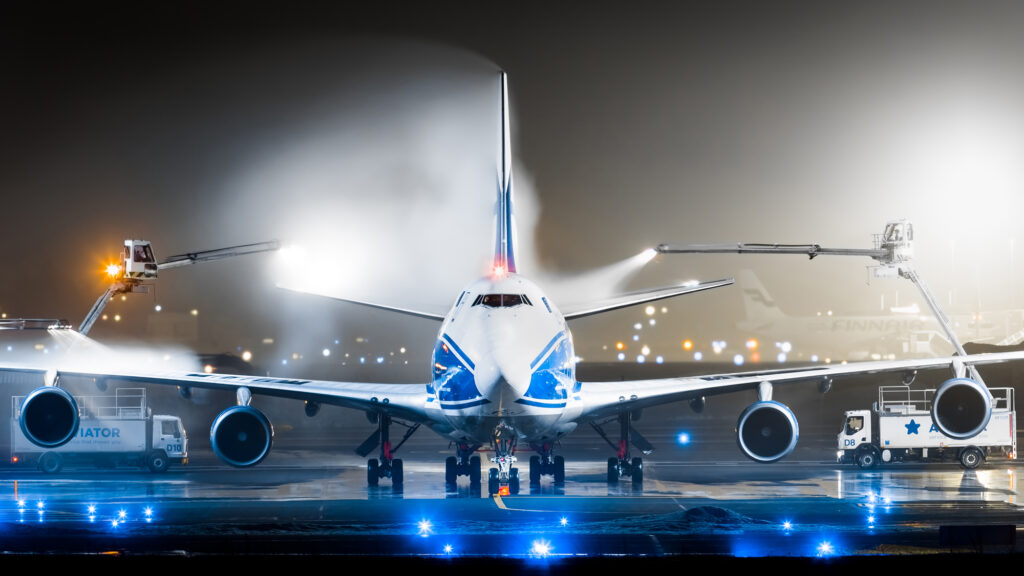 Your HOT – ‘Holdover Time’ – is what we really worry about when we need to anti-ice. There is no definite “this fluid will last this long” calculation. Instead we have tables for checking how long you’re probably ok for, depending on a few factors:

The table is going to give you two times – a minimum and a maximum, and your best bet is to take the minimum one and if you reach it, take a look at your critical surfaces and see what is going on with the fluid. Actually, a pre-departure contamination inspection is mandatory in most cases. If its look ok (really looks ok) then you’re good to takeoff. Exceed that though and you’re going to need to taxi back, clear it off and start over.

In nasty conditions, keeping an eye on the fluid and the hold over times is super important. There are actually no published HOTs for anything more than light freezing rain. Snow pellets and hail also get messy because these sticky morsels and strong and like to stick to anti-icing fluid, instead of getting melted by it.

If you are looking at rain or light freezing rain on cold soaked wings then your HOT could be as low as 9 minutes. If you have snow pellets or snow grains bouncing off the windows, and it is colder than about -14°C (so anywhere in Canada, Russia etc in the midst of winter), then these blighters are going to reduce your HOT to as little as 1 to 2 minutes (good luck getting anywhere in that time!)

Hitting the hold over time might suck, but there isn’t much you can do about it except call the cabin for another, stronger coffee, and settle in for a long, cold flight.

Another top tip – check those HOTs and if they are unrealistic then wait for the weather to clear, ask for remote de-icing, go for a different fluid dilution… whatever you do don’t ignore it though and think it’ll all be ok. 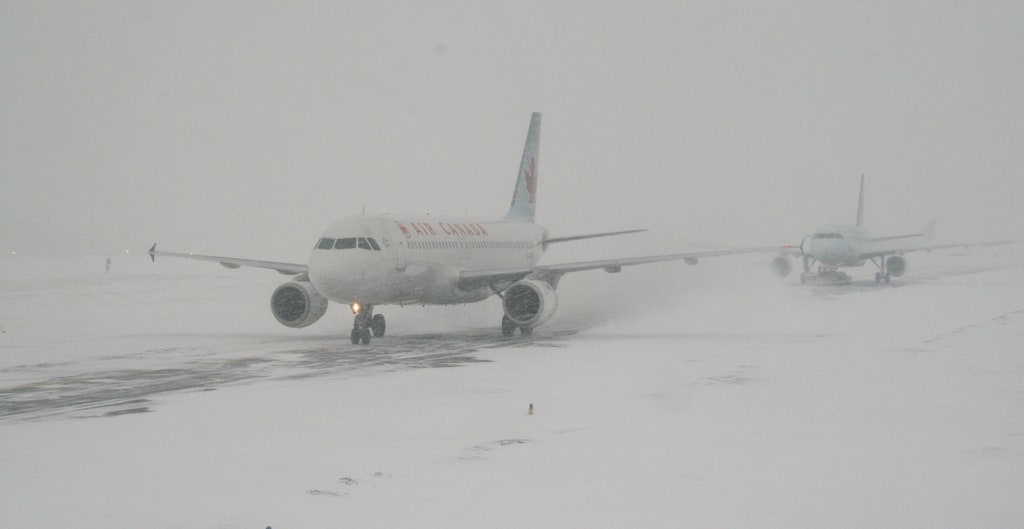 Messing with your schedule

Back to Point 1… or was it 2? The one about delays and messing up of your schedule. Winter weather is going to mean delays. There are no two ways about it. The extra steps added into our pre-flight process also raises the risk of forgetting bits we need to do. So here is a handy checklist of items to remember to remember:

So de-icing delays aren’t going away anytime soon, but there are some interesting technologies out there being trialled.

Our favorite is this one – originally developed as a de-frosting method for cars, it could eventually be applied to aircraft too. It works off the principle that ice actually has an electric charge, so the idea is if you pass a big charged-up electrode over a frosty surface, it will remove it.

This isn’t a totally new idea either, inflight de-icing technologies are also starting to look at using electromagnetic induction over traditional heating methods to prevent ice build up.

Until then, all we can do is buy a big cup of coffee from the airport, prepare for a long wait, and remember to “keep it clean” (and safe).