On March 29, a large UN transport helicopter crashed in Eastern Democratic Republic of the Congo while operating a surveillance flight.

The DRC Government has accused (but not proven) a recently resurgent militant group of shooting down the aircraft, after renewed fighting against the government military in recent days.

The country itself has a chequered history of non-state actors actively targeting aviation assets including aircraft and airports, and there may be more to come.

This spells danger for civil aviation, and with an absence of official airspace warnings for the FZZA/Kinshasa FIR, the risks may be on the rise.

Here’s a rundown on the current situation, and what you need to know to stay safe.

What’s been going on there?

A militant group known as M23, or March 23 Movement, has recently become active again in Eastern DRC, in a province called North Kivu. It sits close to the borders of Uganda and Rwanda.

The group were previously engaged in a conflict with the government who expelled them across the border in 2013. Then just days ago, M23 unexpectedly became active again by attacking military positions in North Kivu – which is where the UN helicopter crashed. This was amidst heavy fighting.

There is potential for the skirmish to develop into a larger and longer running war. And that means risk for aviation.

A history of attacks on aviation.

If the UN helicopter was indeed shot down by M23, it wouldn’t be the first time. They, along with other militant groups, have a known history of attacking government owned aviation assets:

And there are fears that since the ceasefire in 2013, M23 have been retraining and rearming themselves with weapons that could target low flying aircraft. This includes Man Portable Air Defence Systems (MANPADS) and anti-aircraft artillery which are distributed among militant groups throughout many countries of Africa – including the DRC. 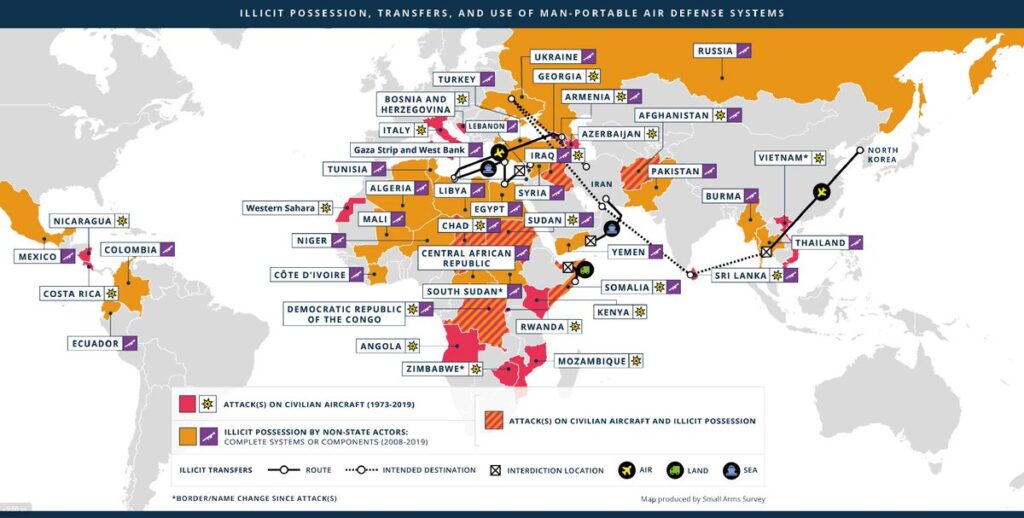 Africa is particularly affected by anti-aircraft weaponry in the hands of non-state actors, including DRC. Credit: Small Arms Survey

Militant groups such as M23 tend to specifically target government and military interests. There has been no indication of desire to endanger civil aviation. But the renewed intent to attack Government owned assets also increases the chance that civil aircraft may be misidentified, or mis-targeted.

Aircraft are most at risk at low level and low speeds which means they are most vulnerable when taking off, landing or on the ground. The Eastern Provinces of Ituri, North Kivu and Katanga are particularly dangerous. 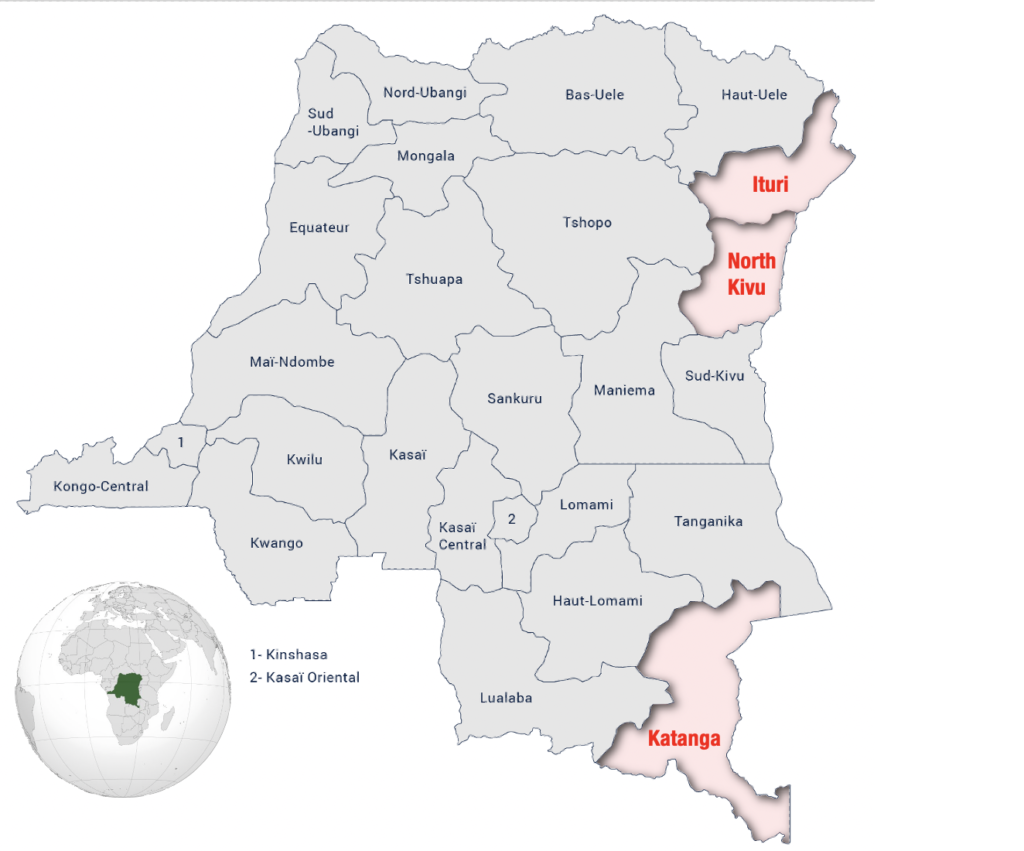 Three provincial hotspots to look out for where active conflicts are taking place.

There is little risk to overflying aircraft at higher flight levels. The issue for overflights becomes the need to divert. The Democratic Republic of The Congo is a huge country, which covers almost a million square miles of Central Africa – that’s more than Alaska and Texas combined. If you’re overflying it, you’ll need somewhere to land if something goes wrong. This is when militant activity becomes more of a danger.

Security risks in Eastern DRC are very high, and special care needs to be taken right now about options for diversions.  Landings at airports in the above three regions are dangerous and should be avoided . For overflights in this region, alternates across the border are safer options – especially HRYR/Kigali in Rwanda.

In Eastern DRC, FZNA/Goma is considered to be a reliable option, along with FZQA/Lubumbashi in the south and FZIC/Kisangani to the north. Further west the best option remains FZAA/Kinshasa. It’s important to remember though that no parts of the country are fully immune to militant activity and risks may be present at varying levels throughout the country.

This means if you’re planning on operating there, it’s important to carry out a risk and security assessment using trusted sources which may include local contacts, and security services offered by companies like Medaire.

Contingencies need to be in place for ensuring crew, passenger and aircraft security in the event of both planned and unplanned landings. 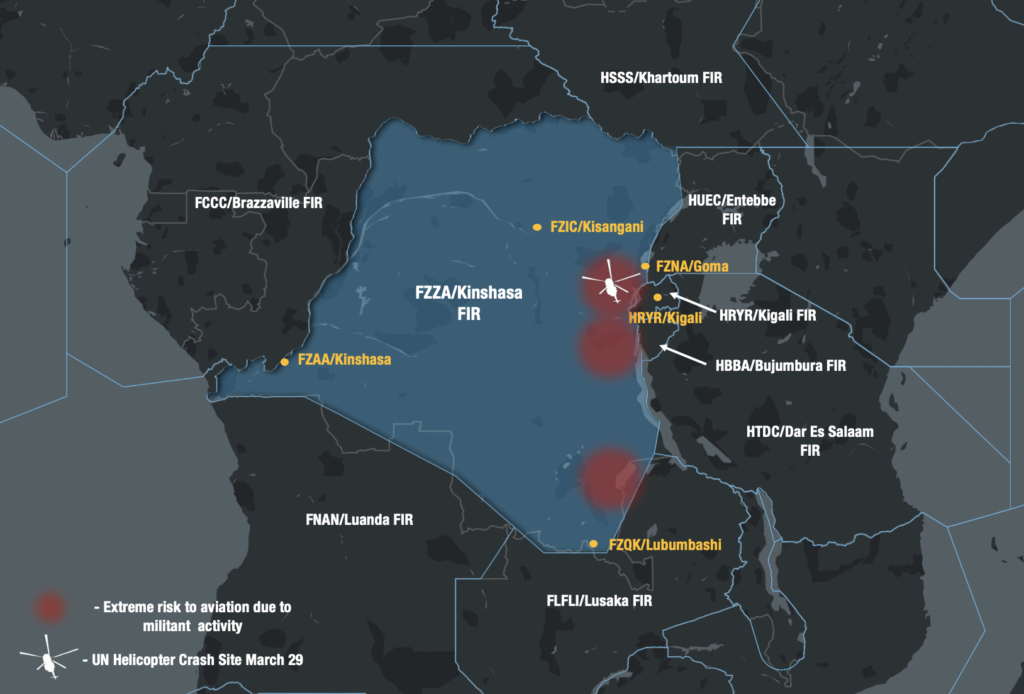 Safe diversion options are highly limited in the DRC.

The ongoing situation in Eastern DRC is unpredictable. You can stay up-to-date with any changes or new risk alerts via SafeAirspace.net as they happen – it is our free Conflict Zone and Risk Database that we keep updated around the clock.