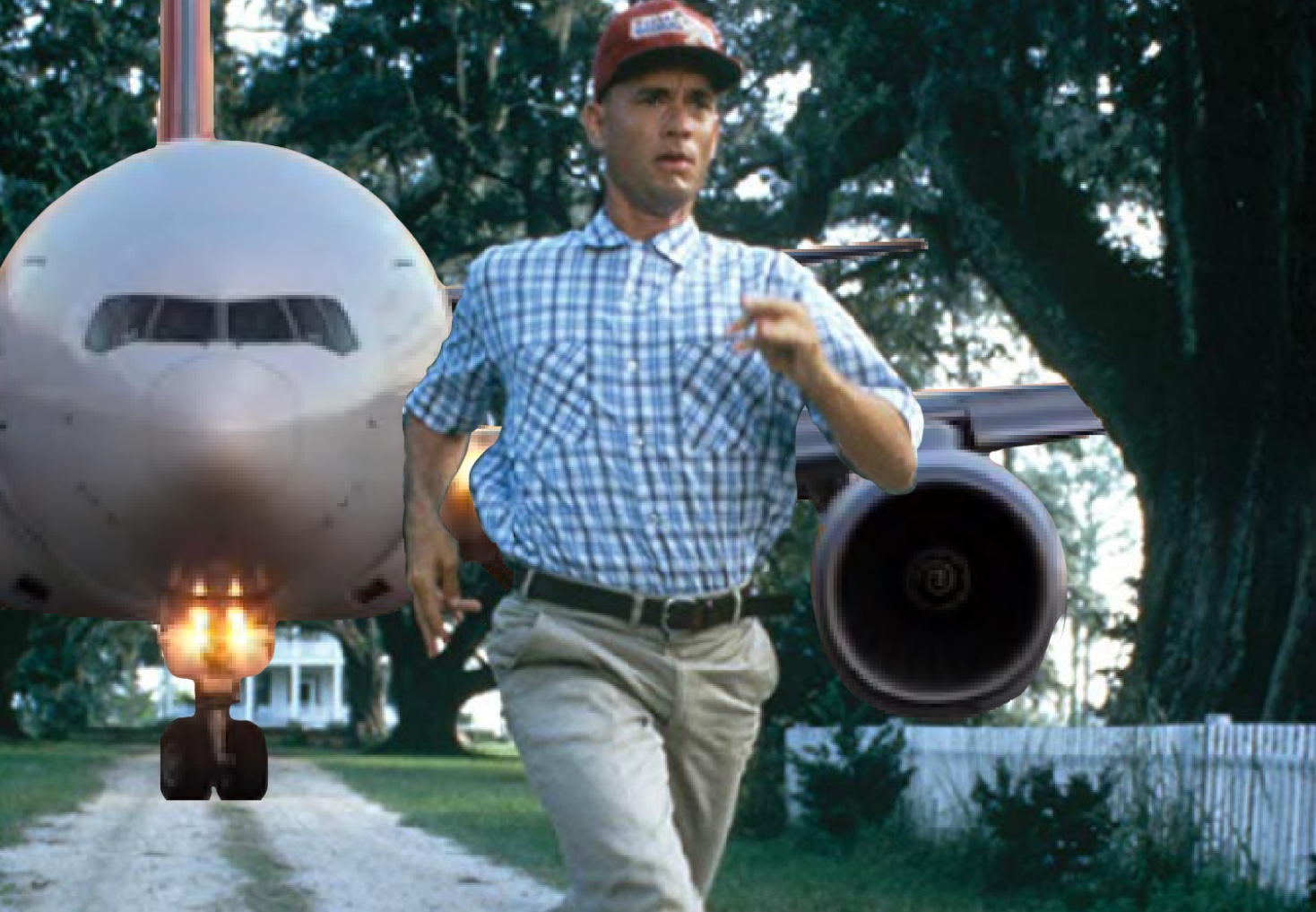 
Earlier this week the Accident and Investigation reports came out about two aircraft overruns, on the same runway, that occurred within two hours of each other.

So what was going on in UEEE/Yakutsk back in 2018?

Or rather, what was going off, and why?

A bunch of factors contributed to this double whammy of airplane excursions. First up, the runway at Yakutsk airport had been shortened for works. It was, in fact, 1,150m shorter – which is quite a significant amount.

There were some Notams published about this, (and pretty decent Notams at that)

What about the airplanes, I hear you ask.

Well, the Sukhoi Superjet 100LR is not included on the list of “can’t land here” airplanes. However, the Notams should have at least given them pause for thought, especially since both of them had technical issues reducing their deceleration performance.

Number 1 “First to Overrun” was found to have significantly worn out tires (which should have been spotted during a walk around), while Number 2 “Also Skidding Through” had a thrust reverser out of action. No big deal, but factors to be considered in the context of the other conditions of the day.

Talking of those conditions – the ATIS was reporting a tailwind of 6kts which is not outside anyone’s limits, and of course 150% of any tailwind is taken into account for landing calculations.

The braking co-efficient, however, was reported as 0.45
Now, ICAO and most national authorities have moved away from reporting measured friction because they decided that, really, it is a pretty useless thing to report. There is not actually any great way to work out how those contaminants on that day will result in whatever friction for whichever aircraft – because there is no way to correlate the measurements a ground measuring device can measure in a meaningful way to what an airplane will actually experience. In other words – it has limited practical use in actually characterizing the runway conditions for an aircraft operation.

To further add to its pointlessness, the 0.45 was not even accurate. The real coefficient measured that day was actually less than 0.3.

As slippery as an oiled-up eel
Now, these pilots did do a landing performance calculation using what they thought were accurate figures. Even with their selection of only medium auto brake, and the mandatory 15% safety margin added in during in-flight performance calculations, the results looked ok and so they gave it a go.

However, had they known the coefficient was only 0.3 then they would hopefully have come up with landing results similar to those calculated during the subsequent investigation. These showed that a Superjet needs about 1,598m on a dry runway, 1,838m on a wet runway and a whopping 3,650m if the coefficient of friction is 0.3. Their 15% safety margin could not even cover the extra distance because of the poor braking action.

So, with one of the reversers out of action, a tailwind, an incorrectly reported friction co-efficient and only 2,248m available for stopping in, poor old airplane Number 2 never stood a chance of stopping in the space available.

What can we take away from this?

Runway Excursions are still in the top 3 most common bad stuff that happens to airplanes, and considering the vast majority are avoidable with a bit of planning, better procedures or common sense, this is fairly shocking.

So, what can pilots do to prevent overruns? 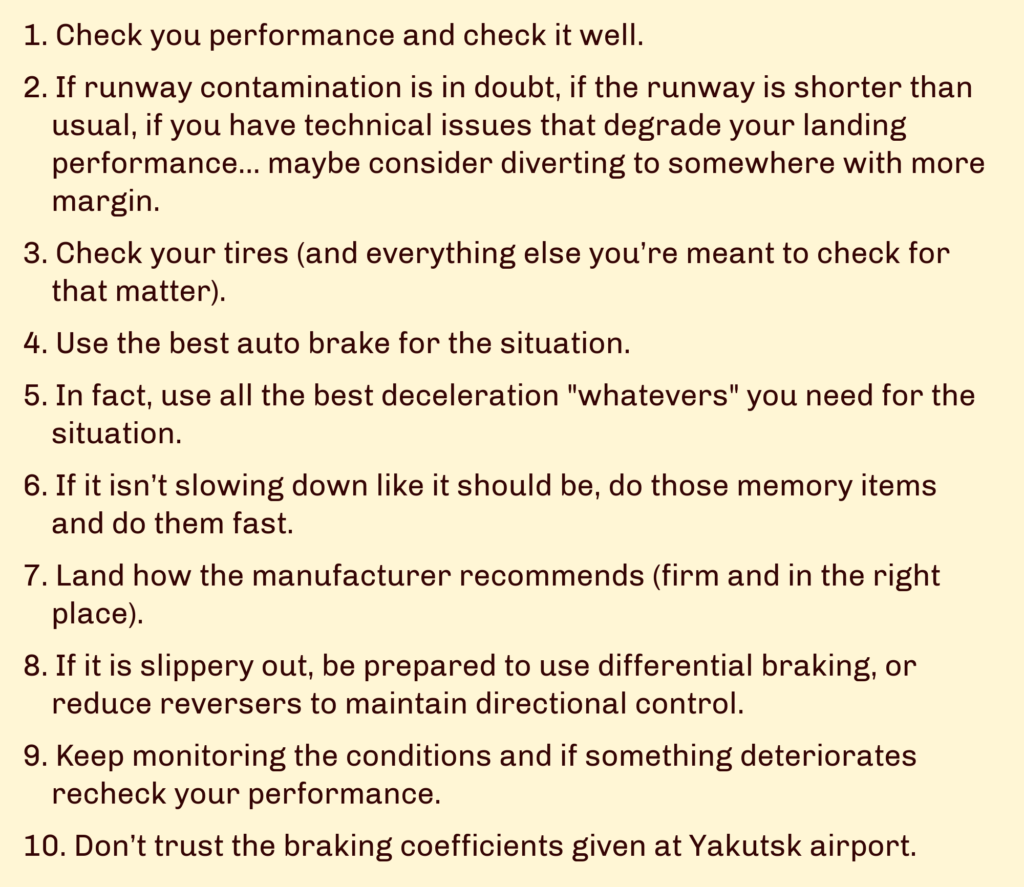 Sometimes brakes do fail, or systems malfunction, and if that happens being ready with your memory items  is the best way to deal with this. They might vary slightly across different types, but the basic actions are probably something along the lines of –

What are manufacturers doing to help stop overruns?
A lot of airplanes have some clever devices installed in them nowadays.

Take Airbus for example. They have their ROW/ROP systems. The ROW bit (runway overrun warning) does useful things like monitoring the conditions in real time, and running speedy little calculations based on the known runway length and aircraft weight to make sure the aircraft is still stoppable in the distance available. If it isn’t, it will yell at the pilot.

The ROP bit (the protection that kicks in after landing) does something similar, and can automatically apply full whiplash effect with the brakes if it thinks you need it, as well as reminding you to “Set Max Reverse!”

Other aircraft have similar systems with warnings that trigger if an aircraft is too fast, or if the landing flare is too long, or the remaining amount of runway is too short…

What can authorities do to stop excursions?
Ensuring operators train crew and staff properly, and that information is distributed in the industry is important.

Airlines and Operators should have in place technical and practical training for their crew to help them have a better awareness of the risks and factors that lead to overruns. Better monitoring of areas like unstabilised approaches which often precede overrun incidents, and contaminated runway and winter operations awareness, is also necessary.

Airports should makes sure Notams about works and changes to runway characteristics are up to date and correct. Giving correct information to pilots about the conditions on the day would also help…

In the US the FAA is advocating the use of  EMAS (engineered materials arresting systems) at airports within insufficient runoff space, and this has apparently prevented the severity of 15 aircraft overruns in the years they’ve been installed.