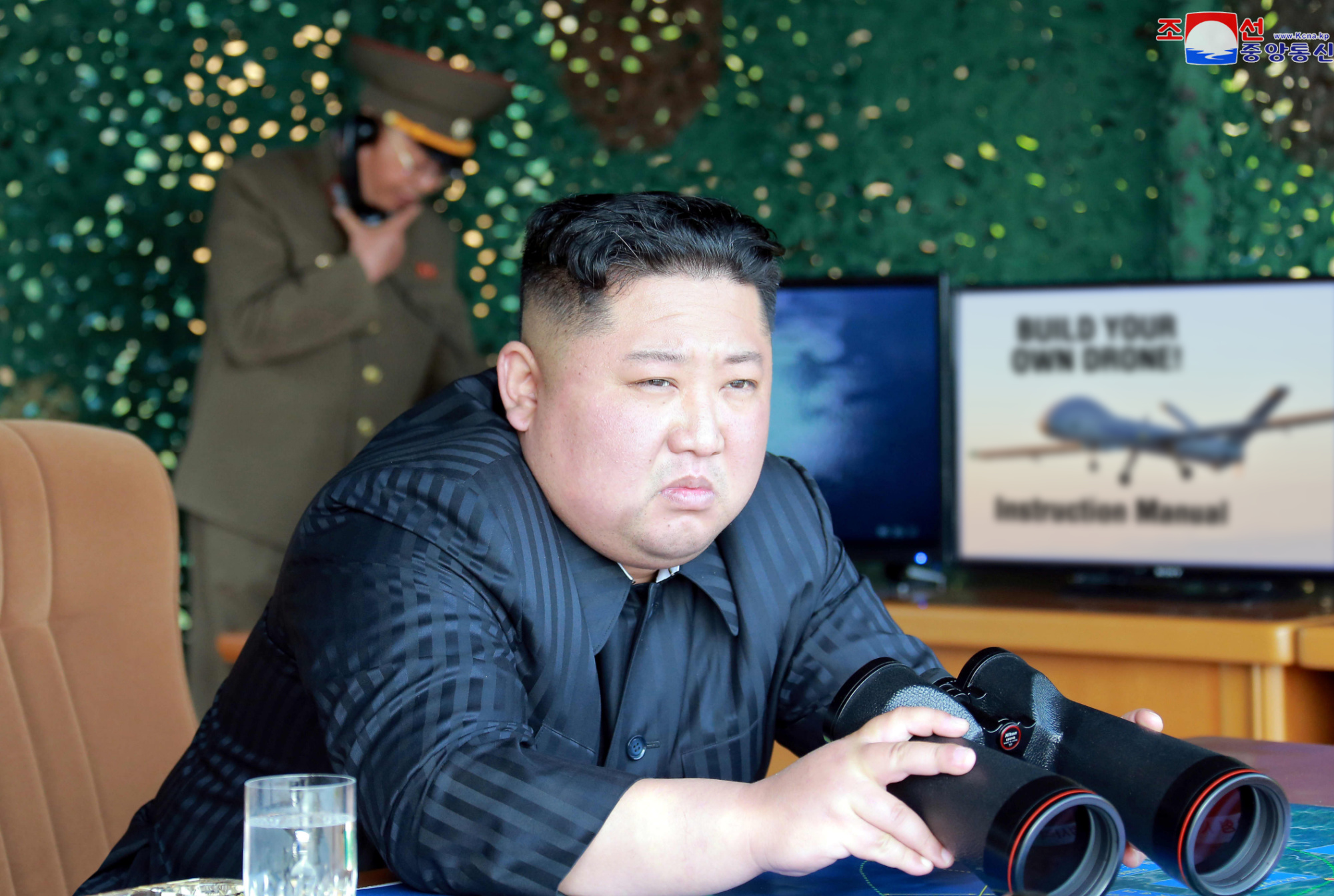 
On Dec 26, several North Korean drones entered South Korean airspace. Ops at both RKSI/Seoul and RKSS/Gimpo were disrupted while military jets were dispatched to intercept them.

While it’s no secret that North and South Korea don’t get along, this is the first drone incursion in the RKRR/Incheon FIR in half a decade. And it didn’t go down well. So much so that there is now talk of ending a military pact that has stood since 2018 – especially if there is another incursion.

From an aviation standpoint, this has potential to spell trouble as it threatens the status of a military no-fly zone that buffers the two countries. In which case, the risk to aircraft in the skies of South Korea could deteriorate quickly – especially anywhere near its northern border.

In the absence of any active airspace warnings, here’s what you need to know.

At around 10:30am local time, at least five North Korean drones entered South Korean airspace over the Military Demarcation Line near the city of Gimpo – just northeast of Seoul.

It appeared to have caught South Korean military by surprise, who temporarily suspended ops at RKSI/Seoul and RKSS/Gimpo to scramble military jets to intercept them. They fired at least one hundred rounds at the drones supposedly as warning shots.

There are no reports that any of the drones were shot down. One returned to North Korea, while the status of the other four isn’t known.

This has attracted some negative shade in the media, where some felt that the military’s response was inadequate. 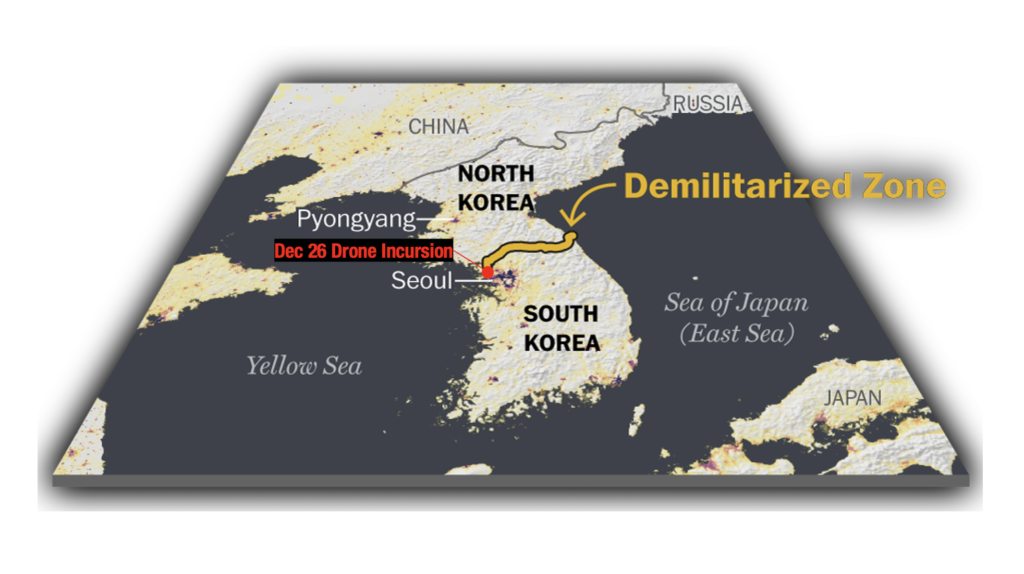 In the days that followed, South Korea responded by sending surveillance aircraft into the ZKKP/Pyongyang FIR. The South Korean president has also said that the drone incident could cast serious doubt on a military pact between the two countries – the one that protects border airspace from military incursions.

North Korea’s recent ballistic missile tests haven’t helped either – in recent weeks several unannounced launches have taken place with scant regard to civil aviation. The past twelve months have seen a huge upswing in these types of incidents, at one point triggering a ground stop on the US West Coast. And they send a very clear message to South Korea. 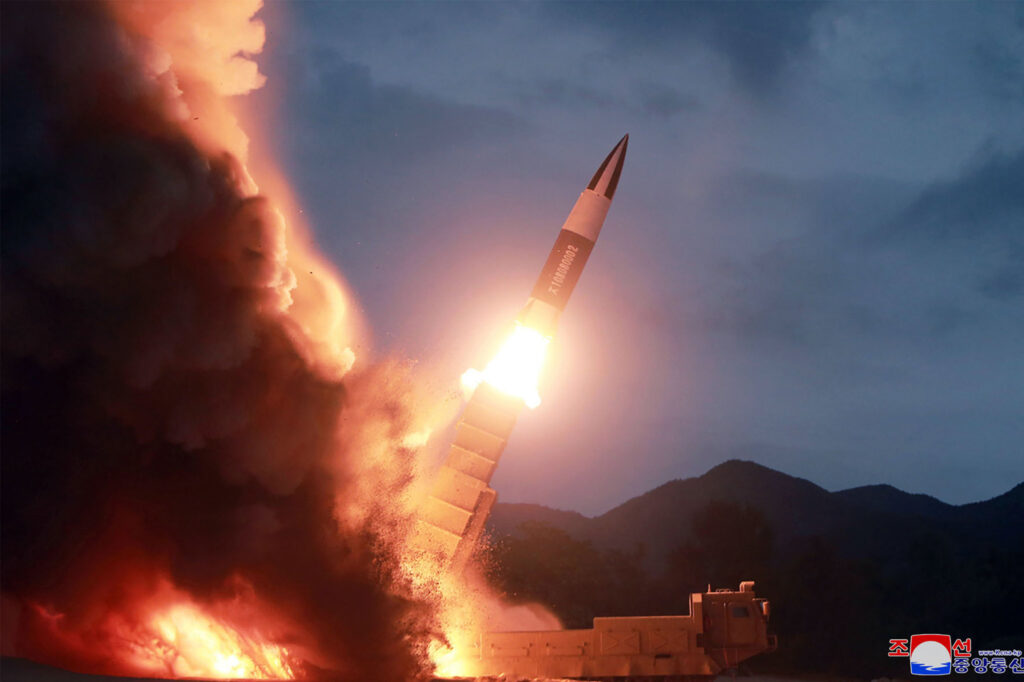 A flurry of North Korean missile tests in December has also increased tensions.

So, are we about to see an outright conflict? Probably not, but ‘quid pro quo’ can be dangerous, especially where airspace is being used as the stage.

Add to that the potential for increased posturing on the border and civil aviation needs to take note. Mistaken identity and mis-targeting is a very real threat. This will escalate should the agreement which upholds the demilitarised buffer zone between them get dismantled.

The FAA has previously had warnings in place for the RKRR/Incheon FIR, but they have long since expired.

The first related to unannounced North Korean missile tests and regional instability. The second was a Notam on GPS interference that was cancelled back in 2019. It was purely advisory – that caution should be taken near the border as the signal may be interfered with.

Since then, things have been quiet. But it is worth keeping in mind that operations in and out of Seoul particularly, are only 30nm away from the demilitarised zone. And beyond it lies the ZKKP/Pyongyang FIR, where US operators are currently banned at all levels.

You can check Safeairspace.net for a summary of the airspace risk, including warnings issued by each country. 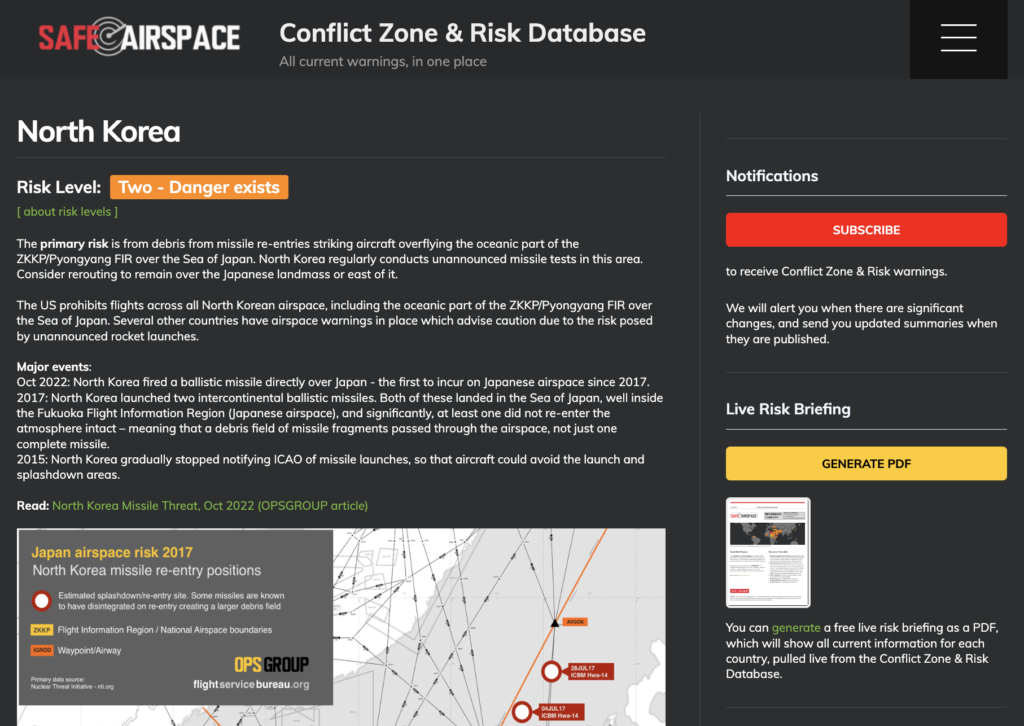 What does the South Korean AIP say?

There is a large area of prohibited airspace which runs along the military demarcation line – a strip of land around 2.5 miles wide which acts as a buffer between North and South Korea more or less defined by the 38th parallel.

No aircraft can enter the area at any level, 24 hours per day. As it is just north of RKSI/Seoul, operators there are advised to give it a wide berth. So much so there is a note to exercise extreme caution in a sector of airspace north of the field. You don’t want to bust it.

As a general rule, the military can impact civil aviation operations without prior notice. This is precisely what went down on December 26.

We watch and wait. Tension on the Korean Peninsula isn’t new – but the December 26 incident is a reminder of just how volatile things can be at short notice. Should the military pact between the two countries genuinely implode, the risk to civil aviation could change overnight.