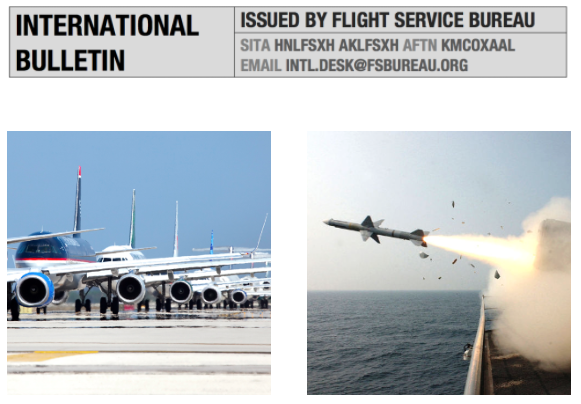 
Thanksgiving ATC Traffic Plan 23NOV The FAA have published details of Traffic Management plans for the east coast of the US during the Thanksgiving holidays, effective 24NOV to 30NOV. The highest volume days will be 25NOV and 29NOV, expect delays on north/south routes to Florida during this period. Read the full details of the airspace initiatives here.

New Missiles Warning – Baghdad FIR 23NOV A NOTAM issued today by the Iraqi CAA indicated anticipated cruise missile traffic across the FIR from the Caspian Sea, leading also to the closure of Erbil Airport until Wednesday. See below for further.

UIII/Irkustk will close the main runway on 01, 08, 15 and 22DEC from 1210-1450Z for repairs, not available as alternate during these times. As this is a common Polar alternate, check NOTAMS for current information.

UEEE/Yakutsk will close 31DEC-02JAN, not available for movements or as alternate after 0500Z on 31DEC.

EINN/Shannon has a runway closure on 23NOV from 2345Z-0500Z, not available as alternate. Caution before using as NAT alternate on this date. If another ETOPS alternate is required, consider EIDW/Dublin, EGAA/Belfast or EGPF/Glasgow.

ORBB/Baghdad FIR Iraq published the following NOTAM (A0413/15) effective today 23NOV CRUISE MISSILES CROSSING NORTHERN PART OF IRAQ, FROM CASPIAN SEA TO SYRIA,NORTH OF REP OTALO,NO CRUISE MISSILE OPS IN THE REST OF ORBB FIR,FLIGHTS OPERATING AT FL310 OR ABOVE AND FLIGHTS OPERATING AT ORBI,ORNI AND ORMM NOT AFFECTED. SFC – 30000FT MSL, 23NOV 0500Z – 25NOV 0500Z. In addition Erbil and Sulamaini airports will be closed until Wednesday.

OLBA/Beirut FIR Initially issued a NOTAM on 20NOV, closing a large part of the FIR including routes G2/UG2 , R219/UR219, L620/UL620, in response to Russia’s request for a training exercise in their airspace. Subsequently the government reversed their decision, and the NOTAM was cancelled on 22NOV, reference A0293/15.

BKPR/Kosovo Airspace to the north of Kosovo was released from UN/KFOR restriction, to Serbian control, on 20NOV, meaning that arrivals and departures from Europe will no longer have to make a circuitous approach and can depart to the north. Procedures are not yet in place, but technically the airspace is no longer restricted. For most operators this will see a route saving of up to 100nm.

GABS/Bamako, Mali. With great sadness we must report that 6 crew members of Volga-Dnepr Airlines were amongst those killed in the attack on the Radisson Hotel in Bamako on Friday.

KXXX/USA Thanksgiving Holidays 26NOV and 27NOV leading to increased traffic flows across US, but anticipated reduced traffic across the NAT region.

FJDG/Diego Garcia Parking Stands A6-11 and B4-8, as well as some taxiways, closed for repair effected 19NOV.

GCCC/Canarias FIR will have a HF outage today 23NOV from 0900-1500Z. In case of non-contact, use CPDLC, or HF via Santa Maria or Sal for relay.

LFEE/Rheims ATC Strike 23NOV/0500Z – 28NOV/0500Z Confirmed for Monday only at this time – NOTAM F2093/15 refers. AOs are advised to reroute, avoiding LFEE area of responsibility. Those that are not able to reroute may expect delay.

RJJJ/Japan FIR will have a comms outage affecting Flight Plan filing on 25NOV, from 1410-1720Z. To avoid delays and missing plans, Flight Plans should be filed earlier than normal to RJJJZQZX for overflights and landings. Refer to J7545/15 for specifics.

SPJC/Lima, Peru Effective 12NOV the Location Indicator for the main airport in Lima, Jorge Chavez, changes from SPIM to SPJC.

TTZP/Piarco ATC has issued a request for operators to include KNYCZZZX when filing plans entering New York Oceanic airspace from the Piarco FIR, or operating east of 58W within the Piarco FIR, in order that New York has details of the aircraft.

With regard to business aviation, but equally interesting for airlines and private operators, the NBAA has published a useful list of the Top10 Issues for International Operators in 2016.