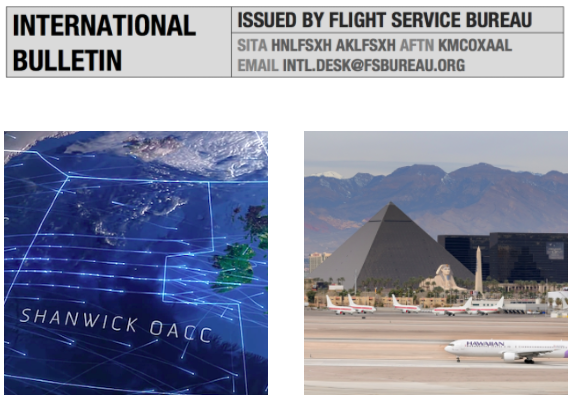 
NAT Tracks Change Postponed 16NOV The planned implementation of reduced separation in the Organised Track System (OTS) has been postponed. During final testing, a software issued was identified by ATC, and as a result the previous track structure remains unchanged. New waypoints introduced on 12NOV are useable. A revised implementation date is expected to be announced today, 16NOV.

KLAS/Las Vegas restrictions 17NOV Increased traffic from Monday 16NOV due NBAA Conference. Special Procedures in effect from 14NOV-23NOV affecting KLAS, KHND, and KVGT, refer to this NBAA link for details. If you are visiting the NBAA Conference, you can meet the Flight Service Bureau team at stand C12050 in the Central Hall, and collect your free show pack.

KAUS/Austin A technical problem with ATC equipment in the Austin Tracon will likely lead to delays today; service is being provided by Houston Centre instead, with a Ground Delay Program planned to manage capacity.

KLAS/Las Vegas Increased traffic from Monday 16NOV due NBAA Conference. Special Procedures in effect from 14NOV-23NOV affecting KLAS, KHND, and KVGT. Refer to https://www.nbaa.org/events/bace/2015/air-traffic/. If you are visiting the NBAA Conference, you can meet the Flight Service Bureau team at stand C12050 in the Central Hall, and collect your show pack (you can reserve one here).

KXXX/USA Several incidents reported of laser beams pointed at aircraft, on 13NOV Southwest and American were targeted at KPHX/Phoenix, and on 11NOV three aircraft at KDAL/Dallas Love were illuminated.

KXXX/USA Snowbird 2015: The FAA have published details of Traffic Management plans for the east coast of the US during the Thanksgiving holidays, effective 24NOV to 30NOV. The highest volume days will be 25NOV and 29NOV, expect delays on north/south routes to Florida during this period. Read the full details of the airspace initiatives here.

EINN/Shannon Has an overnight runway closure. from 17NOV-20NOV 2300-0500Z for essential maintenance. If another ETOPS alternate is required on these nights consider EIDW/Dublin, EGAA/Belfast or EGPF/Glasgow.

LFXX/France A Notam issued Friday (A4850/15) regarding Border Controls remains in place, in practice the Notam is a reminder to airlines of existing requirements only. Expect delays due security checks at all French Airports, and many closures of public buildings and transport systems in France.

VLVT/Vientiane, Laos has reopened after a runway closure on 13NOV due to a disabled aircraft. An MA60 had aquaplaned and partially blocked the runway.

MNXX/Nicaragua closed its border with Costa Rica on Sunday 15NOV in response to the wave of Cuban migrants moving northward to the United States. Costa Rican officials had previously issued transit visas to approximately 1,200 detained Cuban refugees at the Panamanian border. One Cuban migrant stated that there were approximately 2,000 Cubans waiting on the Costa Rican side of the Nicaraguan border.

PAZA/Anchorage FIR Two new waypoints have been added for Polar operations. Those waypoints are LETUN and BAREK.

LFxx/France ATC Industrial action planned for 17NOV has been cancelled.

LIxx/Italy FIR There has been a call for an Italian National Strike, including ENAV ATC personnel, on 24NOV 1200-1600 UTC. More information will be posted as soon as it is available.

PLCH/Christmas Island As per NOTAM A1581/15 Jet A-1 fuel limited in supply. Sched flights to minimize fuel uplift on arrival or maximize tankering into PLCH. Tech stops cannot be made. In effect until 04DEC.

PKMJ/Marshall Island Construction is planned at the eastern end of RWY25; authorities have notified expected delays of up to 30mins including airborne holding.

FMEE/Reunion Airport will be closed from 16NOV-28NOV on Mon, Weds, Fri for surface work. Airfield cannot be used as an alternate except in case of emergency. All traffic services will be provided normally for all aircraft crossing La Reunion TMA. Refer to NOTAM A1452/15.

FAA The FAA is rolling out Controller Pilot Data Link Communications-Departure Clearance (CPDLC-DCL). Currently, only George Bush Intercontinental Airport in Houston, TX (IAH), William P. Hobby Airport in Houston, TX (HOU) and Salt Lake City International Airport in Utah (SLC) are operational, however, the FAA plans to bring 56 airports online by the end of 2016. KTEB/Teterboro is scheduled to be operational by the end of MAR2016.