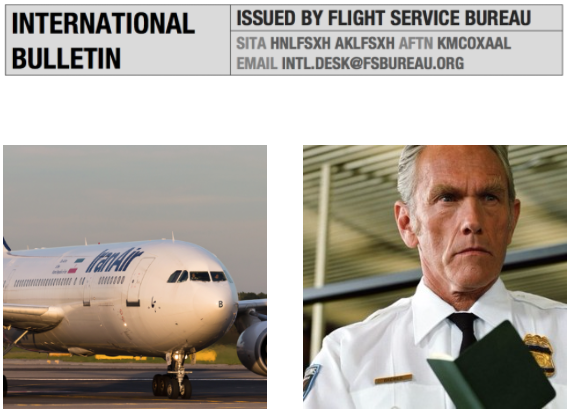 
Saudi Arabia and Bahrain ban flights from Iran 11JAN Bahraini and Saudi Civil aviation have banned flights between Bahrain, Saudi Arabia and Iran. The Bahraini Civil Aviation Authority (BCAA) stated that it will work to resolve any disruptions as a result of the ban. Bahrain previously cut diplomatic relations with Iran, following the attack on the Saudi Embassy in Tehran.

New US Visa Waiver Restrictions 11JAN Several changes to the rules for the US Visa Waiver program are now in effect, restricting the moment of travelers having visited Iran, Iraq, Sudan, or Syria in the last 5 years. Read more …

NFFN/Fiji A report released by the Disaster Management Office on 4 January 2016 stated that Cyclone Ula caused minor damage to Fiji. While the storm blew away iron roofs in Ono-i-Lau and Kabara islands, it did not cause significant structural damage or loss of life.

SBxx/Brazil Tourists from Australia, Canada, Japan and the United States will be eligible to travel to Brazil for the upcoming Olympics without a visa for up to 90 days for visits between 01JUN and 18SEP16, though no extensions will be available. Proof of Olympic attendance is not required for this visa waiver. Business travelers from these countries will still require business visas during this time. Eligible travelers should be sure to confirm the validity of their travel documents prior to their trips. After 18SEP, tourists from these countries will require tourist visas for entry.

LFLL/Lyon Due to industrial strike affecting fuel providers at LFLL (Lyon Airport). Aircraft Operators have been asked to tanker in enough fuel for a round trip. LFLL Airport can also not be used as alternate until 12JAN.

Cxxx/Canada Nav Canada has issued AIC 3/16 advising of a pending change to the credit that may be taken at alternate aerodromes for lateral navigation/vertical navigation (LNAV/VNAV) minima, when the aircraft is certified for barometric LNAV/VNAV.

KPHX/Phoenix Possible arrival and departure delays are expected on 12JAN due to extra passenger volume the day after the Alabama and Clemson football game. The airport expects an extra 30,000 departing passengers that day, boosting the total number of passengers to 150,000. In addition to regularly scheduled flights, at least 14 charter flights will depart.

Kxxx/Southern California SpaceX has scheduled a launch for Jan. 17. This launch will take off from Vandenberg Air Force Base in California. Please check local NOTAMs with KZLA (SOCAL) and KZOA (Oakland Oceanic) for any airspace closures.

Zxxx/China Chinese officials stated that they will allow departing flights to transit via Taiwan. Aviation officials will allow flights departing from Chongqing, Nanchang and Kunming to transit through Taipei’s Taoyuan International Airport (RCTP/TPE).

Fxxx/Madagascar On 7 January 2016, Malagasy health officials reported statistics in an ongoing outbreak of the bubonic plague. Reports indicate that 63 fatalities and a total of 174 cases have been recorded since August 2015. Madagascar first alerted the World Health Organization (WHO) to this outbreak in September. A previous outbreak in 2014, which lasted until early 2015, resulted in 335 cases and 79 fatalities.

Dxxx/Nigeria The Nigerian Civil Aviation Authority (NCAA) has lifted the suspension it recently imposed on Acorn Petroleum Limited from supplying aviation fuel to domestic and foreign airlines at airports in the country. NCAA had suspended Acorn and four other oil marketing companies from supplying aviation fuel to local and foreign airlines operating in the country.

Vxxx/India The Indian government has approved a Memorandum of Understanding on Civil Aviation between India and Singapore.