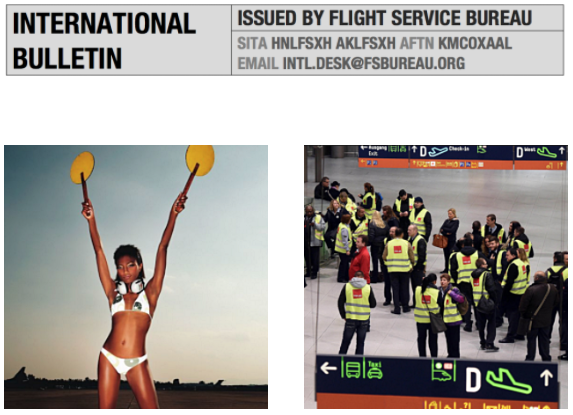 
Your Attention Please 18JAN As we reach 25,000 readers, your help is requested. We want to make sure we’re delivering the best bulletin to you, so if you have a few moments, please answer 3 questions. You’ll receive a gift token for use in the Flight Service store.

FJDG/Diego Garcia is closed from 15JAN to 19JAN.

WSSS/Singapore 2016 Airshow takes place 16-21FEB at Changi. Planning for parking, accommodation and when required permits should be arranged as early as possible.

LSZH/Zurich Delays this week due to World Economic Forum in Davos.

KMCO/Orlando A two-phase runway construction project at is scheduled to begin 12JAN and continue into April 2016. Runway 17R/35L will be closed during phase one, and Runway 18L/36R will close during phase two.

NZxx/New Zealand The Aviation Security Officers Union advised on 14JAN of a possible strike. The union identified no date for the possible strike. Airport officials stated that if security officers strike, the air transportation will come to a standstill nationwide.

VIDP/New Delhi Airspace closed to commercial flights for more than an hour every day beginning next week in view of the Republic Day celebrations. 1035-1215 local, on 19-24JAN, and 26JAN.

West Africa The World Health Organization announced last week that the Ebola epidemic in West Africa is officially over. For the first time since the outbreak began in December 2013, all three of the hardest-hit West African nations — Liberia, Guinea and Sierra Leone — have had zero reported cases of Ebola for 42 days in a row, a period equal to two full incubation cycles of the virus.

VHHH/Hong Kong According to reports on 13JAN, thieves targeted a South African national aboard South African Airways flight 286 from Johannesburg to Hong Kong on 21 December. The victim stated that a fellow passenger alerted him that other passengers had taken his baggage while he was sleeping and rummaged through it in the aircraft lavatory. When the victim subsequently inspected his baggage, he found that the lock had been broken and foreign currency worth approximately $1200, as well as items of jewelry, were missing. Hong Kong police officers searched several suspects when the aircraft landed, but the stolen items were not found. This type of crime is reportedly a significant problem on international flights bound for Asian destinations, particularly Hong Kong. According to statistics released by Hong Kong authorities in August 2015, a total of 45 in-flight robberies had been reported up to that point in 2015; 48 cases occurred in 2014. Cash, jewelry and smartphones are especially targeted.

Int Ops Bulletin As we reach 25,000 readers, your help is requested. We want to make sure we’re delivering the best bulletin to you, so if you have a few moments, please answer 3 questions. You’ll receive a gift token for use in the Flight Service store.