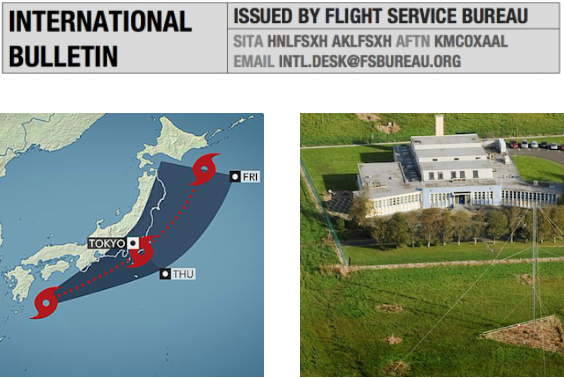 
Typhoon for Tokyo 07SEP Tropical Storm Malou is tracking towards Tokyo and expected to intensify. Multiple Japanese airports are likely to be affected … Read the article

HHZZ/Eritrea The US State Dept has issued a Travel Warning for Eritrea which warns of the risks of travel to Eritrea due to the unpredictable security situation along Eritrea’s borders and restrictions imposed by local authorities on travel within the country. All foreign nationals, including U.S. government employees, must obtain permits to travel outside of the capital Asmara. This restriction limits the ability of the U.S. Embassy to provide consular/emergency services anywhere outside of Asmara. This replaces the Travel Warning dated May 6, 2015. Avoid travel along all border regions. In June 2016, fighting in the Ethiopia-Eritrea border region reportedly caused several deaths. Continued political and military tensions between Eritrea and the neighboring countries of Djibouti and Ethiopia pose the threat of possible renewed conflict. Due to regional sensitivities, the State Department also recommends against travel to the border region with Sudan.

WSSS/Singapore will be super busy during the Grand Prix weekend 14-18SEP. Ask for a slot before operating, if you don’t get one, use Seletar instead.

RPLL/Manila has a couple of new procedures for non-scheduled flights. First, traffic arriving between 2200-0400Z daily – the peak period – should look for a slot from Manila FSS – who are at mfss.staff@gmail.com, or call 2 944 2098/99. Once you have the slot, get your EDCT from Manila ATC. If operating domestically, file the flight plan between 2 and 24 hrs prior departure.

DNBC/Bauchi is a new airport designator in Nigeria for the Tafawa Balewa International Airport.

VLVT/Vientiane, Laos The 28th and 29th ASEAN Annual Heads of State Summit is being held in Vientiane from 5 to 9 September; there will be road closures and delays in arrivals and departures of both international and domestic flights at Wattay International Airport.

FOZZ/Gabon has seen multiple security warnings in the last few days, following a disputed election result. Widespread, violent demonstrations, rioting, looting, and road blocks continue, both in Libreville and other cities throughout Gabon. At this time the airport in Libreville is open and operational and commercial flights are available. The US Embassy recommends U.S. citizens remain in a safe location and avoid non-essential movement.

EKOD/Odense will be closed on 22SEP due to an event. Jet fuel not available. You can email twr@hca-airport.dka for further.

LZIB/Bratislava will required slots for all operations 15-17SEP, small GA aircraft not welcome on these days. Email slots@bts.aero.

FNZZ/Angola The WHO has provided an update on the yellow fever outbreak in Angola and the Democratic Republic of Congo (DRC). The WHO estimates that there have been 6,000 suspected and 1,000 laboratory confirmed cases of yellow fever since the outbreak began in Angola in December 2015. More than 400 people have died from the mosquito-borne disease since that time. However, the last confirmed case in Angola was on 23 June and in the DRC was on 12 July, which the WHO believes is an encouraging sign. Nevertheless, the organization still characterizes the outbreak as “serious” and as requiring “sustained, controlled measures.” Thus far, 22 million people in Angola and 14 million people in the DRC have received vaccinations against yellow fever as part of a large-scale initiative that was prompted by this outbreak.

URRR/Rostov wins the prize this week for clogging up the Notam system; the runway there is closed 29 times between now and October 21st, and they have therefore issued 29 Notams. Perfect.

SPQU/Arequipa, Peru is not allowing overnights until 11SEP due capacity. Non-scheduled flights limited to 3 hours parking.