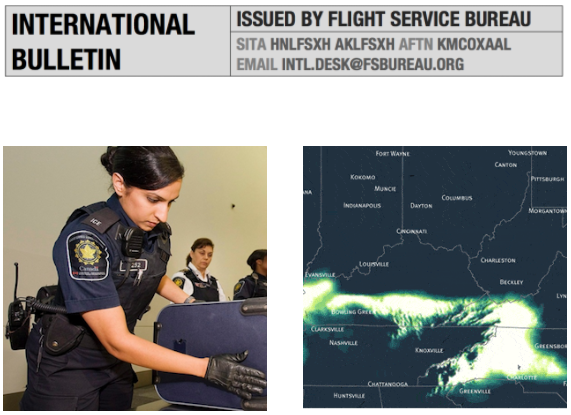 Winter Storms clear Newfoundland 10FEB Nova Scotia and Newfoundland (CYQX, CYHZ, CYYT) have two severe Winter Storms passing through this week; Halifax will see up to 40cm of snow, affecting diversion choices on the North Atlantic. The visualisation above shows the US Winter storm at the end of January.

MKJK/Kingston FIR Jamaica, has ongoing issues with radar coverage and serviceability, leading to ad-hoc flow management procedures including 15 minute en-route separation, and 10 minute arrival separation at international airports. Latest update indicates this will continue throughout February. We have had several reports from international airlines of delays averaging around 1 hour on departure. Further reports welcome to bulletin@fsbureau.org.

SKED/Bogota ACC, Colombia is applying 20 minute spacing for northbound flights heading into Jamaican airspace due to the increasing delays there.

SPIM/Lima FIR Peru have published new Aircraft Interception procedures for Civil Aircraft. Probably worth a look – although, we must warn you, they are in Spanish only, and exceptionally lengthy. Maybe just double check that overflight permit and keep in touch with ATC instead.

North Atlantic As mentioned last week, effective 04FEB MNPS Airspace is replaced by HLA/High Level Airspace on the North Atlantic. A popular topic. RNP4 or RNP10 now required. Read our International Ops Notice 01/2016 or our blog post: Did you know MNPS is over?

NVVV/Port Vila, Vanuatu Several airlines have suspended operations here effective 01FEB16 over concerns as to the condition of the runway. Airport remains open without restriction.

PACD/Cold Bay has no Jet A1 Fuel avaiable until 29FEB

North Korea launched a long range rocket at 0031Z on 07FEB. According to preliminary reports, the rocket passed over the Japanese island of Okinawa and landed in the Pacific Ocean. US military officials stated that the rocket did not pose a threat to the United States or allies in the region. South Korean media reported that North Korea is preparing for another nuclear test and has the technology necessary for an inter-continental ballistic missile (ICBM).