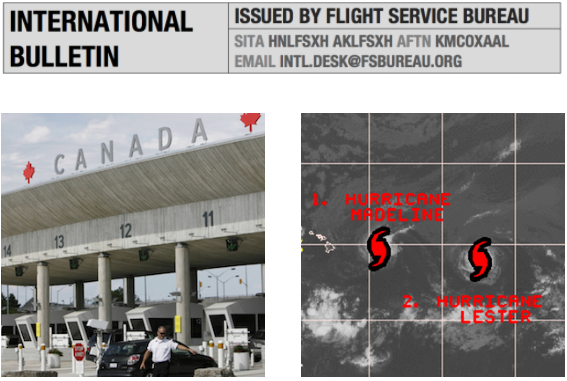 
End of Canada Leniency 31AUG Earlier this year Canada introduced a requirement for an eTA – like the US Esta. For a while, it was OK to travel without one. That’s ending in September … Read the article

Two hurricanes inbound Hawaii 31AUG Madeline is first, followed by Lester – both are tracking west towards Hawaii with landfall expected – should it occur – on Wednesday and Thursday. Read the article

LTCC/Diyarbakir, Turkey Kurdish militants fired rockets at Diyarbakir Airport in southeastern Turkey. The militants reportedly targeted a security check-point outside the airport lounge. All personnel were taken inside terminal building for safety reasons. No flights were disrupted, and there were no reports of casualties.

EHAM/Amsterdam It’s that time of year again, watch out for the migrating geese in Amsterdam at sunrise and sunset. They operate between 300 and 700ft without transponder.

VVVV/Hanoi FIR If you’re cutting a line through the Hanoi FIR on the W1 airway, you’ll be held down at FL290 unless you have RNAV5. ATC says so.

DNZZ/Nigeria Members of aviation unions staged rallies at four major airports in Nigeria to protest the planned concession of the facilities to private investors. Protests occurred at Abuja (DNAA/ABV), Kano (DNKN/KAN), Lagos (DNMM/LOS) and Port Harcourt. So far, the protests have not disrupted ops. Lagos has been suffering from some power outages lately as well.

OIZZ/Iran has approved the use of its airbases by Russian fighter aircraft; Russia has notified intention to launch missiles in the direction of Syria from the Caspian Sea fleet. The Russian Air Force has deployed six Tu-23M3 BACKFIRE bomber aircraft and multiple Su-34 FULLBACK strike fighter jets to Hamedan Air Base (OIHS/NUJ).

ORBB/Baghdad FIR/Iraq The Iraqi government has given permission to the Russian MoD to use its airspace in support of air operations in Syria. Russian media outlets are also reporting the Russian MoD has requested use of the FIR for the “passage of cruise missiles” as well, highlighting the potential for such activity to occur in the coming days from the airspace over the Caspian Sea.

HAZZ/Ethiopia Reports indicate that flights to HAGN/Gondar (GDQ) and HABD/Bahar Dar (BJR) have been indefinitely suspended. The suspension of flights comes amid ongoing unrest in Gondar and Bahir Dar, as well as in other cities in the Amhara and Oromia regions, over the marginalization of ethnic groups by the Tigray-dominated Ethiopian People’s Democratic Front (EPRDF) regime. Ethiopian government officials have not commented on the cancellation of flights to those cities or international flights to Addis Ababa, which has not been largely affected by the unabated unrest occurring in outlying regions.

WSSS/Singapore air quality has deteriorated to a Pollution Standards Index (PSI) of 105, due to the cross-border haze from Indonesian slash-and-burn fires. The agricultural practice, during which farmers burn a patch of land in order to clear land for new crops, creates haze, which then drifts through the region. Experts believe the level of pollution — which in 2015 cost the region more than 700 million US dollars in damage and severely disrupted the aviation sector — will be lower in 2016 due to a rainy dry season.

NFNA/Suva, Fiji is closed during September for runway repairs. Available wirh 30 mins PN in an emergency. Call them on 9906102.

SUEO/Montevidedo Air Traffic Controllers strike until end of September, closures and departure restrictions in place. Info is sketchy, got some updates? Let us know … bulletin@fsbureau.org.