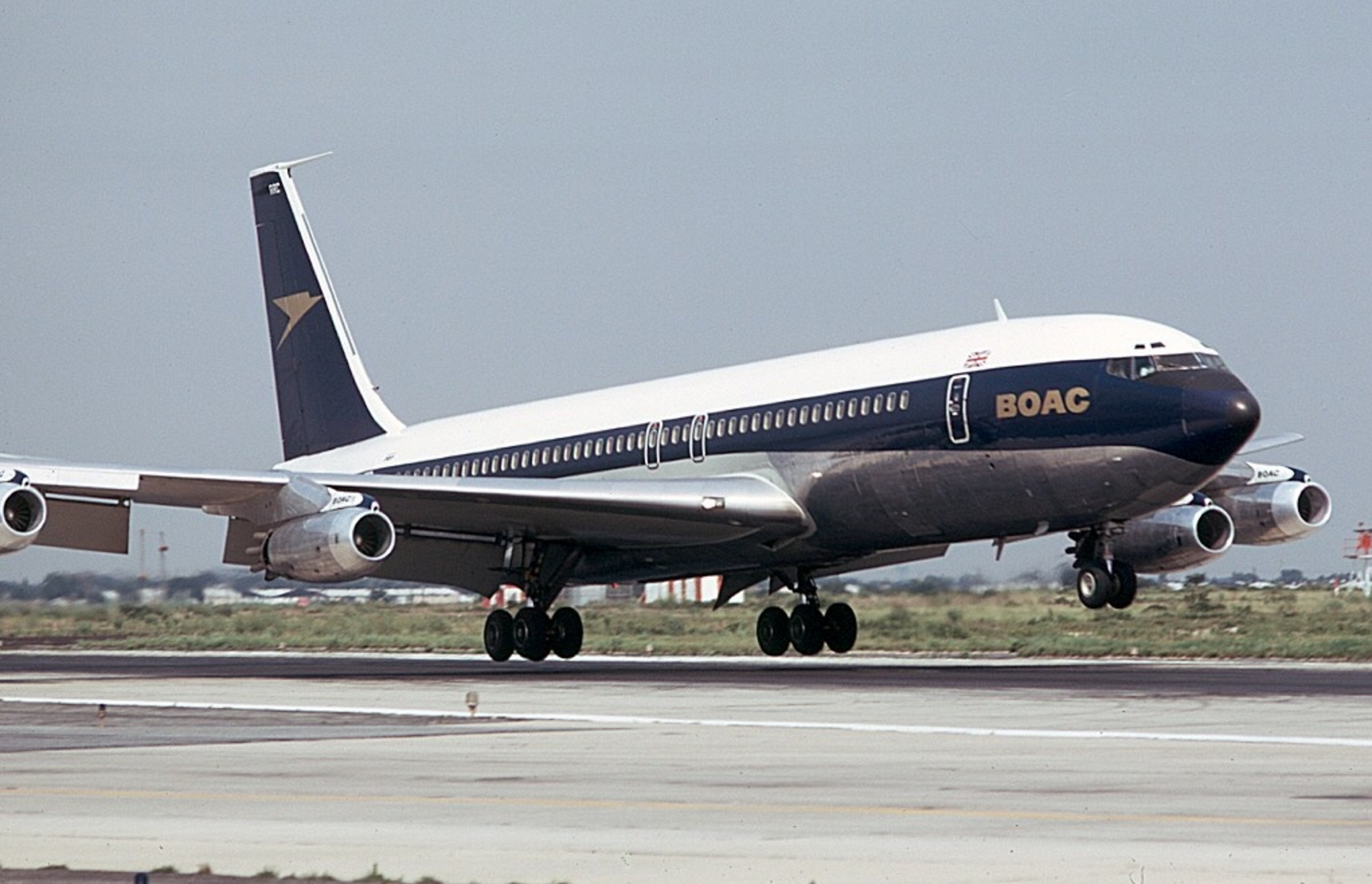 
We’ve sent out a lot of updates in the last 12 months about changes on the North Atlantic; if we go back 45 years you’ll see that navigating was a little different – but for all that has changed, much is still the same.

This Flight Log is from the Delivery Flight (KSEA/Seattle-EGLL/London Heathrow) of Boeing 707 G-APFN, which took place on 18NOV1960.

Home via the Pole

Our take-off weight was 130,500kg, of which 72,000kg represented full tanks. We needed, with all allowances, 66,500kg of fuel for the 4,210 n.m. flight. Estimated flight time 8hr 42min on a minimum-time track, with average +24kt wind component, calculated by BOAC’s New York dispatching office and received in Seattle by telephone. The 72,000kg of fuel would give us 11 hr 48 min endurance.

Track: Carmi, Churchill, Frobisher, 64°N at 50°W, 56°N at 10°W, Bush Mills, London. Flight level 330 to 90°W, 370 to 20°W, then 410. Take-off about 1700hr local, 0100Z (GMT). Take-off clearance: “Climb on runway heading to 3,000ft: left turn to heading 340° to intercept 030° radial of Seattle VOR: climb NE-bound until 15,000ft via direct Carmi: maintain flight level 330. Transition height, 24,500ft because of the mountains. Gets dark during climb, red rotating beacons reflecting off pods; flight deck almost Christmas-like in red and white lights on grey panels: everyone head-down working hard, except pilots peering into night sky. We press on to cruising height, mostly using DR plot and scattered NDBs with occasional VOR. Talking to all sorts of stations on VHF and HF, asking for position reports to be passed to BOAC at Montreal.

0445Z: Note from co-pilot Lee, “Leeway is defence radar at Frobisher: we saw their lights on the ground: have now returned to compass steering: will get radar fix on No 2 VHF at about 0455Z: now reporting to Goose on No 1 HF.” Our report, read from a form, gives estimate for 64°N, 67°W as 0509Z, the wind found, fuel state and consumption, speed, ETA for London and much besides. Goose asked to repeat to Gander and Montreal for BOAC, to Sondrestrom for ATC. Sondrestrom cannot understand, so Goose changes HF frequency to try again. “Leeway” fixes us by radar at 120 miles. SAS and two other BOAC aircraft talking on HF. Navigator plotting all the time; engineer fills in fuel tables every 5,000kg, about every 40min. Pressurizing on one turbocompressor and two direct engine bleeds.  We call Prestwick on HF, apparently without reply. 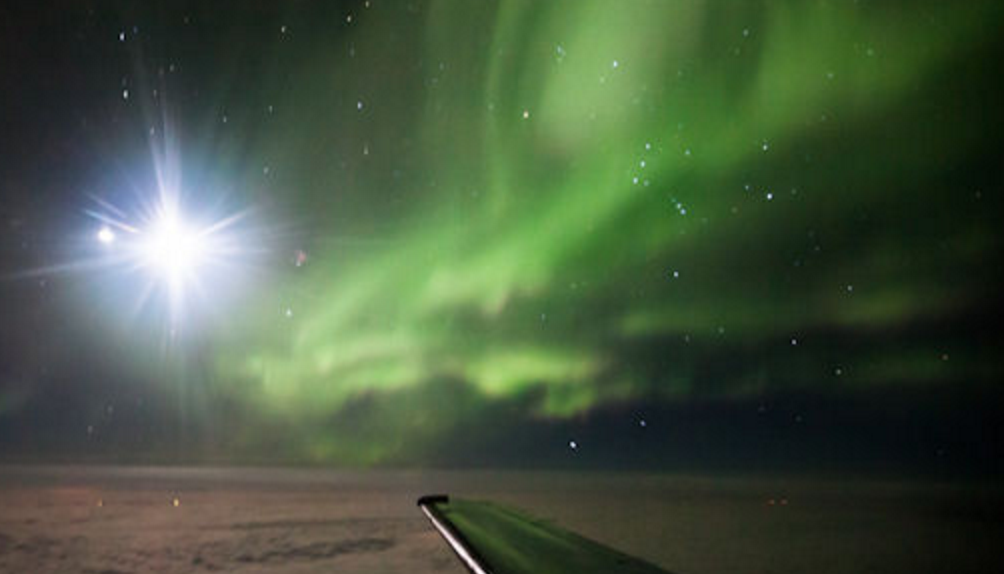 0530Z: Northern lights sneak up again. ADF tuned to Kook Island NDB, mid-west of Greenland, and we see its lights below. Whoever lives there? No. 2 ADF getting Christiansund NDB, 320 miles away on southern tip of Greenland. At 37,000ft: TAS 475kt; two minutes up on ETA; winds northerly; engines at 88 per cent r.p.m.; radar tilted down 7° for mapping.

0625Z: At 35°W and 37,000ft. Hope to climb at 30″W. Three min ahead of plan. No VHF contacts. Iceland cannot hear our HF, so relaying via Sondrestrom. Expect to contact weather ship on VHF at 0645 and get fix. Nearest to Iceland at 0700. Many other aircraft south of us calling Gander. Receive HF weather broadcast from Shannon giving shallow fog for most British airfields; also Canadian maritime weather broadcast from Gander. Frobisher has a 9,000ft runway good for a diversion. Our point of no return relates to Gander. But now we have the feel of the other side and are heading south-east for Britain. 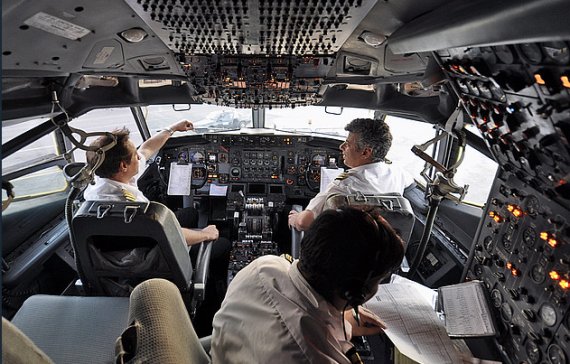 0800Z: Wake with a start from sleep to see a hard yellow, copper and pale green dawn rising over us. Still making 480kt true on 132°. ATC has held us down to 37,000ft; passing 10°W and estimating Bush Mills at 0830Z. Windscreen frames now thickly coated with frost. The sun begins to shine dazzlingly straight in at the windscreen, and shades are down, lights turned low. Outside temperature — 48 °C. Captain still in seat. Navigator makes complete table of airways check-point ETAs for Red 1 and Amber 1 via Belfast, Isle of Man, Wallasey, Lichfield, Daventry, Beacon Hill and Watford to LAP’s runway 28R.

Descent to begin at 0852 and to last 24 min at mean TAS of 364kt, using 800kg fuel. Engineers plan pressurization management between bleeds and turbos when throttled back on descent. ETA London 0916Z with 19,000kg of fuel remaining at 1,000ft. The tip of Ireland is painting well on radar at 60 miles. Sun is blinding. A leaden sea visible between dollops of cloud thrown almost up to our level in polar maritime cold air. IAS 250kt; M0.82; r.p.m. 88 per cent; o.a.t. — 48 °C; cabin height 6,000ft. Navigator hands time plot to co-pilot and relaxes slightly. HF weather reports in French. Cillard RAF radar (in Scotland?) has us. English voices, clipped and calm in welcoming efficiency.

0900Z: The Pennines lava-like in valley fog and snowy tops. Joddrell Bank telescope like a deployed parachute far below. Atlantic charts and manuals being cleared away. Pass Lichfield, estimating Daventry at 0907, tuning beacons, change to London control. 250kt i.a.s., jolted in rough air. Daventry at 0907, estimating Beacon Hill at 0913. Cleared to flight level 190. Watford on No 1 ADF, Dunsfold on No 2 ADF. Find Beacon Hill by Flying Dunsfold range leg to a bearing from Watford. Under London radar surveillance from Daventry. Cleared to flight level 080. Don’t confuse Beacon Hill with Woburn, check with ADF. l,000ft/min now at 150. Wheels rumble down for airbrake effect, slow to 200kt at 2,500ft/min; trying to make Watford at 8,000ft. Over Watford at 11,000ft radar takes us straight on to a southerly lead-in for ILS, asks our rate of descent.

We surge in past the lights, the captain cuts the autopilot and holds off. When I think we are still 100ft up, the main wheels touch smoothly, the nose comes down, spoilers are popped out, reverse thrust pulled. Further end of runway still out of sight. The captain takes the nosewheel tiller and starts braking while the co-pilot holds the column forward and calls the decreasing speeds down to 60kt. We turn off with some runway to spare, switch to airfield control frequency. Shutting down checks begin.

This is an exerpt from an article originally published by Mark Lambert in Flight International in 1960.