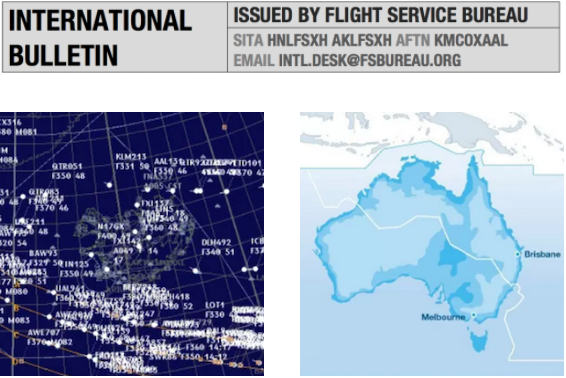 
Reykjavik Oceanic Closure 11MAY Operators planning eastbound flights across the NAT should be aware of a NOTAM issued earlier by Reykjavik Oceanic/Iceland ATC, that essentially asks traffic to avoid the airspace wherever possible, due to further ATC Industrial Action. Read the article.

Australia to turn off Navaids 11MAY On 26MAY, Australia will switch off around 180 different VOR’s, NDB’s, and other ground-based Navaids. All international operators will be required to have GNSS/GPS as primary navigation. Read the article.

CYMM/Fort McMurray, Canada is closed due to Forest Fires; only emergency and evacuation flights are allowed.

EGPX/Scottish Expect delays from 17MAY when controllers change to a new ATC system. ATC advises a fundamental level of change in the method of operation within Scottish Upper Airspace will result. There is no change to the Oceanic Operation, and Domestic CPDLC will be available at all times from 17MAY.

KATL/Atlanta closed one of its three security checkpoints in the domestic terminal for three weeks and will reopen 25MAY. They have added additional security lines to the other 2 checkpoints in hopes of reducing the impact. Plan for extra time if you are heading through ATL in the next few weeks.

LGZZ/Greece An update on 09MAY was issued for the slot allocation Rules and Guidelines for all Greek Coordinated Airports. The updated document can be found at GABA report.

YZZZ/Australia CASA has issued clarification as to who is responsible for Terrain Clearance when ATC instructs an aircraft to “resume own navigation”. Consistent with ICAO standard, while under radar vectors below the MSA, ATC assumes responsibility for Terrain Clearance. The AIC is worthwhile refresher reading as this applies to most International Ops.

OYRN/Mukalla has reopened after it was recently re-captured by government and Emirati soldiers. It is currently only accepting humanitarian and aid flights.

HKIS/Isiolo is a new airport in Kenya that will be operational in early JUN. The new facility will cater to domestic and international flights and will have annual passenger capacity of 125,000 and a 1400m runway. Isiolo is located near many national reserves, approximately 125 mi/200 km northeast of Nairobi.

LIZZ/Italy Another ATC Industrial Action in Eurore has been announced for 14MAY, this time in Italy and affecting only part of operational personnel. Only some air navigation services may be affected. The following NOTAM has been issued.

EGLL/London Heathrow has been identified as the airport most affected in the UK by laser strike incidents with 121 in 2015, followed by EGBB/Birmingham with 94, EGCC/Manchester recording 93 and EGNM/Leeds Bradford with 77.

SKBO/Bogota has introduced a significant enhancement to the current ATC infrastructure by adding Secondary Surveillance Radar or SSR. The Columbian CAA issued AIC A07/16 to cover the upgrade. This will help increase the level of safety for operations in SKBO, especially given the terrain in the vicinity.

WZZZ/Indonesia The Visa-Free Program has expanded to Nationals from a total of 169 countries and are now eligible to enter Indonesia without a visa.  Although the regulation is silent on the allowable activities under this status, the previous version of the law restricted its use to tourism.

LFPG/Paris The first IFR LPV approach was implemented at LFPG for Runway 26L on 03MAY The new approach mirrors Cat I ILS approach minimums, including a 200-foot decision height, and it is supported by the European Geostationary Navigation Overlay Service (EGNOS).

WSZZ/Singapore has introduced a system called ATLAS (Air Transportation License and Administration System), for obtaining the application, renewal and administration of licences and permits for scheduled and non-scheduled air services.

View the full International Bulletin for 11MAY2016