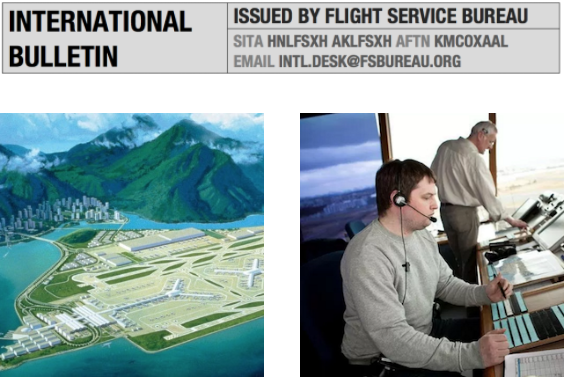 
Hong Kong capacity problems 06JUL During this year, the Hong Kong CAA has issued a couple of warnings to operators to stick carefully to their allocated slots, but it’s not making much of a difference to operations there. Read the article.

Iceland: The fun continues 06JUL Last week there were some really positive indications that the ATC strike in Iceland was coming to an end, but it’s now worse than ever, with Westbound, Eastbound, and landing traffic all affected. Read the article.

HECC/Cairo FIR A restriction exists for traffic to and from the Amman FIR, so if overflying Jordan and then Egypt, or vice versa, you can only use the waypoint METSA.

OMAE/Emirates FIR has some updated peak times. Departures need a slot between 0630-0730Z and 1700-0000Z. Arrivals will be spaced 5 mins apart during these times also, as will aircraft entering the OMAE FIR from nearby airports like Muscat, Isa, and Baghdad.

OERK/Riyadh, Saudi Arabia will be hosting the ‘Global Ministerial Aviation Summit’ 29AUG-31AUG. 55 different ministers from various countries are expected to be in attendance. Be aware of potential restrictions leading up to and after the event.

CYFB/Iqaluit Another NAT alternate favourite, CYFB has some runway closures throughout July.

EGCC/Manchester is doing some work on 05L/23R overnight until 08JUL and has advised operators to carry some extra gas due possibility of holding.

BIZZ/Iceland Despite optimistic reports of a resolution to the ATC dispute in Iceland last week, the situation remains unresolved. Last night BIRD Oceanic was closed to most Eastbound traffic once again, as was BIKF. A new addition to restrictions is a closure to many Westbound flights on Wednesday 06JUL – “DUE TO STAFF SHORTAGE IN REYKJAVIK OACC WESTBOUND TFC PLANNING TO ENTER BIRD FROM ENSV VIA GUNPA,VALDI, IPTON, INGAL, ISVIG AND EGPX VIA LIRKI, GONUT, OLKER, MATIK AND RATSU AND THEN PROCEEDING INTO EGGX OR CZQX SHALL REMAIN SOUTH OF BIRD CTA” Read the article.

EDYY/Maastricht ATC have requested crews operating through the Maastricht UIR to log on to CPDLC EDYY, if you have datalink. While voice remains the primary comms method, you might get an uplink message if the frequency is busy – it’s not a test, you should confirm – most of these uplinks are likely to be frequency changes.

EPZZ/Poland has advised operators to check carefully whether permission is required in advance of operations at airports other than EPWW/Warsaw. Many countries including Poland have reinstated Border Controls within the Schengen zone. Best advice is to treat each country as having full Border Controls for the moment (so think Passport, GenDec, etc.)

SPIM/Lima FIR (Note that the airport is now SPJC, distinct from the FIR code) is shutting down airway UG427 after 21JUL.

SUEO/Montevideo ACC (Uruguay) has some comms issues in it’s airspace, and has advised of some extreme spacing between aircraft irrespective of FL – 40nm. For now, this ends today (06JUL) but may happen again.

WSZZ/Singapore Qualifying citizens of Singapore are now eligible to apply for US Global Entry membership – and benefit from expedited entry to the United States at designated airports. Similarly, qualified U.S. citizens are eligible for enrolment in Singapore’s enhanced-Immigration Automated Clearance System (eIACS).

ZMUB/Ulaanbaatar, Mongolia is downgraded to RFF Cat 7 until 10JUL. Also, from 12-16JUL, you can’t file this as an alternate which may limit your options somewhat.

LFPG/Paris due to maintenance on the ILS for Runway 08L/26R from 18JUL to 02OCT. The only approaches that will be available will be RNAV based procedures (LNAV/VNAV, LPV, LNAV) and VOR/DME.

GQNN/Nouakchott, Mauritania has moved to a new international airport this June. Located approximately 10nm north of the city, it has an annual passenger capacity of 2 million. Infrastructure from the capital’s old airport was transported to the new one.

SECU/Cuenca Following the landing incident on 28APR of an E190, all inbound flights will be reportedly be held if the runway is wet – until end of August.

Canada/Mexico From 01DEC2016, Mexican nationals will be able to travel to Canada without a visa for business and tourism for up to 90 days.

Turkey/Russia Russia has lifted the travel restrictions on tourists between the two countries. The ban was put in place following the downing of a Russian military aircraft last year.

Bangladesh Germany, Australia and the U.K. have banned direct cargo flights from Bangladesh due to security concerns.

Israel/China The Israeli parliament has ratified a multiple-entry visa agreement with China, under which Chinese business visitors and tourists can enter Israel multiple times with the same ten-year visa and vice versa.

EZZZ/Europe the European Union updated Air Safety list (aka the Airline Blacklist) on 17JUN, and lifted a ban on Zambian air carriers.

Uganda Introduction of ‘e-visa’ system. You must show a valid yellow fever vaccination certificate on arrival.

ZJSA/Sanya FIR, China has an ADS-B trial up and running on L642 and M771. Radar is still the primary separation tool, but ATC ask that you check your Flight ID matches your FPL.