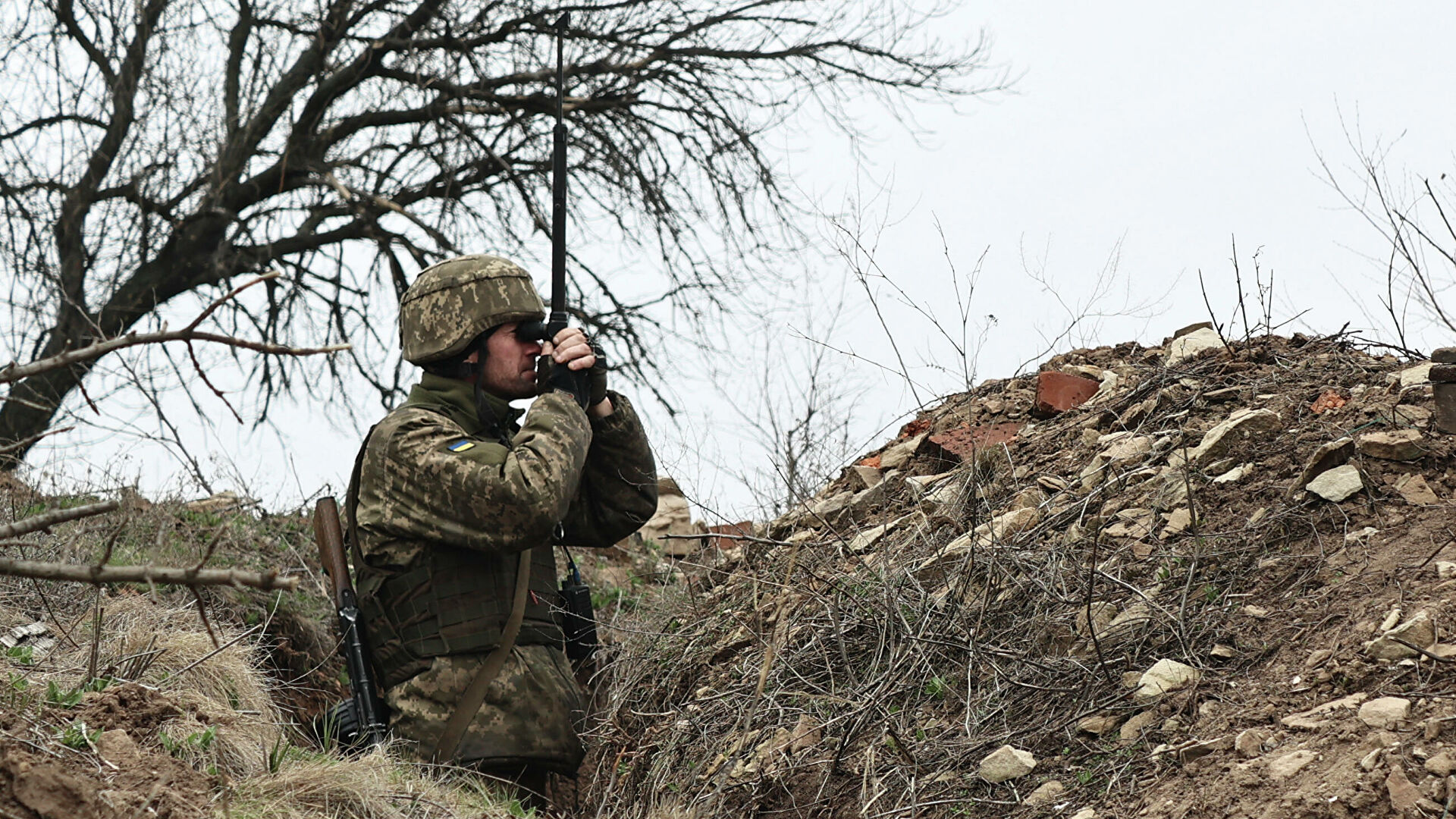 Airspace Risk: Conflicts to watch in 2022

Airspace Risk: Conflicts to watch in 2022


Conflict zone risk assessments aren’t easy. Airspace dangers are heavily dependent on what is happening on the ground, which can improve or deteriorate quickly and with little warning. For an aircraft to be at risk, there must be someone present who has both the ability and intent to either deliberately target an airplane, or endanger one indirectly.

But in order to prove that these two things are present in any given airspace, regulators and operators have to rely on intelligence and inherently limited information to make educated decisions about what is safe, and what is not.

The best defence? Know what is happening down there. Or in other words, an idea of the geo-politics playing out thousands of feet beneath you. Often the warning signs are there, even before Notams have had a chance to catch up. The best defence is always situational awareness.

Here is a summary of some the conflicts making headlines that are worth keeping a close eye on in 2022 which may have an impact on the safety of overflights. 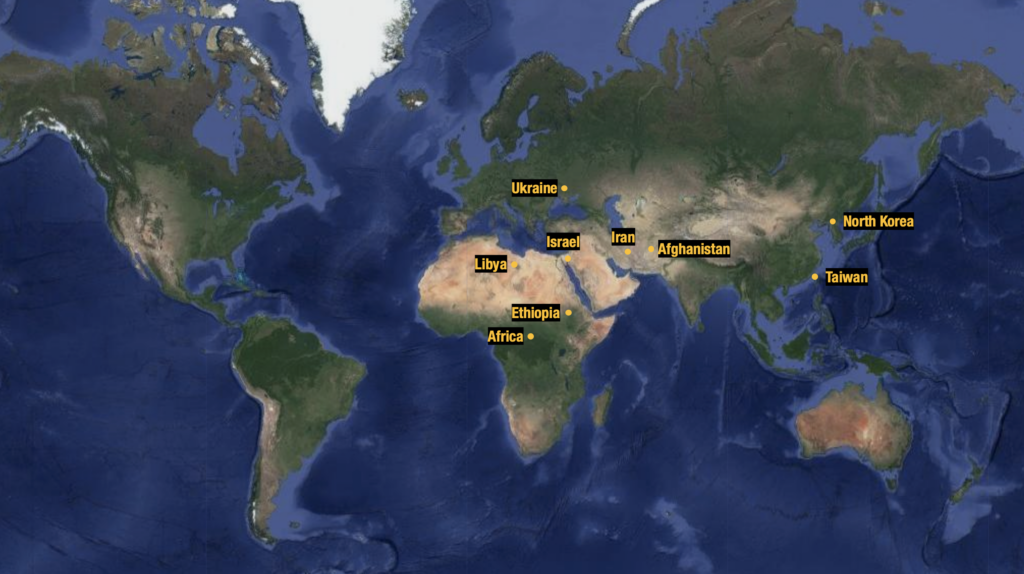 Keep an eye on these existing and emerging conflicts in 2022.

Tensions are high near the eastern border with Russia right now. In the latter half of 2021, the Russian military began to mobilise equipment and troops on their side of the border. This has continued to cause international concern that a major offensive may be possible in 2022.

There is advanced anti-aircraft weaponry present on both sides of the border which could present risks to civil aviation at all levels if things escalate. There are also separatist groups active in the region, and it is possible they have access to the same weapons. MH17 was shot down in this region in similar circumstances in 2014.

Overflights near the border – especially in the western part of the URRV/Rostov FIR near the UKDV/Dnipro FIR boundary should keep monitoring the situation closely. 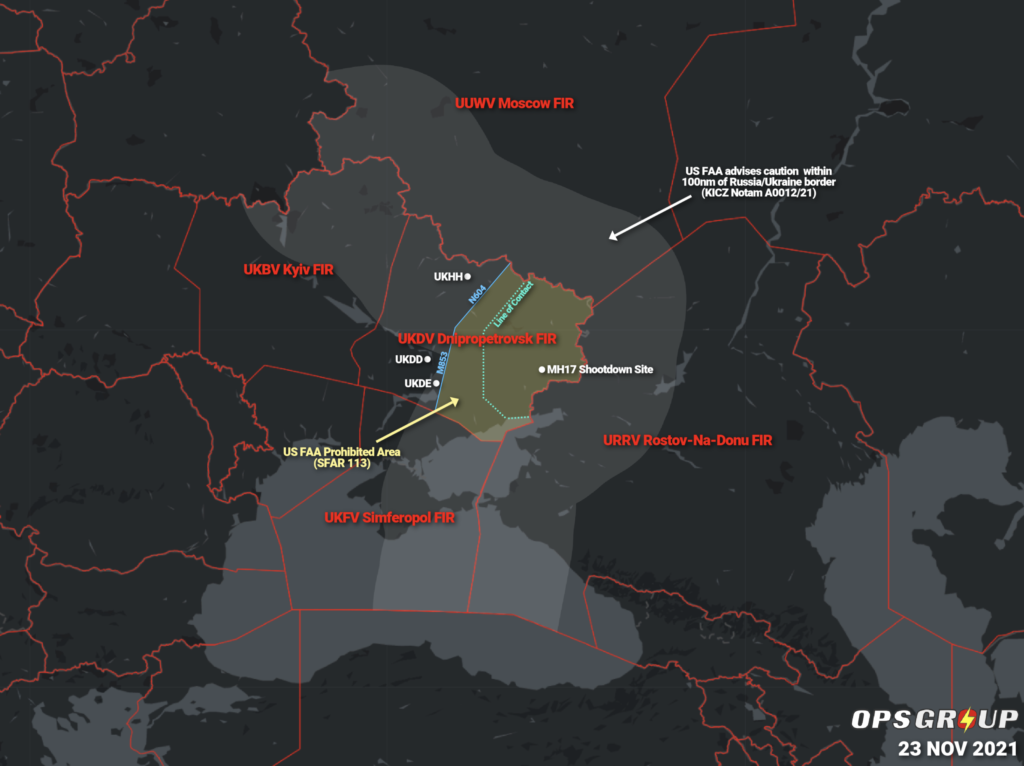 FAA SFAR 113 prohibits US operators from entering an eastern portion of the Dnipro FIR due to a risk of anti-aircraft fire.

Events in April-May 2021 lead to a sudden escalation involving hundreds of Hamas rockets being fired at Tel Aviv and Israeli air strikes in Gaza. Civilian traffic was heavily impacted, while LLBG/Tel Aviv airport was forced to close on several occasions.

Recent events have hinted that things may be no better in 2022. On Jan 1, several rockets were fired at Tel Aviv, followed by airstrikes in Gaza. Surface-to-air missiles were launched at military helicopters during the strikes.

Aircraft in the LLLL/Tel Aviv FIR may continue to be at risk from these types of events with little notice this year. 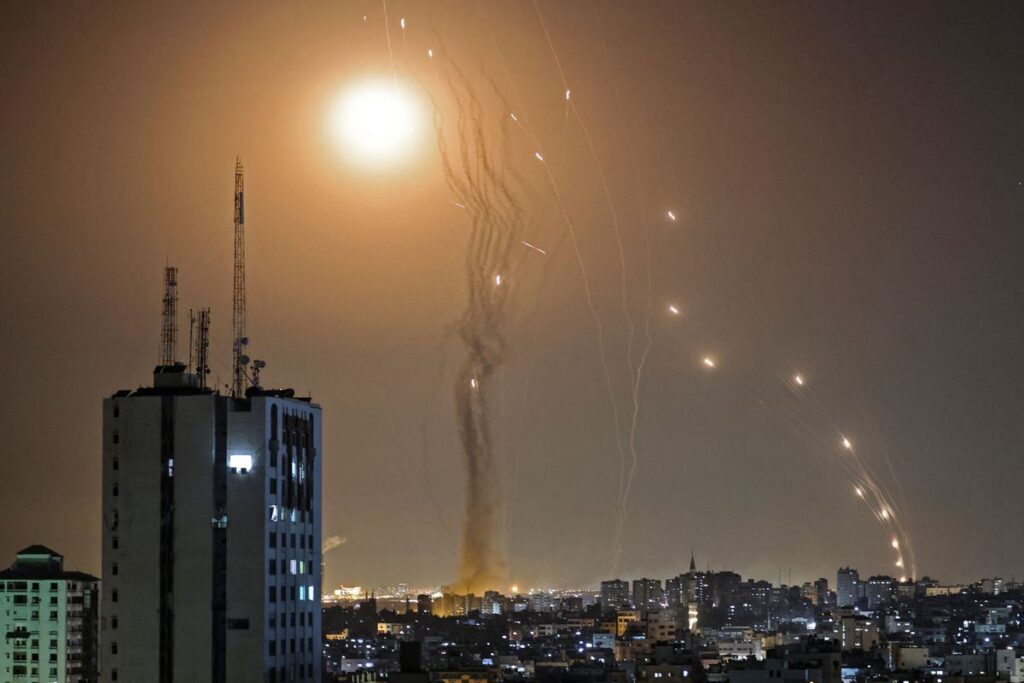 Mainland China continues to show political interest in Taiwan. While an armed conflict is still unlikely, it is not impossible. And the consequences of one would be a big deal with other major world players likely to become involved.

Last year a record number of Chinese military aircraft carried out exercises near Taiwanese airspace, while in October a wave of aircraft entered Taiwan’s air defence identification zone (ADIZ). This caused authorities to issue warnings by radio and mobilise their air defence systems.

In 2022, the primary risk to aircraft in the region continues to be risk of being misidentified by the Taiwanese military. It is important to follow the correct procedures when entering Taiwan’s ADIZ airspace. 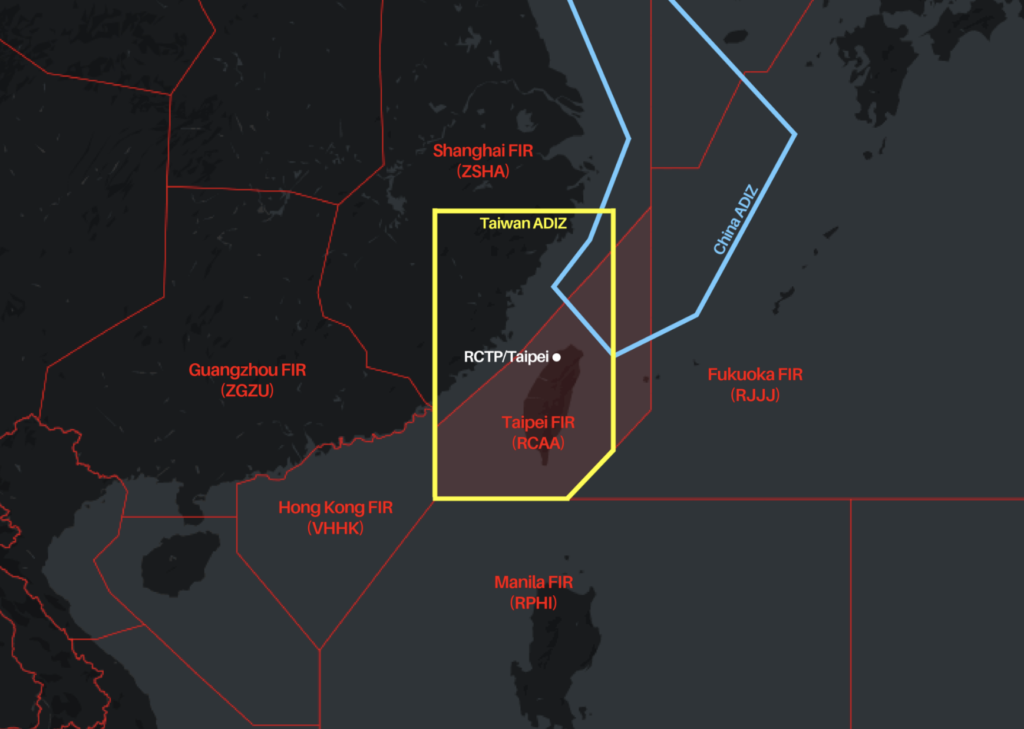 Tensions between Israel and Iran are at an all time high. Various sources are speculating that airstrikes on nuclear targets in Iran could rapidly escalate the situation. If this were to happen, the overflight risk in the OIIX/Tehran FIR would increase dramatically. Anti-aircraft weapons are present there that can reach all levels. Iran has previously shown willingness to use them during heightened tensions and in close proximity to heavily flown international air routes. In January 2020, a Ukrainian 737 passenger jet was shot down over Tehran by the military after being mistaken for a missile.

Militant groups throughout several African countries with links to terrorist organisations such as Al Qaeda or Al Shabaab have been mobilising in recent years. Often engaged in fighting with weakened states, these militia may have a desire to make international statements, and are known to actively target civilians which could include overflying aircraft.

Hotspots to look out for: In the west, Nigeria, Mali and Burkina Faso. In Central Africa, Niger, Chad and the Democratic Republic of Congo. And to the east, take particular care when operating over the Horn of Africa – especially Somalia and Sudan. New groups are also emerging in Mozambique, and Uganda.

These groups typically have access to man portable air defence systems (MANPADS), rockets and other similar weapons that pose a primary threat to aircraft at lower levels (below FL250). Although this should be considered carefully on a case-by-case basis. 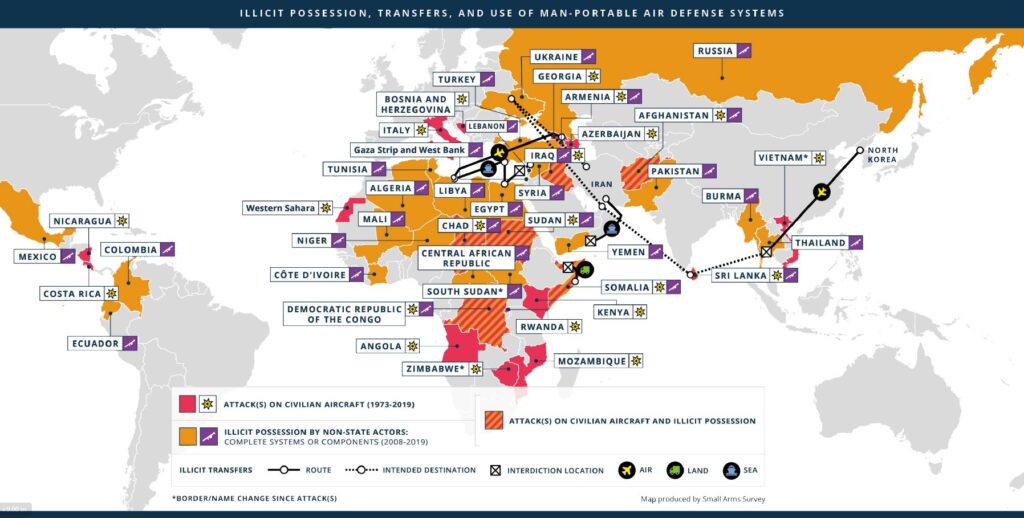 In Libya, an election has been delayed indefinitely and armed groups are mobilising throughout country, which could see the civil war escalate in 2022.

The conflict in the Tigray region of Northern Ethiopia remains unpredictable. Despite signs of improvement in Dec 2021, the conflict in the north has intensified again with military operations in western and southern Tigray. The Amhara region north of Addis Ababa is also under curfew. The 6 month state of emergency remains in place. Several states continue to warn aircraft throughout the HAAA/Addis FIR to maintain minimum flight levels due to anti-aircraft weaponry.

The situation in Afghanistan also remains volatile for 2022. The country is firmly under Taliban control, and the OAKX/Kabul FIR without ATC. A humanitarian crisis is developing there and it’s hard to predict what the international response (if any) will be, and how the Taliban might respond. Watch this space. 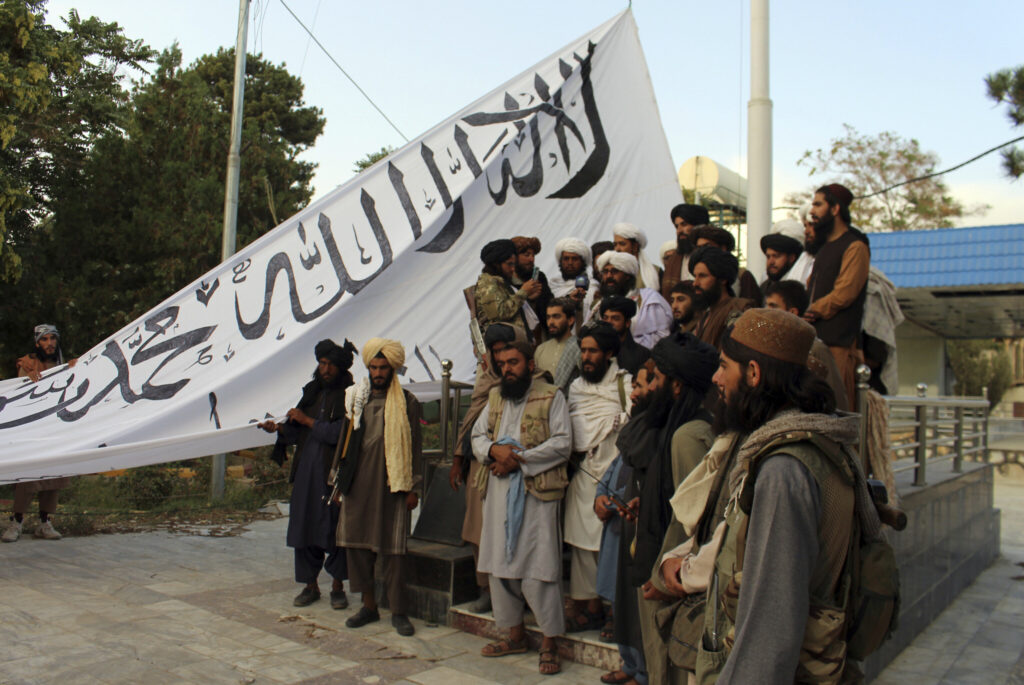 Safeairspace.net is our conflict zone and risk database. Our team updates it constantly with risk, security and hazard alerts from around the world. Click below for a full PDF briefing on hotspots around the world, or add your email to our risk briefing that goes out every second Monday. 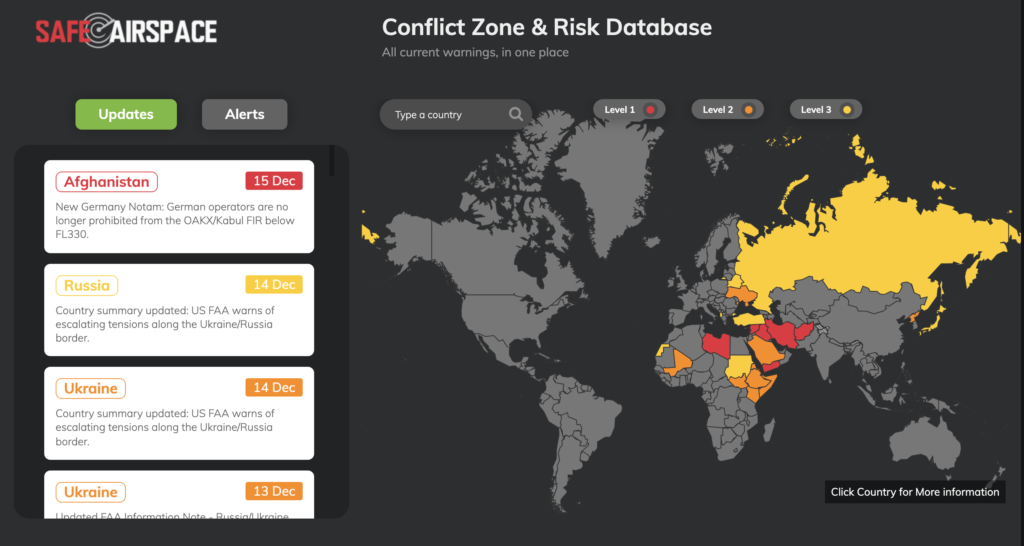 Click the image above for a full PDF risk briefing from Safe Airspace.