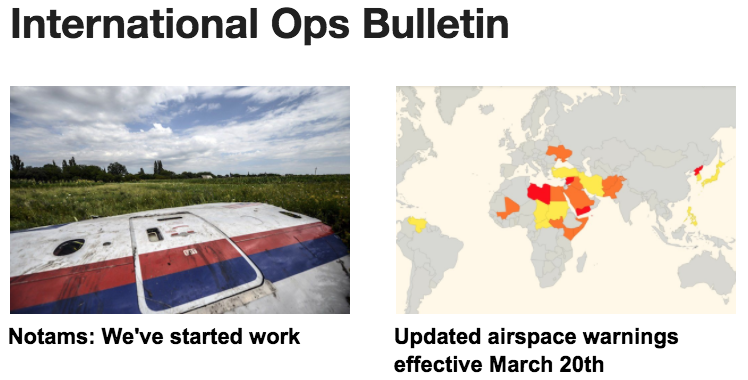 LGZZ/Greece A new rule is set to be introduced on Apr 1 for charter flights to Greece on non EU-registered aircraft with up to 19 seats. In addition to having to obtain the standard landing permit, as well as the TCO approval from EASA, you will now need to apply for an annual “Operating License” from the Greek CAA too.

LCZZ/Cyprus Many recent reports of GPS and ADS-B outages in the airspace around the boundary between the LCCC/Nicosia and LLLL/Tel Aviv FIRs, in some cases lasting up to 30 minutes. Some aircraft only reported signal anomalies once ATC advised them they were off track. If you’re headed this way – be aware.

ORZZ/Iraq The Iraqi Prime Minister has lifted the government ban on international flights to the Kurdish airports ORER/Erbil and ORSU/Sulaymaniyah. The central government will take full control of the airports and start allowing international flights to resume in the coming days. Both Iran and Turkey still have Notams in place prohibiting flights to these airports from using their airspace – we expect these to be updated soon to reflect the lifting of the ban.

YZZZ/Australia Cyclone Marcus hit Darwin on Mar 17 with winds of over 130kmh, causing widespread damage and temporarily forcing YPDN/Darwin Airport to close. The cyclone has since moved out into the ocean off the coast of Western Australia, increasing in strength, with winds of up to 230kmh. It’s forecast to slowly move southwards, potentially affecting Perth around Mar 26.

OOMS/Muscat The airport’s new terminal opened on Mar 20, and all traffic must now go there instead of the old terminal which is now closed – although at some point it will be redeveloped to be used by low-cost carriers.

KZZZ/USA As advised by FDC NOTAM 6/7196, from Mar 29 onwards, pilots operating in the Washington DC Flight Restricted Zone (DC FRZ) must now file flight plans through the FAA’s Washington Center Flight Data Unit (FDU), instead of filing a flight plan with the Washington Hub Automated Flight Service Station (Leidos AFSS), by calling 703-771-3476. This new requirement applies to flights to/from all airports in the FRZ, including KDCA/Washington.

OMZZ/UAE Long delays expected at all major UAE airports on the weekend of Mar 24-25, due to spring break holidays.

VOCL/Calicut The airport is about to start their big runway resurfacing project, which will close the runway each day between 0630-1430z from Mar 25 to Jun 15.

SAZZ/Argentina The Argentinian airline Aerolineas has suspended ticket sales to all of their destinations until Mar 25. They say multiple aircraft were recently damaged by hail in SABE/Buenos Aires, during a storm, which means they now need to reprogram their schedule until the aircraft get fixed.

KGYY/Gary The airport’s long runway (RWY 12/30) will be completely closed for repair from Apr 20 to May 21. The short runway (RWY 02/20) will remain open throughout, but it’s only 3600ft long. Gary supplements Chicago’s major airports, KORD/O’Hare and KMDW/Midway – so expect those two airports to be busier than usual during this period.

ZSZZ/China There are four airways over the Himalayas (L888, Y1, Y2, Y3) which the Chinese authorities will only let you use if you have ADS, CPDLC and satellite voice communication, and operators need to verify their equipment with them at least 60 days in advance! So they recommend that only regular scheduled flights apply to use these airways.

FACT/Cape Town It’s not showing up on the Notams yet, but all fuel suppliers at the airport are reporting that there’s currently no Jet A1 available until further notice.

VCRI/Mattala At what has been dubbed “the world’s emptiest international airport” and a failed vanity project by Sri Lanka’s ex-president, there have been recent reports of herds of elephants, buffaloes and deer regularly invading the airfield from a nearby wildlife reserve.

FAOR/Johannesburg GA/BA crew and pax not wanting to have to go through the main terminal to clear customs and immigration can now do this instead at the airport’s dedicated GA/BA FBO – Firebird Aviation.

TAPH/Barbuda The airport re-opened to commercial flights on Mar 18, having been closed since Sep 2017 following extensive damage sustained during Hurricane Irma.

EGGW/Luton A new noise curfew is being introduced, so from Jun 1 to Sep 30, arrivals/departures will be prohibited between 22-06z each night. Also between these dates, non-emergency diversions will be completely prohibited for the entire period, day and night.

GUZZ/Guinea More protests are planned in Conakry, including: a ‘dead city’ protest on Mar 20, and a rally along the Fidel Castro Highway on Mar 22. Following disputed elections held on Feb 4, there have many sporadic demonstrations across the country, with reports of violent clashes, including some fatalities, in the northern suburbs of Conakry.

MKZZ/Jamaica Yet another ‘state of emergency’ has been declared in Jamaica, this time around the Spanish Town area. It’s set to last until Apr 4. A major security operation is now underway, in response to recent violence including shooting incidents. Travellers are being told to avoid the area.

RPZZ/Philippines Expect disruption to travel and business activity from Mar 25 to Apr 1 during a week of public holiday known as ‘Holy Week’. Make sure all hotels and local travel is booked in advance, and expect most government offices, banks and private companies to remain closed or to operate reduced hours.

PGUM/Guam The FAA is initiating a TFR from Mar 18 – Mar 25, and one border runs parallel with the runways at PGUM. The TFR extends up to FL200, just north of the airport.

HAAB/Addis Ababa A fuel shortage is expected beginning Mar 19, due to protests by the delivery truck drivers.